Waspo Hannover is the eighth team that qualified for the Champions League Final Eight in Belgrade.

The German champion defeated Dinamo Tbilisi in the clash of the rivals for the 4th place in Group B. Dinamo had a 3-goal advantage, but Waspo was able to come back, and secure a 7:6 win after scoring four straight goals in the last ten minutes.

Jadran Herceg Novi upset Brescia (7:6). This win couldn’t help the Montenegrins move from 6th place in Group B, while Brescia is out of the race for 1st place.

Olympiacos defeated Marseille 11:7 in the last round of Group A in Ostia. That means that Olympiacos finishes 3rd, while Marseille is in 4th place in this group. The Preliminary Stage in Group A was closed by a derby Pro Recco – Jug. The Italians recorded a narrow 12:11 win and kept the perfect record – 10 wins in as many games.

Olympiacos goes to Belgrade from 3rd place in Group A after a convincing win over its direct opponent in the battle for position 3. The Greeks controlled the game most of the time, and broke the rival in the second half.

Marseille went in front just once. In the 4th minute, Ugo Crousillat scored an action goal for 2:1. But, Morukis equalized immediately, while Genidounias opened the second period with two goals to give Olympiacos a 4:2 advantage. Marseille managed to catch up with the rival for the last time at 4:4. Mourikis closed the second period with his 2nd goal to put the Greeks ahead (5:4). The third quarter started with two quick goals on both sides of the pool and the score was 6:5 in the 18th minute. After that, there were no goals for a while. Olympiacos built an 8:5 advantage late into the third period. Max Irving scored for 9:5 after less than two minutes of play in the fourth quarter, which was the end of the contest. Olympiacos kept a 4-goal distance until the end. 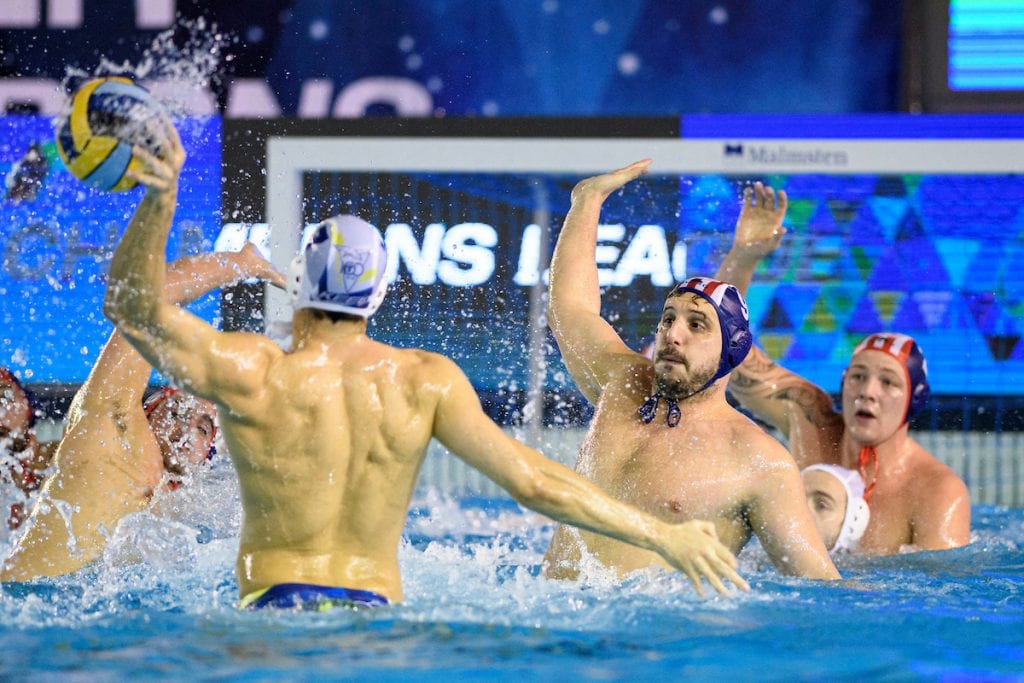 The clash of the two water polo giants was just a game for pride. Two days ago, Pro Recco cemented the top spot in Group A, while Jug secured 2nd place yesterday. Still, both teams had their motives. Recco wanted to finish the Group stage unbeaten, while Jug wanted to prove that an embarrassing 3:18 loss to Recco in the second “bubble” was just a bad day.

All in all, the game was interesting, although the score couldn’t change the standings. Both teams can be satisfied with the outcome.

Jug dictated the rhythm in the first quarter and a half, and it had a slim lead a few times (1:0, 3:2, 4:3, 5:4). After Jug’s fifth goal in the 11th minute, the Italians tightened their defense. Recco’s goalie Marko Bijac, former Jug’s captain, posted several excellent saves (including one penalty shot). Recco held the Croats goalless for more than 11 minutes. The Italians scored three goals in the last three minutes of the first half and had a 2-goal advantage at halftime (7:5). 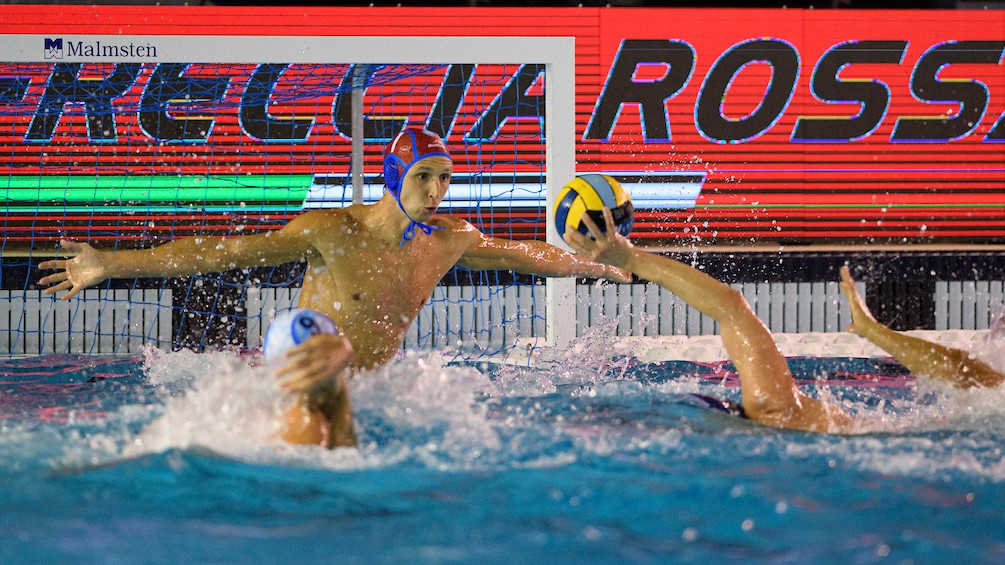 Defenses dominated the third period. Alexandros Papanastasiou broke the deadlock in the third period by scoring from a penalty shot 02:24 minutes before the last break. Shortly after, Merkulov and Obradovic added a goal each and the Croats were in front again (8:7). But, Mandic equalized 33 seconds before the end of the quarter.

Four and a half minutes from the end, Recco built a 2-goal lead (11:9). Jug narrowed the distance two times (10:11 and 11:12), but the Croats’ last goal was scored too late – the youngest in the team Ivan Vukojevic found the net for 11:12 with 23 seconds remaining on the clock. After that, Pro Recco didn’t shot towards the goal. The Italians kept the ball and the win.

The duel between the teams which had no chances to advance to the F8 offered an interesting battle with a lot of twists and turns. Spandau started better and gained a 3:1 lead in the 8th minute (for the first and the last time, the distance between the teams was two goals). The second quarter belonged to Ortigia, which entered the final period with a slim 8:7 advantage. Still, Spandau earned the point, as Kholod scored an action goal in the 29th minute to set the final score.

If Barceloneta had won a point today, it would have mathematically secured the top spot in Group B. But, the Spaniards left the pool empty-handed.

Barceloneta managed to equalize just once – 1:1 (3rd minute). In the remaining 29 minutes, Ferencvaros was always in front, but the Spaniards weren’t far from a point. The Hungarians’ defense was outstanding in the first half and earned a 4:2 lead before the third quarter. Barceloneta’s Munnariz scored an extra player goal after 23 seconds of play in the third period to half the distance, but Denes Varga and Ioannis Fountoulis gave the hosts a 3-goal lead (6:3) by the middle of this period.

Ferencvaros maintained a three-goal difference until the fourth quarter (7:4). Still, Barceloneta was able to come back and reduced the gap with two quick goals in the opening two minutes of the final quarter (6:7). Three minutes before the end, Ioannis Fountoulis a nice action goal from the left-wing for 8:7. It was the Greek’s fourth goal in the match. But, Barceloneta still had chances to win a golden point. Alvaro Granados made it 7:8 with 01:54 minutes to go. The Spaniards had a great opportunity to equalize with a man up in the last minute, but Denes Varga blocked Mallarach’s 39 seconds before the end. In the remaining time, Ferencvaros managed to keep the ball, and didn’t let Barceloneta have the last attack. Just eight seconds from the end, Martin Famera blocked a shot by Nikola Jaksic. Still, that was something that the Hungarians planned, as they managed to grab the ball after that block and earn a new possession. They kept the ball until the end of the match and climbed atop the group.

After Hannover announced that it couldn’t organize the F8, the German club lost its guaranteed spot at the final tournament. Still, Waspo booked a ticket for Belgrade after a great comeback in the crucial match for 4th place.
Hannover needed a point in today’s game to achieve the goal. Both teams had their ups and downs. The first half was balanced. It stood 1:1 in the 13th minute, and then, the quick exchange of goals started. Hannover took a 2:1 and 3:2 lead, but Dinamo’s Saric equalized three seconds from the end of the 2nd quarter. 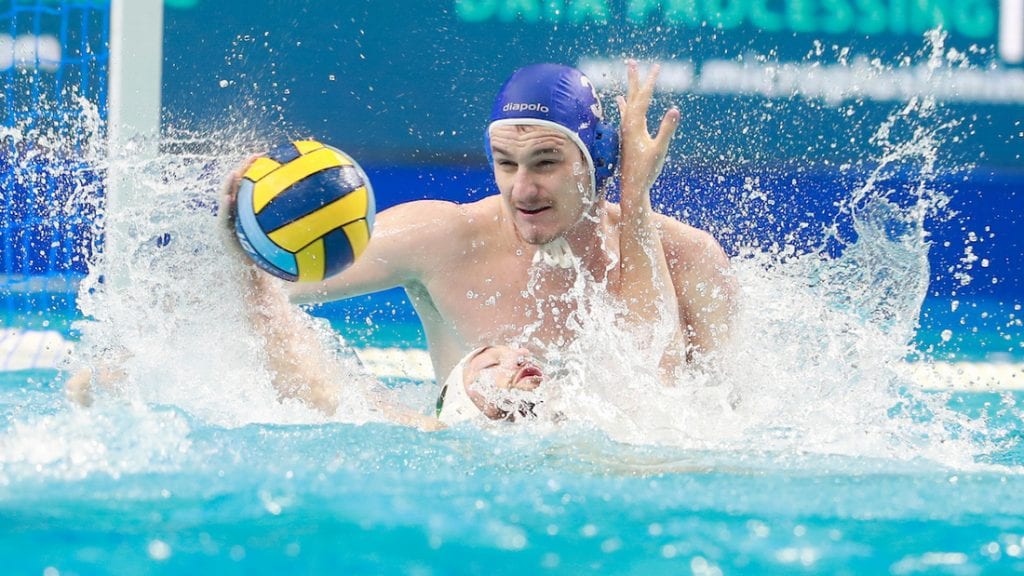 Dinamo dominated the third quarter and earned a 6:3 lead. It seemed that the Georgians would win and take a ticket for Belgrade. However, Hannover started coming back with a goal by Darko Brguljan in the 22nd minute (4:6). Midway through the fourth quarter, Petar Muslim, who was the man of the match, netted two back-to-back goals and leveled the score (6:6).
Ivan Nagaev gave Hannover a 7:6 lead with 47 seconds remaining on the clock and everything was over for Dinamo. Hannover started celebrating.

Jadran produced the biggest surprise in the 2020/21 Champions League by beating Brescia.
The Montenegrins were out of the race for F8, before this match, while Brescia was still one of the contenders for 1st place in the group.

But a young team of Jadran controlled the match for most of the time and achieved a well-deserved win. Brescia paid for many mistakes made in this match. 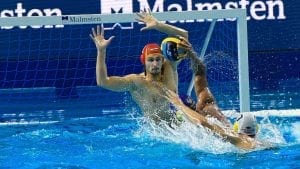 The game started as expected. Brescia scored an opening goal, but Jadran responded with two to earn a 2:1 lead. Still, the teams entered the second quarter from the same starting point (2:2). There were no goals n the second period. Jadran regained a lead early in the third quarter (Radovic – 3:2), but Maro Jokovic converted a penalty shot to back the terms on equal – 3:3 (21st minute). Still, Brescia couldn’t find the net in the following seven minutes, while Jadran scored three goals in a row and jumped to 6:3. In the middle of the final quarter Alesiani scored from a counter-attack for 4:6. Renzuto converted a man-up for 5:6 with 01:47 minutes to go (it was Brescia’s first goal from a power-play advantage after six missed chances). That boosted the Italians’ hopes. But, Dusan Banicevic responded immediately in the same way, with an-up, and Jadran went 7:5 up. Brescia’s consolation goal came too late, just 14 seconds before the final buzzer.

Schedule until the end of the Preliminary Stage