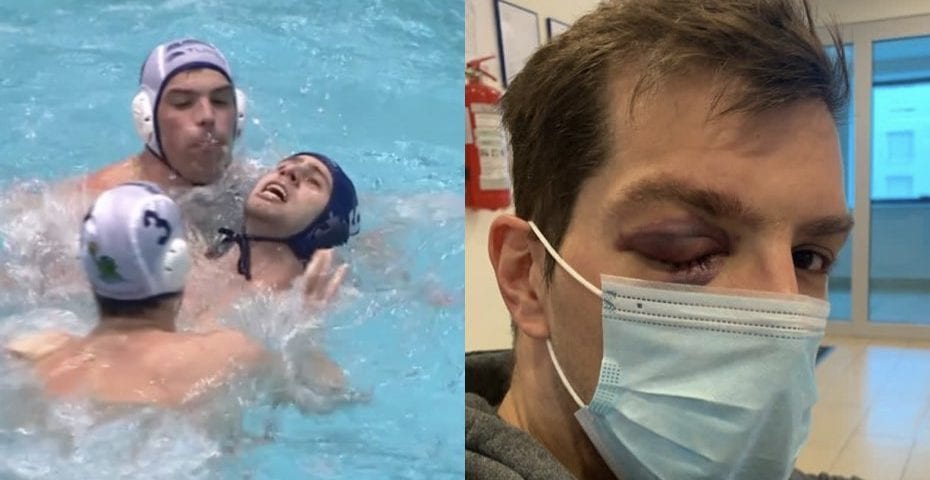 This weekend one of the biggest clashes in the world of water polo was played in Zagreb. Jug AO won against Mladost 11:10, secured the first position and gained a home ground advantage in the potential final series. The day after the game Croatian mainstream media highlighted the incident of Lovre Milos’s brutality foul in the  2nd quarter against Jug’s Alexandros Papanastasiou. Mladost released the following press statement and photos of an injured Ante Viskovic: 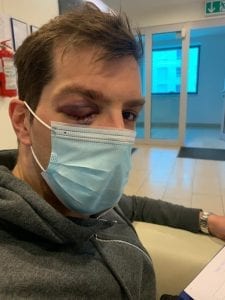 “In the recently played match between HAVK Mladost and Jug Adriatic Osiguranje in the Croatian Championship at the Zagreb Mladost swimming pool, there were unpleasant clashes in the water. HAVK Mladost condemns any form of violence, even in the heat of battle. Namely, in the match played last Saturday, after several consecutive provocations and underwater kicks, Mladost’s player Lovre Miloš, reacted in an inappropriate way and returned the blow towards Jug’s player, Alexandros Papanastasiou.

In the third quarter, an even worse, brutal attack by Jug’s water polo player Paolo Obradović on Mladost’s player Ante Visković took him to the hospital and out of the pool for more than ten days, for which Obradović was not sanctioned.”

“My reaction, in the heat of the struggle and the heated atmosphere was inappropriate. I apologize to Jug’s player Alexandros Papanastasiou, as well as the public and the fans of both teams. There is no place for violence on sports fields and I hope that we will not watch scenes like this again”, said Lovre Milos.

“All players and the management of HAVK Mladost believe in fair play and call for calming tensions and a peaceful continuation of the season” which ends the statement of the HAVK Mladost.

What do you think about these incidents? How do you evaluate the situation?
Watch the video, tell us about your judgement below, and find out what the community thinks about the situation described in the statement.

HAVK Mladost will play their next game in Euro Cup this Wednesday against Vouliagmeni in Zagreb.