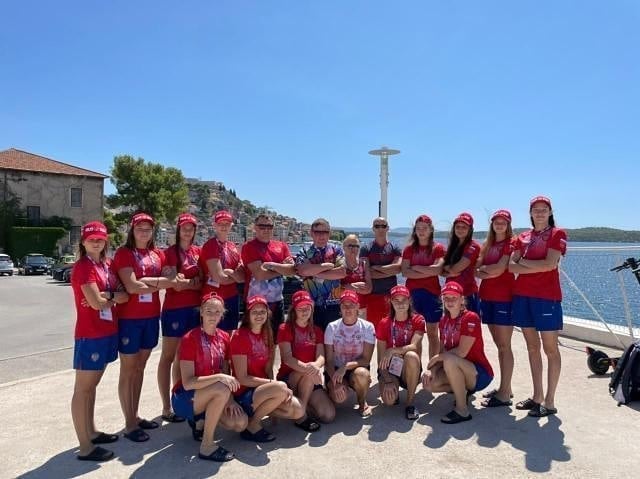 As the sun set’s on another Women’s European Junior Championship, we have our medalists in Sibenik.

Russia are the Women’s European Junior Champions for the fifth time in their history after bossing the final against a very respectable Greece side. They are well deserved of their win, and on the night, they had too much quality for Greece.

In the Bronze medal match, a strong start proved key for the Hungarians as their Women’s Junior team copied their senior teams in winning Bronze.

Russia are crowned Women’s European Junior Champions after a dominant win against a skillful Greek side. Mikhail Nakoryakov’s girls are the fifth Russian side to win the competition as Russia become continue to become the most successful side in the history of the competition.

Greece took the lead through Nefeli Chaldaiou, but Russia stayed resolute and netted three times to win the quarter 3-1 – the goals coming from Valeriia Savisko, Daria Savchenko and Anisa Sharafutdinova.

Despite a great first quarter, the Greeks were the ones who scored what turned out to be the only goal of the second quarter, courtesy of Foteini Tricha’s man-up conversion to make it 3-2 at half-time.

Russia, however, were keen to rectify their mistakes of two years ago, when they lost in the final to Spain in Volos. They scored four times in a row to take command of the final. Christina Siouti pulled one back for Greece, but Daria Bunakova’s penalty with two minutes to go in the period made it 8-3 to put the gold medal within Russia’s reach.

Then, into the fourth quarter, it was all over – Viktoria Guskova converted from Siouti’s exclusion before Daria Savchenko converted from the penalty spot to seal the game. Savchenko then scored again to make it 11-4 to rub salt in the wounds, and while credit has to go to Greece for scoring four in the last two minutes, the game had gone long before the fourth quarter.

For Russia, this is yet another example of their fantastic factory line of outstanding female players. This is the fifth Gold medal and they were, by far, the best team at the competition. From a Greek perspective, they deserved to play in the final but ultimately were a little dazed by how strong the Russians were. But this takes nothing away from the job that Alexia-Anna Kammenou has done.

Hungary have won the Bronze medal in Sibenik after beating Italy thanks to four goals each by Tekla Aubeli and Panni Szegedi. Marton Benczur’s side have matched their nations results from 2006, 2010 and 2017 by securing third place – Hungary’s eighth medal in this competition.

Aurora Lungo scored first for the Italians, but a goal from Aubeli and two for Szegedi gave Hungary a 3-1 lead after the first period.

Hungary then rushed to a 6-2 lead in Q2 with another goal from Szegedi and scores from Flora Fekete and Eszter Macsai. Emma De March pulled two back for Italy in the same period but had her penalty well saved by Hungary’s keeper Szonja Golopencza.

Two goals early in the third period from Morena Leone brought Italy back within two with the score at 8-6, but three goals in as many minutes from Hungary via Aubeli, Jonkl and Hnatyszyn put the Hungarians well on course for the podium.

Tekla Aubeli then added her fourth thirty seconds into the last quarter to make it 12-6 and all but secure the medal, and despite the best efforts of De March and two goals from Greta Bovo, it was too little, too late for Giacomo Grassi’s side.

It is no doubt a great victory for the Hungarians, who had a torrid time in Volos two years ago, finishing only ninth. With their senior women securing the Bronze in Tokyo, and the OB I being as strong as ever, there is much to be cheerful about with regards to the future of Hungarian women’s water polo.

For Italy, they could not emulate the finish they had in 2019, but they were beaten by a really solid side and can be proud of some of the results they got this week – notably the Spain victory in the Quarter-Finals.

The week has gone from bad to worse for the Spanish as the double reigning champions finish in 6th after losing to the Netherlands. It was the Dutch captain, Noa De Vries, who caused the most damage for the Spanish, scoring five times, while one of the best players at the tournament, Lola Moolhuijzen, added another four goals to her overall tally.

Needless to say it is a hugely disappointing finish for the Spanish, who were certainly expected to medal this time around. There is no doubt, however, Spain is still amongst the top producers of female players in Europe, and many of their young players, such as Elena Ruiz, are making a big impact across the Spanish league.

The hosts Croatia have hit a new high as they defeated Israel to finish 7th at their home games. Their player of the tournament, Iva Rozic, once more led them to victory, netting five goals to put her amongst the tournament’s top goal-scorers.

The game was a relatively close and cagey affair, until midway through the third quarter, when Croatia scored four unanswered goals in as many minutes.

Israel put up a decent fight in the last quarter, with Alma Yaacobi grabbing herself two more goals, but in the end, it was a tame and underwhelming performance for the Israelis who finish the games in 8th – going two better than their 10th finishes in 2017 & 2019.

Germany squandered a 6-3 lead at half-time to give France a very respectable ninth-place finish. France were uncharacteristically terrible in the first half but played how they had done for much of the week in the second, to secure a very decent ninth place in Sibenik.

A spirited fightback, and five goals from Katarina Grezdova, was not enough for Slovakia to overcome a strong Serbian side – who very nearly lost the game despite taking a five-goal lead in the second quarter.

However, last quarter conversions from Jana Lujic, Milica Zeljic, Iva Marinkovic and Tijana Lukic sealed the win for the Serbs, who will be grateful for the win – despite failing to finish in the top six as they did at the previous two championships.

Do you have Women’s Water Polo News? Contact the author to have your story shared!