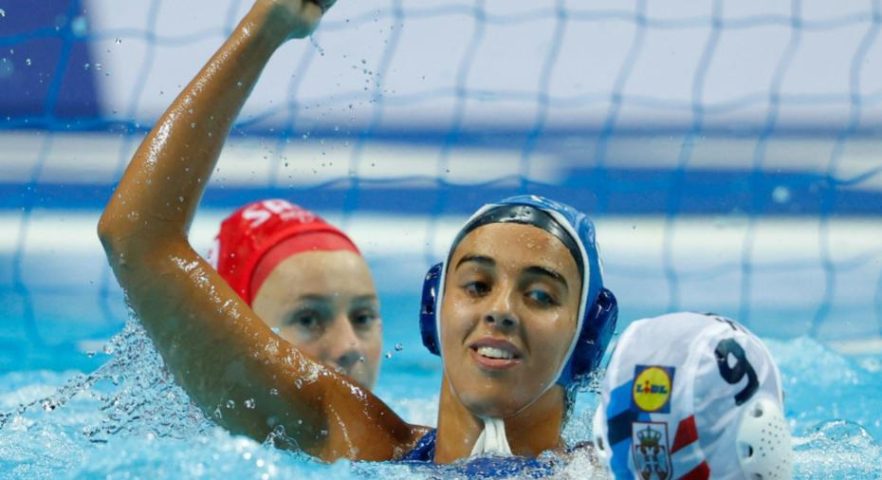 Eight teams have progressed to the quarter-finals in Split on the final day of the women’s group stage at the European Championships,

On a day that again showcased a number of wildly uncompetitive results, the games were underpinned by quick starts from many teams; the Netherlands took a 9-0 lead in the first period against Germany, while Spain built a 8-0 tally against Slovakia after eight minutes. In Hungary’s opening quarter, they rushed to a 7-0 advantage against Romania, before Greece and Croatia were separated by seven goals (9-2) in the same amount of time. Italy and Israel both matched each other in establishing 5-0 leads in their games; against France and Serbia respectively.

Even the highly anticipated fixture in Group B between Israel and Serbia ultimately turned out to be a non-contest; owing to a mix of excellent play by the Israeli’s, and some poor play by the Serbs.

And so, with the group-stage complete, eight teams progress to the quarter finals.

The Netherlands and Italy progress as the top seeds in each group; both undefeated. The Dutch will face struggling France, while the Setterosa will play the host’s Croatia.

However, the really tasty encounter though in the quarter finals will feature Hungary and Spain. The Magyars had a terrible start to the competition, and this tough quarter-final draw is the consequence of those two-straight defeats. However, Spain have been beaten already in Split, by Italy, and are not infallible. Despite the poor form, Hungary still have the potential to beat any of the teams in Split. It will be a fascinating contest.

Greece and Israel is the other quarter-final bout. Greece will be favourites; they have played well in Split, despite that earlier loss to the Netherlands – a game that saw a slightly flattering scoreline for the Dutch. Israel have impressed too though, and if they can start well, might have an outside chance against the Greeks. 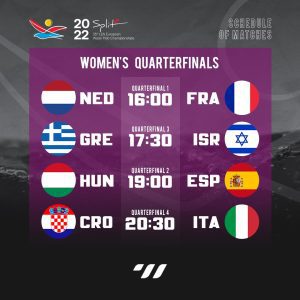 Hungary finished their preliminary round with a clean sheet; completely outclassing Romania 22-0. After a poor start to the tournament, the Hungarian players will have thoroughly enjoyed boosting their stats in the match, with:, Horvath (3), Parkes (3), Farago (2), Mate (2) all registering multi-scores.

Attila Biro’s side cruised through the game, not facing a shot from the Romanian’s inside the first fifteen minutes.

Five more goals from Greta Gurisatti takes her tournament tally to nineteen, while Dorottya Szilagyi, freshly recovered from a nasty mouth impact injury that required stiches, marked her return to the side with three scores.

Mariia Dvorzhetska saving Dora Leimeter’s penalty in the second period was practically the only thing the Romanian’s had to cheer, in an otherwise miserable morning.

It must be remembered that Romanian surprised many people in even qualifying for the tournament. To believe at this stage that they could compete with a team like Hungary, player for player, is simply just not realistic. 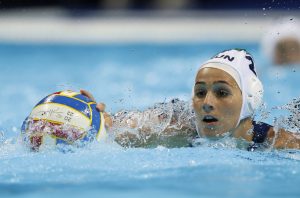 Greece were in scintillating form in the 17:30 game against Croatia, beating their opponents by twenty scores (24-4). While there is no doubt that Croatia have impressed everyone this week in the pool, today’s game was a bit of a car crash for them .

On the contrary, Alexia Kammenou will be pleased with her selection, who scored an incredible nine goals from their first ten attacks in the first quarter, which pretty much set the tone for the rest of the match. Additionally, the Greeks found the back of the net with all seven of their extra-player scenarios. With Greece in the mood, and the calibre of attacking options they have at their disposal, it’s no surprise that Croatia couldn’t lay a glove on the Greeks.

The game for the Greeks was somewhat overshadowed by a moment of madness by Maria Myriokefalitaki – who with nine seconds to go in the game, appeared to lash out at Matea Skelin with a few punches. The referee did give an exclusion to Myriokefalitaki in the moment, but given what we saw yesterday with Vincenzo Renzuto, the 21-year-old  centre should probably be expecting punitive sanctions in the coming days.

Croatia will not be happy with how they played today. They are not expected to beat teams like Greece, but they need to use games like tonight, having already booked a place in the quarter-finals, to experiment in finding ways to be more competitive, and stay game longer. The result does not bode well for their quarter-final duel with Italy in 48 hours. 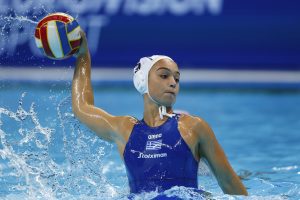 The last game of the day in Group A saw the Netherlands obliterate Germany 29-3. The game was one of the most one-sided matches you’ll ever likely see, with the Netherlands scoring at will  to remain undefeated in Split.

After a horror 9-0 lead for the Dutch in the first quarter, you wondered if we might have to consult the history books for the biggest ever defeat at a European Championships. Luckily for the Germans, the Dutch only converted 67% of their 43 shots – had it been more, we could have been looking at scoreline even uglier than the one we got.

Kitty Joustra, a member of the European Championship side that won gold back in 2018, was the top scorer in the game with five goals.  Brigitte Sleeking, Maartje Keuning and Sabrina Van der Sloot all netted four goals.

When looking at the stats, you might be feeling bad for Nina Ten Broek. The 20-year-old player of Terrassa was the only outfield Dutch player not to score, despite unselfishly providing six assists for her team. You might also be wondering what could have happened if Simone Van de Kraats had been playing, who will no doubt be disappointed not to add to her 15 goals already at the tournament. However, in the grand scheme of things, Ten Broek and Van de Kraats will be feeling a whole lot better than the German players after this one. 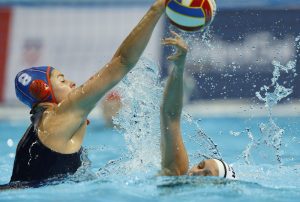 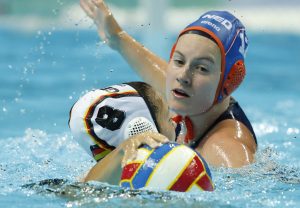 To the only game of the day with any real significance, Israel confidently defeated Serbia 15-4 to qualify for their first ever European Championship quarter-finals. The Israeli’s were a thousand times better than Serbia in every facet of the game today, and are worthy of their place in the final eight.

Going into the game, the match had real promise to be a close encounter between two nations with big aspirations for their women’s national teams. But the game that transpired at the Spaladium was really not close, and from the start, Israel appeared more alert, more cohesive, and most alarmingly for Dragana Ivkovic, more hungry for the victory.

And the hunger of the Israeli team was evident from the very first whistle – with Dimitros Mavrotas’s side amassing a 5-0 lead in the first quarter (Yaacobi 2, Kordonskaia, Sasover and Hochberg). From there, they controlled the game to the finish with some particularly incisive attacking play.

The manner of the defeat is as damaging for Serbia as the fact they have failed to make the quarter-finals for a fourth successive European Championships. With the ball in hand, Serbia were sloppy; their movement was too slow, and missed too many passes. In defence, their drop at centre was totally ineffective, as was their ability to deal with some clever arc movement by Israel. 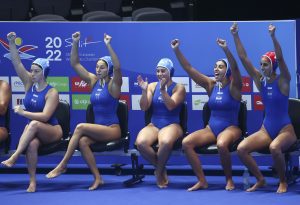 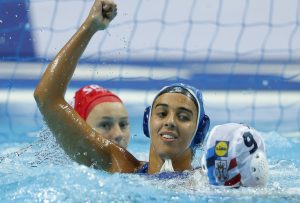 The reigning European champions this morning defeated Slovakia 26-3 with a impressive all round performance. Spain were clinical in attack, with a 76% conversion rate, while solid at the back, conceding just the single goal.

There were goals aplenty for every outfield player for Spain, but there were some particularly big goals hauls by Spain’s bigger names. Its not hard to see why Maica Garcia was last year voted as LEN’s player of the year – the 32-year-old Sabadell attacker put six more goals to her name, doubling her number of goals in Split to twelve. Meanwhile, Paula Camus bagged five, and the Spanish leagues most prolific scorer, Judith Forca, hit the target four times.

The goal that Slovakia did score what somewhat fortunate, although not entirely undeserved; Karin Kackova’s seemingly tame shot eventually struck the post, and then Laura Ester, before diverting past Spain’s experienced keeper. 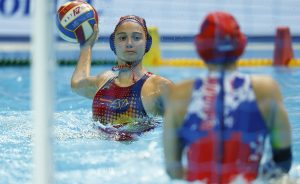 In the final game in Group B, Italy tore France apart, 19-6.

A quick start out the traps helped Carlo Silipo’s side dominate early on, with five goals from five different scorers in the first quarter (Palmieri, Viacava, Marletta, Picozzi & Avegno) putting the Setterosa in command.

The intensity dropped in the second period, which allowed the French to stop the rot. But into the third period, Italy put their foot back on the accelerator, and braces from Sofia Giustini and Giulia Viacava, the latter of whom to complete her hat-trick, and Italy were home and dry.

France had a fair few chances in the match, but they didn’t at all take enough of the chances that came their way to deserve anything from the game. Its obvious that this French team, while very talented in areas, still does not have the capability of matching, or even competing against Europe’s elite.

But with all things considered, both will progress to the quarter-finals, and to face very different opponents; Italy will relish playing against the hosts Croatia, while France have an unenviable assignment against the Netherlands 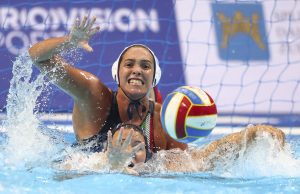 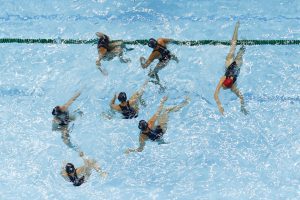