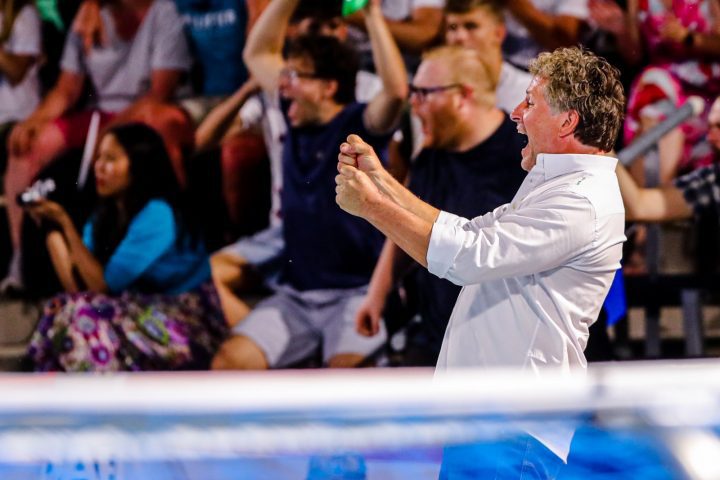 Hungary have beaten the Aussie Stingers by a single goal, and set up a duel with the Netherlands in the Semi-final.

In a really enjoyable spectacle, even despite a low number of goals, the Hungarians were pushed all the way by Paul Oberman’s developing Aussie Stingers.

There were impressive performances from Natasa Rybanska, Rita Keszthelyi and Vanda Valyi for the hosts. Keszthelyi scored a hat-trick, while Rybanska netted a brace.

Australia were more than competitive tonight, and gave an excellent account of themselves. The only frustration for the Aussies might be the number of opportunities they didn’t take advantage of. Oberman’s side were also guilty at times of being ill-disciplined, giving too many exclusions at the back, and in counter defence.

Bronte Halligan netted three for the Aussies, and really was enjoyable to watch this evening. She is pivotal to this group of developing players. Gabi Palm also made a number of really strong saves, perhaps without which the scoreline may have been slightly wider.

The Aussies really meant business at the start of the game. Their intent was clear in defence, pressing really high. Matilda Kearns, who is coming off the back of a very successful season with USC Trojans, was the first name on the scoresheet. The Stinger did well to hold off her defender at centre, and fired past Magyari.

But Hungary got back into the game, to a huge ovation from the Hajos crowd. Vanda Valyi, who is incredible quick over the water, did all the work in drawing the keeper, before Keszthelyi-Nagy fired into an empty net.

Vanda Valyi herself then made it 2-1 to the hosts from a Bridget Leeson-Smith exclusion, with a classy finish into the top left-hand side of Gabi Palm’s goal.

However, the Aussies came to play, and turned the game on its head. Halligan scored one of her traditional goals from the top-right of the perimeter, not before Zoe Arancini, the Aussie skipper, finished well at centre.

There was an air of frustration from the Hungarians in the second period. The Aussies were doing well to keep the Magyars at bay – with Gurisatti, Valyi and Mate all having shots saved with relative ease by Gabi Palm.

Eventually the Hungarians did make the breakthrough though, and it was Rita Keszthelyi who found herself on the right. Her powerful shot over her body was enough to beat Palm in the Australia goal.

The third quarter was significant. Neither team could pull away from each other. And for much of the quarter, it was more like a swimming gala.

But eventually Hungary nipped ahead on the extra-player scenario – Tilly Kearns was excluded perhaps harshly on the counter-defence, but Vanda Valyi had a direct line of sight to execute a powerful and accurate cross-cage shot.

And with an attack left in the period, the Hungarians had a two goal lead for the first time. Lena Mihailovic was dismissed, and a very swift and deliberate move from Attila Biro’s ladies led to the ball landing at the arms of Natasa Rybanska – who sniped the ball past Gabi Palm.

An early penalty, converted by Halligan, kept the Hungarians on their toes, but Rybanska ensured that the Australians were still two scores away. A well-taken goal from Abby Andrews on the right put the pressure on the Hungarians.

But the big moment came with 75 seconds left in the match, when Rita Keszthelyi replicated an earlier shot that was also successful in beating the Australian goal keeper. From the right, the ball nestled in the bottom right-hand corner, to deafening cheers from the several thousand Hungarians in the crowd.

Bronte Halligan scored her third with 20 seconds left, but the goal was just a consolation, as the Hungarians had done enough to win the match.

Bronte Halligan (Australia) – “I think it was a really good game. The Hungarian crowd and fans were insane tonight, it was such a cool thing to be a part of no matter the result or the outcome. We are a young team and this was the best experience of our lives to play against Hungary in a quarter-final at a lot of these girls first World Championships. Hungary played a really good game, both teams defended really well.

Greta Gurisatti (Hungary) – “It was a really hard game for us because the australian team is so strong and physical. In the first period we felt it would be a naturally easy game, but we woke up. Our defence was amazing. The goalkeeper was amazing, the blocking were really good. I feel I am really tired, but there is a lot of people to cheer for us, so it is an amazing feeling for us.”

Paul Oberman (Australia) – “We played a really good defensive game. Unfortunately we couldn’t score enough goals today, so many hit the post. Congratulations to Hungary, they played better than use today. It was a fantastic learning experience for my players. They normally play in front of 50 people, so to play in front of 6000 is fantastic. But I take a lot from this, they are a great bunch of girls, they really want to do well and they train hard. But back in Australia they have to get up at 5am, they’re not professional athletes, and they have to go to school or work, and they train at night. I couldn’t be more proud of my girls”