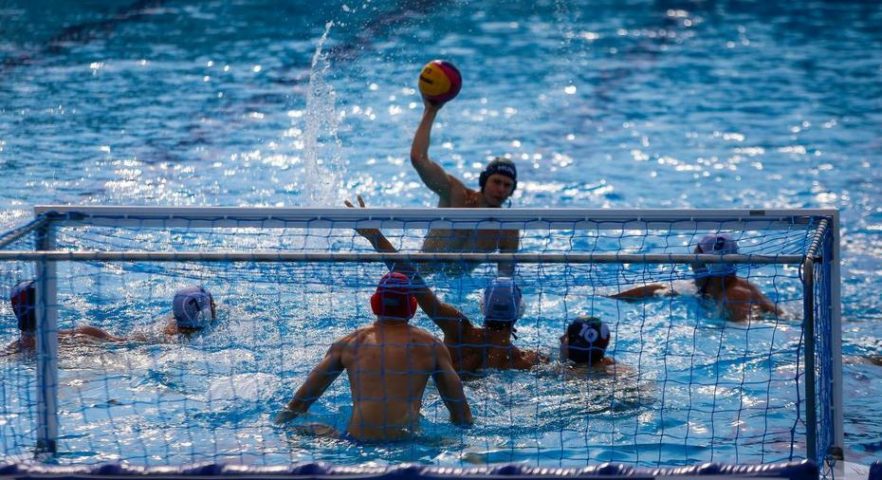 Hungary and Greece are the winners of Day 4 at the FINA World Men’s U18 Championships at the “Milan Gale Muskatirovic – 25 May” Sports Centre in Belgrade.

Both teams secured spots in the quarterfinals with today’s wins.

Hungary defeated Croatia in the derby of Group A convincingly – 9:4 to cement first place in the group and book the ticket for the quarterfinals. Kazakhstan beat Uzbekistan in the second today’s game in Group A (13:7), which means that Kazakhstan will probably finish 3rd in this group and go to the crossover round, together with Croatia.

Greece demolished Australia 19:8 in a match where the difference in goals was similar to a difference in exclusion (but in an opposite way). The Greeks qualified for the quarterfinals as the winners of Group B. The other match in this group was a one-sided contest, too. The Netherlands beat Brazil 15:5.

The Dutch and the Australians will battle for 2nd place in the group tomorrow.

The teams in groups C and D didn’t play today.

Many expected an exciting battle in the derby of Group A, Hungary-Croatia. However, the Hungarians recorded a pretty comfortable victory.

The Hungarians dictated the pace from the beginning. Goalkeeper Viktor Gyapjas commanded defense excellently (he posted 12 saves and was voted the MVP of the match).

In the opening minutes, both sides missed several nice chances. Still, Hungary took a 2:0 lead. The Croats broke the deadlock in the 8th minute, but in the next possession, the Hungarians forced a penalty shot, which Akos Nagy converted to a 3:1 lead.

Hungary jumped to a 6:2 advantage in the second period. Robert Stojanac scored from a 6 on 5 with 46 seconds remaining on the clock to give the Croats hope before the second half.

Interestingly, Croatia committed only one personal foul in the first half (the penalty late into the 1st quarter). The Hungarians didn’t have a single man-up attack in the first two periods but scored six goals. Croatia’s conversion of the extra player shots in the first half was 3/4

Akos Nagy opened the third period with an action goal for 7:3. In the 19th minute, Hungary earned its first man-up. Peter Szalai found the net from a 6 on 5, Hungary went to 8:3, and there was no way back for Croatia. The Hungarians controlled the game and maintained a five-goal difference.

At the end of the match, Hungary’s extra player shots conversion was 1/4, and Croatia’s 4/9. 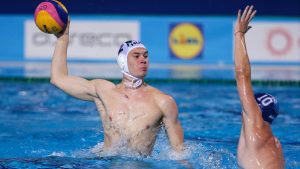 Hungary’s head coach Robert Kovacs-Csatlos said that, despite the five-goal difference, it hadn’t been easy to beat Croatia.

“This was a tough game from the beginning. But, we were building an advantage step by step. We won because of our good defense. We blocked a lot of shots, and our goalkeeper played very well. We played like a team, and that was the key to success. We will probably meet Serbia or Italy in the quarterfinals. We will prepare as best as possible for that game, and we will try to do our best. Of course, we would like to win each game at the Championships.”

“Hungary is a better team than us at this moment. Due to several reasons, this generation of Croatian water polo couldn’t prepare better for the Championships. On the other side, the Hungarian team is well prepared and better than us. Our rival proved that in the water. We do our best and try to make progress from game to game. 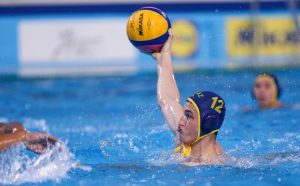 The neighbors Uzbekistan and Kazakhstan battled for 3rd place in the group and a spot in the crossover round. Both teams had ups and downs, the game was open until the final quarter, but Uzbekistan ran out of energy at the finish. After a 1:1 first quarter, Kazakstan built a 6:2 lead (14th minute). Still, Uzbekistan managed to come back into the game. Early in the third period, Uzbekistan cut the deficit to one (5:6). The teams exchanged goals until 7:8 (23rd minute). After that, Kazakhstan kept Uzbekistan goalless until the final buzzer, while it scored five goals for a 12:7 victory. Alexandr Yeremin, was instrumental in the Kazakhs’ success, scoring three goals in the last nine minutes.

Greece ran over Australia in a match in which exclusions and conversion of the man-ups made the difference.
Austraia managed to level only at 1:1 at the beginning, but Greece had a 4-goal lead at the first break (6:2). Five of the Greeks’ first six goals were with a power-play advantage. Australia cut the deficit in the middle of the second quarter (4:7), but the Greeks produced a 3:0 run by the middle break (two goals with an extra player and an action goal) for 10:4. The Greeks continued to dominate and entered the final period with a 15:5 advantage and stretched the margin to 11 until the end. 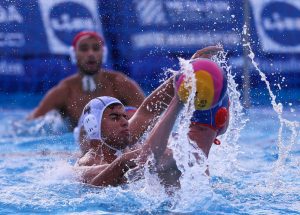 The players of Greece committed five personal fouls, while the Australians were excluded 21 times! Four “Sharks” were out before the end of the game because of three personal fouls. Greece had an excellent percentage of extra player shots. It scored 13 goals with a power play advantage (13/18) and one from a penalty (1/3). Australia’s man-up conversion was 2/5.

Brazil had some good moments in Belgrade, but it couldn’t keep up with the Dutch this evening. The Netherlands earned a 3:0 lead in the first five minutes, and that series set the tone of the match. Brazil couldn’t come back to the match. The South Americans narrowed the margin (1:3 and 2:4). However, the Dutch produced another 3:0 run in the third quarter. They added three unanswered goals in the first four minutes of the third period and, after six consecutive goals in total, went to 10:2 and secured a convincing win. 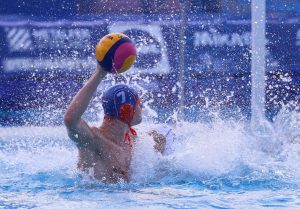 Lars Josh Ten Broek (NED), scored six goals and was the MVP of the match

After three rounds, the Netherlands has six points and will play against Australia tomorrow in a decisive match for 2nd place in the group. If the match ends in a draw, the Netherlands will finish 2nd because of the results against 1st-placed Greece (the Netherlands suffered a narrow 11:12 loss to the Greeks).

Brazil finished the group stage and will continue its campaign in the classification matches.