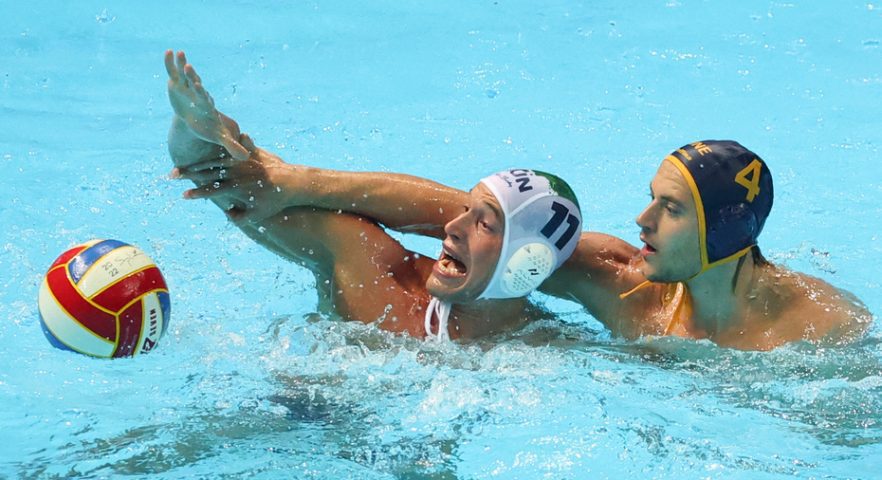 Hungary and Italy celebrated wins in the first half of the quarterfinal program at the 35th Men’s European Championships in Split.

Hungary, the reigning champion, had a strong opponent in Montenegro. Italy faced France, which started well, but the French lost control, letting Italy produce a 7:0 run. The “Settebello” were trailing 3:5, before they scored seven goals in a row to earn a solid 10:5 advantage in the third quarter.

Hungary will play against Spain or Greece in the semis, while Italy will meet Croatia or Georgia.

The first quarter belonged to the Hungarians. Still, they needed a lot of time to break Montenegro’s resistance. The 2008 European champion halved the distance in the second period (2:3, 3:4, 4:5). In the 23rd minute, the Montenegrins narrowed the gap for the last time. Kanstantin Averka converted a 6 on 5 to make 5:6. In the next minute, both teams missed their chances. After Djurdjic missed 21 seconds before the last break, the Hungarians started a counterattack, which was finished by captain Szilard Jansik – 7:5. That was maybe a turning point. 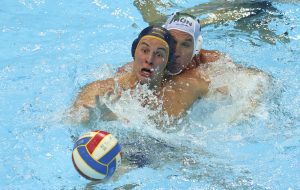 Miroslav Perkovic and Danial Angyal All photos by Total Waterpolo

Hungary kept the momentum gained at the finish of the third, and opened the fourth period with two quick goals in a span of 40 seconds and doubled an advantage to four (9:5). A new wind in the Hungarians’ back came in the 27th minute, Hungary’s goalkeeper Soma Vogel saved a shot from Averka. Despite that missed chance, the Montenegrins were able to come back once more. They netted two quick goals and reduced the gap to two (7:9) with three minutes and 38 seconds left on the clock. But, in the next attack, Szilard Jansik added his fourth (of five goals) in today’s match. At the end of a counter attack, he found the net from a nice lob, and the reigning champions went to 10:7. In the remaining time, the Hungarians controlled the match and maintained a 3-goal margin. 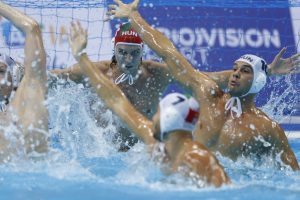 Szilard Jansik, with five goals, two steals and one block was the man of the match. However, Soma Vogel, the goalkeeper, did a great job.

Vogel told Total Waterpolo that the key to success had been Hungary’s defense:

„I think defense is always the key. Our head coach always says that defense wins the game. We entered the game fully concentrated on defense. Since defense worked well, we could make our next steps in offense. My teammates were very patient in the attack. Montenegro played a very agressive pressing, but we scored some amazing and important action goals. Besides, we added a few goals from counter-attacks. I believe that we showed that we were a fast team already in the match against Serbia and that our counter attacks are very dangerous and one of our main weapons.

„We played with heart, and that is the most important conclusion for us after the defeat in the quarterfinals. There were mistakes in our play, and there will always be, this is a young team. I think that one short period of game, when we lacked concentration, was crucial. We were chasing the Hungarians throughout three quarters and were keeping up with them. Still, we opened the fourth period very badly. We conceded two easy goals in the first minute of the fourth, letting our rival to make a 4-goal difference. Even though, we managed to come back once more, and cut the deficit to two, with three and a half minutes to go. There was still enough time. However, then came another easy goal from the Hungarians, from a counterattack and everything was decided.

France, which secured a spot among the best eight teams in Europe for the first time since 1958, wanted to go at least one step further.

It seemed that they were able to surprise Italy. Still, the Italians killed all the Franch’s hopes in the third period.

The previous encounter between these two teams was pretty close. Italy beat France by a minimal margin (9:8) at the World League Super Final.

Since the 11th minute, Italy’s coach Alessandro Campagna had only 11 available players. The Italians entered the match with 12 players due to Vincenzo Renzuto Iodice’s suspension for brutality in the match against Montenegro. In the 11th minute, Lorenzo Bruni was red-carded (the score was 3:3 at that time).

But, France didn’t benefit from Italy’s problems. After Bruni’s exclusion, the French scored two consecutive goals with a power play advantage and went to 5:3 (12th minute). However, France didn’t go further. On the contrary, Italy started coming back, and it did it very successfully. It didn’t take a while before the game turned into a one-sided contest. The „Settebello“ scored three goals in the last three minutes of the first half. Di Somma converted a man-up for 4:5. Francesco Di Fulvio leveled with a long-distance shot. Cannella closed the first half with a new power-play goal to give the Italians a 6:5 lead. 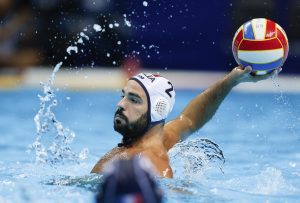 Francesco Di Fulvio (ITA) was the leader of the Italian team today, with four goals and two assists

The World League winners continued their road towards the semifinals with an amazing third quarter. They netted three quick goals at the beginning of the third quarter and jumped to 10:5. The French didn’t manage to recover from a 0:7 shock. France was couldn’t score for 09:58 minutes. Thomas Vernoux found the net from a 6 on 5 and broke the French’s silence. However, Di Fulvio made it 11:6 before the last break, and the Italians didn’t let France come back.

France played well, especially in the first half, they were very aggressive and fast. At the end of the second quarter, we changed the strategy in our defense and that changed the course of the game. My players were very clever, they didn’t lose confidence in any moment.

„We knew what to expect of the game against Italy. We started very well both in defense and in attack. But, we started missing at the end of the first half. And when you miss a lot against Italy, you let them many counterattacks. So, it was hard to defend against that. Still, we can be proud of ourselves and be happy with what we have done at this tournament so far. But, the competition isn’t over yet.