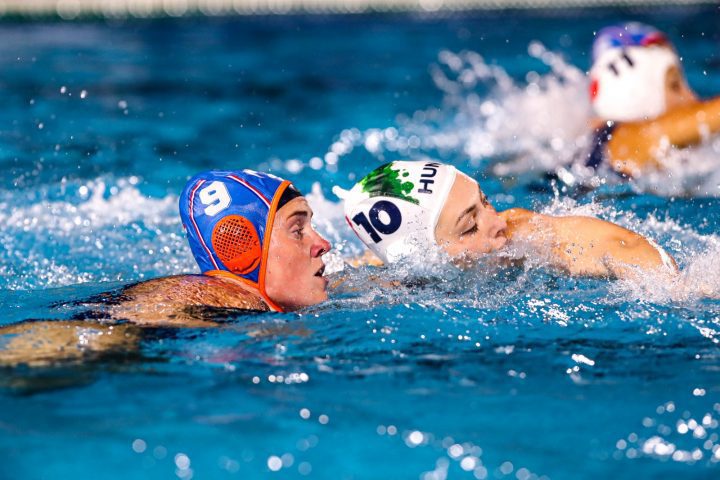 Hungary have progressed to their first World Championships final since they won the competition in 2005 with a 13-12 victory over the Netherlands.

It is often a cliché in sport, but there was genuinely very little to separate these two teams this evening. The atmosphere was incredible, with a hugely vocal Hungarian crowd getting behind their team. This may have given the hosts the lift they needed.

But perhaps the experience of the Dutch side was their undoing. For all their quality, and class, they are still a new group of players with huge ambition, but still much to experience on the world stage. For the Hungarians, progressing to a final is the step they have been hoping for in the last few years.

Dora Leimeter showed why she is trusted so much by Attila Biro, netting four crucial goals in the match. On the other side, the Dutch left-hander, Simone Van de Kraats put in an amazing shift for her side, scoring five time.

Hungary will now face the United States in the final on Saturday evening.

There wasn’t much to separate the two sides after eight minutes, although the Dutch took a one goal advantage into the second quarter. Iris Wolves did well on the post to open the scoresheet,  but Rita Keszthelyi’s deflected shot sent Laura Aarts the wrong way as the ball was diverted past the experienced Dutch keeper.

Bente Rogge found Viviane Sevenich on the post, who still had a lot to do, but converted well, and while Dora Leimeter made it 2-2 with a quick and clever assist from Dora Leimeter, a bounced shot on 5m from CN Terrassa’s Nina Ten Broek gave the Oranges a 3-2 lead after Q1.

The Hungarians turned the game on its head almost immediately, thanks to a pinpoint shot from Greta Gurisatti on the left, before a lot of hard work paid off for Rita Keszthelyi, who found the back of Laura Aarts net after a big tussle with Viviane Sevenich.

But the world class Simone Van de Kraats found her form, and converted a beautiful cross-cage shot off a Gurisatti exclusion.

There was an element of fortune for the hosts when they equalized with three minutes left to go in the half. Kamilla Farago took the shot that hit the bar, but Zsuzsanna Mate was Johnny on the spot to tuck home the rebound.

Van de Kraats was really in the mood, and her second of the game levelled the score up at 5-5.

While Olympiacos’s Brigitte Sleeking gave her side the lead just before the break, as Alda Magyari couldn’t prevent her driven low-side shot dribbling over the line, the score was 6-6 all at the break courtesy of a Greta Gurisatti action shot from centre.

Vanda Valyi has won almost every swim off at these games for Hungary, but this time into the third quarter, she showed her shooting prowess, putting the Magyars 7-6 up. On the right, Valyi found the top left of Aart’s cage, to send the Hajos crowd into pandemonium. 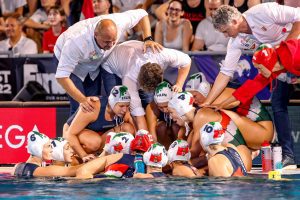 And then we saw a team take a two goal lead, and a goal of supreme calibre from Krisztina Garda – who fired the ball hard against the cross-bar before it dropped in.

There was then a flurry of goals in the match. Garda grabbed a second for the Hungarians before Dora Leimeter added to the tally. Bente Rogge netted twice, and Nina Ten Broek scored at the back post to ensure that the Oranges only trailed by a single score.

With three minutes to play, Dora Leimeter found her confidence taking Attila Biro’s side to 11 scores. It should have been a dozen for the Hungarians, as you would have put any money on Rita Keszthelyi to net 1 on 1 with Aarts. But to the Dutch keeper’s credit, she stayed big, and made a significant save.

A raucous Hajos were pushing their team every way ton the victory, but the elite Van de Kraats silenced 7,000 Hungarians with a beautifully weighted lob.

Into the last eight minute period, both sides netted early on. Rebecca Parkes, who had been up to that point quiet this evening, scored an incredibly important goal for her side from centre, but Simone Van de Kraats once more showed why she is considered to be the best left-hander in the world, and made it 12-11 with a driven shot to the far left-side of the goal.

Sabrina Van der Sloot then made an amazing goal-line block, to keep her side within a single goal, and it was just as well, because Van de Kraats equalized, after a VAR review, with her fifth goal to make it 12-12.

It was clearly the battle of the left-handers, as Dora Leimeter then put Hungary back in the lead with a goal from the right. With three and half minutes to go, Hungary led 13-12.

To every block, to every save, to every missed shot, the Hajos crowed were deafening, and they were none more so animated than when Lola Moolhuijzen missed from close range with little over a minute to go.

With forty seconds to go, Eva Doudesis threw everything at it, sending the keeper Laura Aarts up for the attack, but eventually Brigitte Sleeking’s shot was not enough, and the Alfred Hajos broke into huge noise that their side would contest a World Championship final.

Sabrina Van der Sloot (Netherlands) – “I think the difference was experience. They had the same team as the Olympics that won the Bronze medal. We have a lot of young, new players, and a new coach. So we have to get used to each other. It is always amazing to place here though, it is how water polo is supposed to be played.”

Eva Doudesis (Netherlands) – “I cannot be more proud for the way we prepared for the game, and the way that we played the game. At this level, the differences are very small.”

Rita Keszthelyi (Hungary) – “I am very happy, but exhausted. It doesnt feel like we are in the final, it still feels like we have another game to win, so we need to concentrate on the next step. I am glad we finally we could win a semi-final, and that we could use the last five years of experience to win a semi-final. One score was the difference.”