Hungary have won their first Olympic medal after narrowly beating ROC by 11-9 in yet another closely fought contest between these two sides.

Taking revenge for the bronze medal match five years ago in Rio in which they lost to the Russians, Atilla Biro’s side have finally secured a medal after three consecutive fourth-place finishes at the Olympic games. It is a huge weight of the shoulders of the players of one of the greatest water polo nations on earth.

Hungary played some great water polo throughout this tournament, including a historic victory over the USA. However, they were not at their best today. The same could also be said for the Russians, who were converting most of their chances, but not creating enough.

But Hungary will not care, as they will be on the podium later on alongside Spain and the USA. For the ROC, it’s back to the drawing board, as their team is likely to change significantly as many of their players may think about retiring before Paris 2024, but we will have to wait and see.

The scores were level after the first quarter. Natasa Rybanska took the led for the Hungarians within a minute, however, the ROC came from behind to lead 2-1 with goals from Nadezhda Glyzina and Elvina Karimova. But Rita Keszthelyi equalized from an outstanding 6m shot.

The game really got going into the second period as we saw a flurry of goals. Vanda Valyi netted twice from two extra-player situations on either side of the pool, with additional scores by Krisztina Garda, Gabriella Szucs and a second goal for Keszthelyi.

But the ROC were keen to keep pace to defend their bronze medal from 2016 and kept themselves in the game with two goals from Anastasia Simanovich from the pit and another conversion from Glyzina situated on the right-hand side. With the scores at 7-5 at half-time, the game was still anyone’s. 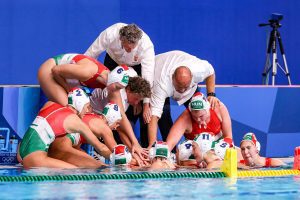 The ROC were back within one at after the turn of the half – with Ekaterina Prokofyeva converting from a 5m penalty to make it 7-6. Anna Karnaukh made an outstanding double save from close range to ensure the Hungarians couldn’t pull away, and the ROC were level from a beautiful lob that floated into the bottom right-hand corner to make it 7-7.

With the momentum now on the side of the Russians, they capitalized through Alena Serzhanotva’s excellently placed extra-player shot from Gabi Szucs exclusion on the perimeter. Anna Timofeeva had two chances to score that were blocked for the ROC, whilst Dora Leimeter missed twice to give the ROC a narrow lead into the final quarter.

Hungary were back into the game via Vanda Valyi’s third goal of the game. Valyi’s cross-cage shot on the right levelled the scores up for Hungary before her side then took the lead through Greta Gurisatti’s rifled shot into the top right-hand corner of Anna Karnaukh’s goal to make it 9-8. 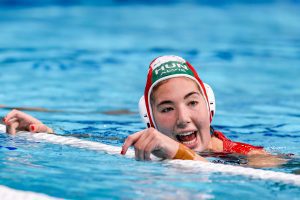 With ROC now on the back foot, it was important that Anna Timofeeva put away her first of the game with a silky finish on the post. However, with less than three and half minutes to go, Anna Illes restored Hungary’s lead with a thundering effort off the right-hand post and in.

Alda Magyari then became the hero, first making the save from Nadezhda Glyzina, before launching the ball 25m into an empty net that Anna Karnaukh had vacated in the last attack.