According to the bookmakers’ predictions before the Olympics, Hungary was the biggest favorite for the title at the men’s tournament.

The European champions failed to make the finals. Still, they reached the podium.

This is the 16h Olympic medal for Hungary (9 titles, 3 silver, and 4 bronze medals), and the first one after gold won at the 2008 Beijing Olympics.

Spain has played in the semifinals six times, but it has won just two medals (gold in 1996 and silver in 1992).

The game was a defensive battle. The final score doesn’t mirror the situation in the water because Hungary secured a four-goal win in the last few minutes.

Hungary’s defense and goalkeeper Nagy were outstanding after the middle break. They didn’t let a single goal in the second half.

From the opening whistle, it was clear that the bronze-medal match will be a balanced battle.

In the first half, the teams were in a neck-and-neck race. The difference between the teams was never bigger than a goal in the first two periods of the match.

In the 1st minute, Munarriz gave the Spaniards an opening 1:0 lead, but Manhercz equalized in Hungary’s next possession. In the 6th minute, Hungary went in front after Zalanki converted a man-up (2:1), but Perrone found the net for 2:2 less than 30 seconds after. Tahull gave Spain a 3:2 lead. Harai responded with a goal for 3:3.

Hungary took a one-goal lead twice during the second quarter (4:3 and 5:4), but the Spaniards equalized on both occasions. Munarriz scored with an extra man 67 before the middle break for 5:5. Few could predict that it would be Spain’s last goal at the 2020 Olympic Games. 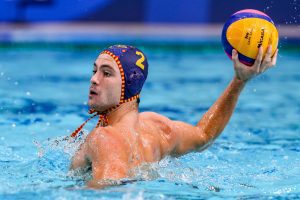 The Hungarians tightened their defense after a big break. Goalkeeper Viktor Nagy did a great job in the crucial moments, like in the quarterfinals against Croatia.

In the 18th minute, Marton Vamos converted a man-up for 6:5. After that, Spaniards wasted a few chances with a power-play advantage. Hungary’s defense was up to the task, and Nagy posted some nice saves.

But, Spain’s defense, commanded by Lopez, made no mistake, too. So, there were no goals in the remaining six minutes of the third period.

The VAR system was used in this game, just like in many others. In the 22nd minute, Danial Angyal hit the post, but referees asked for a VAR review to see if the ball crossed the goal line after it dropped to the water, and concluded that it wasn’t a goal. 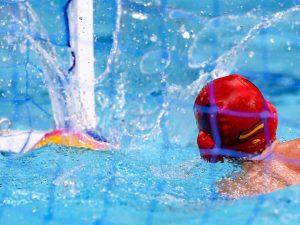 Goal or no goal: The Situation that was reviewed by the VAR system

But, there was no need for VAR in the 2nd minute of the fourth period. Hungary earned a power-play advantage. Left-handed Marton Vamos sent the ball into the net from the right, from the same place he scored the previous goal for 6:5, and Hungary built a 2-goal lead for the first time (7:5).

After that, there were a few misses and blocked shots on both ends of the pool.

Everything was decided in the 30th minute. Danial Angyal netted an action goal from the left for 8:5 and Hungary started breaking its rival.

After that goal, Spain set up a 7 on 6 action. Goalkeeper Dani Lopez joined the teammates in front of Hungary’s goal. But, Miguel de Toro made a turnover foul. Hungary had a great chance to secure a win from a counter-attack. And the European champions didn’t waste that opportunity. The counter-attack was finished by Denes Varga, who sent the ball into the empty net for 9:5 with 02:35 left on the clock.

Spain couldn’t come back, and Hungary secured the gold.

Hungary held Spain scoreless until the end although four players finished the match earlier because of three personal fouls. Zalanki, Hosnyanszky, Pasztor, and Varga were excluded one after the other between the 25th and 31st minute.

One statistical data should be added to the previous sentence – Hungary’s players committed 18, and the Spaniards 8 personal fouls. 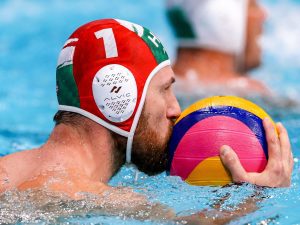 During Hungary’s celebration after winning the medal, Viktor Nagy was on the spotlight. This game was his last official match, as he retires after the Olympics. His teammates saluted him and thanked him for everything he did for the Hungarian national team, not just at the Tokyo Games. He made a significant contribution to many successes.