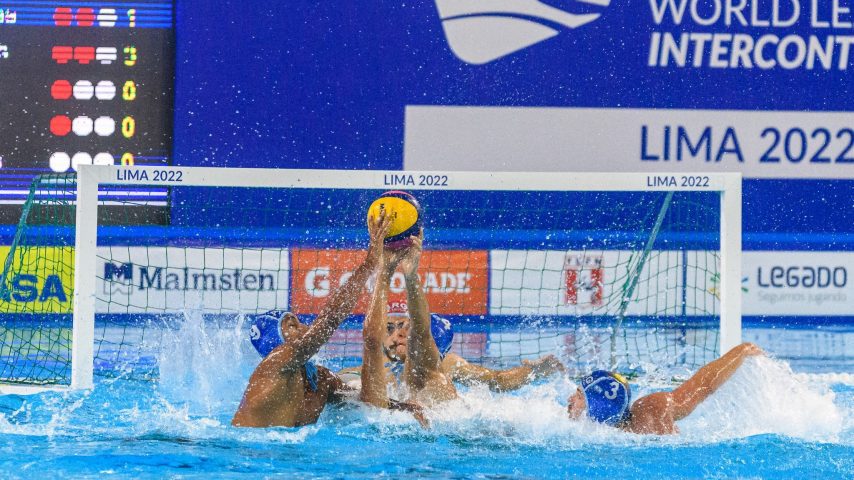 For the fourth day in a row, Canada is in the title of our article about the FINA Men’s Intercontinental Cup in Lima (Peru). But for a reason, because all of the Canadians’ matches in Lima have been epic battles. Besides, they achieved an important goal

The Canadians played another thrilling game which was decided by a single goal. On Day 4, they beat Brazil 11:10 in an exciting duel, in which Brazil came back from six goals down. To remind, on day 1, Canada lost to the USA 9:10. Afterward, it beat Australia and Argentina in penalty shootouts.

Canada secured a spot in the semifinals of the tournament, which means that the Canadians qualified both for the World League Super Final in Strasbourg and the World Championships in Budapest.

The other two matches of the fourth round offred expected outcomes. An encounter between the USA and Argentina was an even contest until the fourth quarter. Still, the Americans recorded a comfortable 13:7 victory. Australia ran over Colombia – 16:4.

Before the last day of the round-robin competition in Lima, the USA, Australia and Canada have booked their tickets for the semis.

The best four teams at the tournament in Lima will play at the World League Super Final, and two teams will qualify for the Championships in Budapest.

The USA and Australia had secured their spots at the World Championships earlier. Advancing to the semifinals, Canada qualified for the 19th World Championships. The Canadians will play at the WCH for the 17th time. They missed only the first Championships, held in Belgrade in 1973, and the previous edition in Gwangju in 2019.

Canada dominated in the first two periods, and it seemed that the match wouldn’t enter a thrilling finish. In the middle of the first quarter, only a goal separated the rivals – Canada led 3:2. Then, the North Americans kept Brazil scoreless for almost 12 minutes, while they netted five straight goals. A minute and 31 seconds before the middle break, Sean Spooner scored an action goal for 8:2. In the 16th minute, Roberto Agulha de Freitas broke Brazil’s goalless phase (3:8).

The South Americans regrouped themselves during the middle break and showed that they didn’t intend to give up. They opened the third period with a goal for 4:8. Three minutes and a half before the end of the period, Canada regained a 5-goal lead (9:4), after Maxim Shapowal found the net. Shortly after, the Brazilians’ series started. They netted three goals in a row by the last break. Gustavo Coutinho added two in the first two minutes of the fourth quarter and leveled at 9:9. Immediately after Brazil’s ninth goal, Aria Solemanipak netted for 10:9. Midway through the quarter, Pedroso equalized at 10:10.

Maxime Shapoval converted a man-up giving Canada an 11:10 advantage with 01:54 minutes to go. After that, the Brazilians couldn’t equalize once more.

Brazil still can secure a spot in the semifinals and qualify for the World Championships and the Super Final. This evening, Brazil will play against Argentina in the South American derby. The winner of the duel will go to the semis.

Argentina kept up with the USA for almost three quarters. Moreover, the South Americans took the lead twice. Still, they ran out of energy for the final quarter and didn’t make a surprise.

Team USA earned a 1-goal lead four times in the first two periods, but the Argentines equalized on each occasion. In the 15th minute, Lopez put Argentina in front for the first time (5:4). Quinn Woodhead responded immediately, so the teams were tied at 5:5 at halftime.

The Americans built a 2-goal lead (7:5) in the third quarter. Ramiro Veich found the net for 6:7 in the last minute of this period. But, after that, Team USA scored five goals in a row and earned a safe 12:6 advantage and kept 1st place.

As expected, Australia recorded an easy victory over Colombia.

The top four teams will qualify for the World League Super Final in Strasbourg. After the group stage, they will play in the semifinals.

Two teams will qualify for the World Championships in Budapest. USA and Australia have already qualified for the tournament in Budapest.