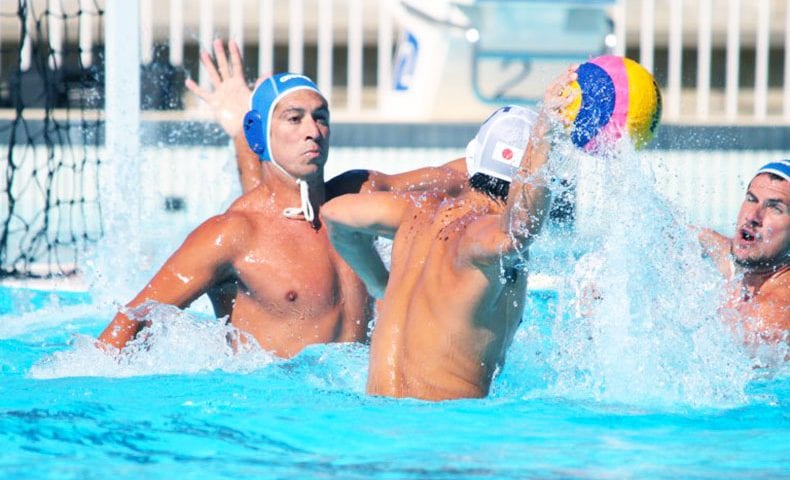 Japan started the surge with a 13-8 margin against Argentina; Canada pipped China 11-10 in a controversial finish; Kazakhstan shrugged off South Africa 14-8 and Australia downed New Zealand 15-4.

In the China-Canada clash, China shot a fraction of a second after full time had expired, but the whistle did not sound. A video review showed that Canada had indeed won the match.

China was the first across the line with a 16-5 win over Kazakhstan; Canada came back from three down to beat Japan 9-6; USA dispensed with South Africa 22-4 and host Australia finished the quartet with a 15-4 trans-Tasman victory over New Zealand.

With the main object of the competition over, now it comes down to bragging rights with some tantalizing face-offs set down for Saturday.

Japan became the first qualifier for the Super Final with an expected victory over Argentina. The result was still in doubt at halftime, but 6-4 quickly became 8-4 and Argentina was always on the back foot. Once it became a five-goal difference, Japan enjoyed the match more and experimented.

Not so Yusuke Inaba, who had a horror day for him, scoring just twice with one a penalty strike while he missed an incredible three more penalties, twice in a row in the final quarter. Much could be said for Argentine goalkeeper Diego Malnero who was exceptional against the highly charged Japanese onslaught. Strangely Japan struggled on extra with no conversions, such were the Argentine defense.

Canada survived a last-second scare and China was left bewildered as the final hooter failed to eventuate, seemingly sending the match to a penalty shootout. However, the star of the match, Nicholas Bicari, had possession for the final Canadian attack when 11-10 ahead. He surged down the right side and took the ball to the Chinese two meters at the conclusion of his possession time

The clock read 2.7s. China’s goalkeeper sent the ball up to his team-mate who fired the ball toward the Canadian goal. A defender deflected it and all seemed over. However, the clock had not moved much with officials saying it had by the final hooter failed to sound. A Chinese player picked up the ball and smashed it into the net and the goal called. However, once again, discussion with the table proved that the siren was the culprit and the goal disallowed much to the delight of the previously protesting Canadians.

China was distraught, but the right decision had been made. Canada was booked into the Belgrade Super Final while China will need to ply its trade at the FINA World Championships in South Korea. The major point about the match was that both teams squandered three-goal leads. China was 5-2 up late in the first quarter and still ahead at halftime. By the next break, Canada was 8-7 ahead and 10-7 at 6:20 of the final quarter. Three goals in 90 seconds leveled at 10-10. It was Bicari who put Canada ahead at 1:41, a lead it maintained until the disputed final whistle. If China had made better use of the extra-man count, it could have qualified.

Kazakhstan earned its spot in Belgrade with a second-half bonanza. The contest was impressive in the first half as South Africa led 2-0 and then had trouble fending off Kazakhstan who quickly turned the lead at 3-2. South Africa leveled at 3, 4 and 5 before Kazakhstan led 6-5 at halftime. This became 8-5 and 10-6 by the final break.

The final quarter maintained momentum from both sides, but by then it was all about the margin. Lwazi Madi was a delight to watch in the South African goal, claiming two penalty saves and watching as a third sailed left of the cage. Alexey Shmider missed the first attempt but finished with two goals and player of the match. Mikhail Ruday and Ravil Manafov, two veterans of the national team, claimed three goals apiece.

China had to work for goals and was thwarted on many occasion, such was the pressure from the Kazakhs. Darya Roga and Anna Novikova scored consecutive goals in the final period and goalkeeper Alexandra Zhazkimbaeva slammed down a penalty attempt by China at 0:23, leading to a counter-attack goal to Darya Muzareva. Yineng Shen was named the player of the match with her star form in goal. Guannan Niu, one of China’s leading players in recent years, came good with a hat-trick of goals.

Canada came back from 3-0 down in the opening quarter to win the rest of the match 9-3. Japan started in usual fashion before Canadian head coach Pavlidis Theocharis called a timeout and changed his defense, which had immediate success, leveling the match by quarter time. Japan put away two early lobs to upset Canada and a third that had the team reeling. However, proper control, stopping the Japanese fast-attacking style and using its size proved the key to victory.

Elyse Lemay-Lavoie was named the player of the match, scoring twice in the second as Canada went 5-4 and again in the third as the margin shot to 8-4. Monica Eggens stepped up to the plate with a three-goal contribution, which could have been four if she hadn’t had her penalty shot stopped by the hard-working Rikako Miura. Yumi Arima, one of the stars in Perth, was kept in check, scoring just one goal. and that a fantastic center forward backhand in the last half-minute.

United States of America was always going to win, but it was the tenacity of the South Africans that shone through. USA was sharp, well drilled, fast and had lightning reflexes. South Africa had to counter all that and try to score goals against the best team on the planet. USA played hard, as it always does and rained goals in the South African cage. Jamie Neushul, Alys Williams, Stephanie Haralabidis, Abrielle Hill and Maggie Steffens were kept busy delivering the goods time and again. USA was relentless and showed respect to South Africa who played until the end and doubled its score with the last two goals of the match — Nicola MacLeod for her second and Amica Hallendorff —both in the final 20 seconds. It was the USA and South Africa can be pleased with its effort, especially young goalkeeper Stephanie Barry who played a full match in the cage.

Australia completed the Super Final puzzle with a flattering victory over trans-Tasman rival New Zealand. There is always intense rivalry between the two countries no matter what the sport and this was no different. The Kiwis worked hard and unruffled the Aussie Stingers in the early stages, forcing poor shooting and turning over plenty of ball. The Aussies were heavy foulers and three players did not see out the match, Olympian Keesja Gofers finishing her time in the second quarter.

By contrast, the Kiwis gave up just two exclusions, which Australia punished. With 11 fouls, Australia shut out New Zealand every time. Two penalties were given up as well, which New Zealand gladly accepted and converted. Aussie skipper Rowie Webster, one of the most experienced players in world water polo, slammed in six goals, including a hat-trick in the third period. Hometowner Zoe Arancini netted another four. The Kiwis can credit for their work ethic and the Stingers spread the game around and should be better for the outing.

Australia shook off a dogged New Zealand to advance to the Super Final in Belgrade. New Zealand can take heart that its effort stymied the Aussie Sharks for some time and it was only in the final quarter that they could express themselves. It’s that Kiwi-Aussie love-hate relationship. Australia shot to a 2-0 lead and 3-1, finishing at 3-2 by the first break

was 6-2 at halftime and10-3 by the last break before the floodgates opened in the fourth. Australia’s diligence at converting the extra-man attack continued with a stunning nine from 12 while only giving up four fouls, the opposite of the women’s encounter between the two nations. As Australia’s confidence grew, New Zealand coach Davor Carevic was becoming exasperated with the referee decisions. A lone Kiwi penalty strike in the final quarter was the bright spark.