Italian national player with nurse’s cap in battle against coronavirus 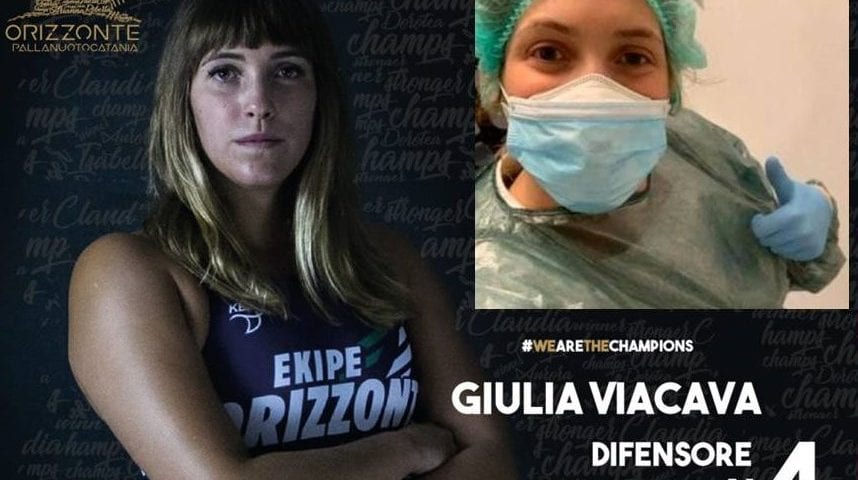 Many athletes have got involved in the battle against the coronavirus pandemic in the last few months.

The situation in Italy was very critical in March and April. Many water polo players gave their contribution to the battle against the pandemic. Still, Giulia Viacava, the member of the female Italian national team and Orizzonte Catania’s defender, has got involved in a specific way. She has removed the water polo cap, put the nurse cap, and started to work a nurse in a care home for the elderly in Genoa!

Last year, she won the LEN Super Cup with Orizzonte, based in Catania (Sicily). After the competitions were suspended, she returned home in Sori (near Genoa), where her family lives.

“I thought about my three-year degree in nursing, and I said to myself: what am I doing here? I can’t train, and I don’t want to be useless at a time like this. I have a skill, let’s use it, Giulia Viacava said in an interview for Italian Corriere Della Sera.

She has spoken about her activities in the retirement home in Genoa in several interviews in recent days.Viacava’s parents are health workers.

“I was born in Genoa, my father is a doctor, and my mother is a nurse. My parents have never forced me and always told me to follow my passion “, Viacava said a few days ago in a radio interview (FS Radio).

She has followed her passion – water polo, but the COVID-19 crisis forced her to try something different.

“I think that at the end of everything, I will bring the family’s values and of the friendships that have been closer to me in this period than water polo. One of the things that most struck me, which made me deeply tender, is that these patients cannot have relatives at their side, and some cry because they miss their loved ones.”

Giulia’s colleagues and habitants didn’t know that she is a water polo player when she came to the retirement home.

“As soon as I arrived, I hadn’t told anyone who I was. I didn’t want to be favored. Then my story came out in the mass media. I have to admit that a great understanding was born with my colleagues. I can consider them a team like the sports team I have in Catania”, Viacava underlined in an interview last week.

Her work has been very demanding. She admitted that it was hard to adapt. She worked from 7 AM to 9 PM. It has been very hard in the night shifts when she was alone with a health worker for about fifty guests.

“It helps having practiced a team sport. You have to try to do your best with the strength you have, and it also helps in the relationship with the others. In addition to physical fitness, mental fitness is important, keeping balance and serenity, keeping the brain in exercise. It may seem strange, but also the patterns of water polo are useful in this work.”

Giulia says that working in a home for the elderly was something that she had wanted.

“I like my old men. Maybe they have tantrums; they don’t want to eat or go to sleep, sometimes they are almost like children. They are the most fragile now. I see my grandparents in the people in the home for the elderly. Our grandparents have done so much, given so much, all their lives, now is the time for us to give back.”

In nurse’s role in Gwangju

Viacava found herself in a similar situation last year. At the end of the 2019 World Championships in Gwangju a structure collapsed in a nightclub and two South Koreans died, while several athletes got injured.

“I found myself in a disco where the mezzanine collapsed at my entrance. Instinctively I immediately went to help the injured people”, she discovered in the newest interview for Radio FS.

Giulia didn’t have a break during the suspension of the competitions and training, but she is ready for new challenges. The water polo clubs in Italy have been restarting their activities this week. Giulia misses the pool.

“I can’t wait to go back to see my teammates, to re-live the feelings before the games, adrenaline. These are feelings and emotions that you can only experience in the swimming pool. “, she said in one of the interviews last week.