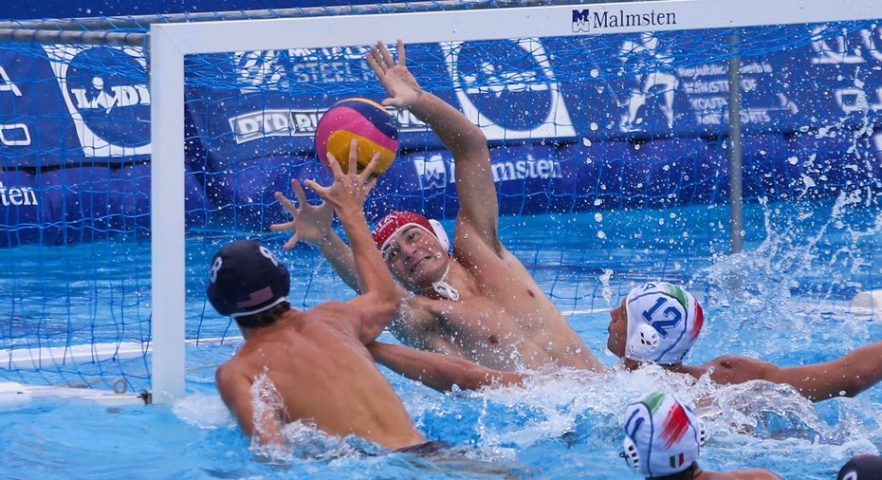 The big match of Day 3 at the World Men’s U18 Championships in Belgrade ended in a draw.

Italy and USA shared the points – 8:8 in Group C. Both teams had ups and downs in this game, and the Americans took a point thanks to a good finish.

An encounter between Australia and Turkey was interesting too. The “Sharks” were the favorites, but they secured a win only at the finish of the game (13:12).

The favorites were convincing in the other matches. 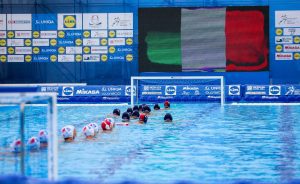 Due to cold weather, the players were in the water during the pre-match ceremonies in the morning session (ITA-USA, MNE-CAN, ESP-RSA. CRO-KUW). All photos by Slobodan Sandic/Water Polo Federation of Serbia

Before each of today’s games in Group A, only a winning margin was in question. The difference in quality between the two European favorites and the Asian teams is very big. 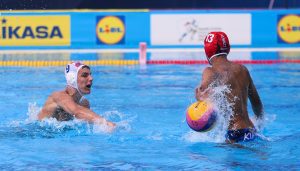 Croatia almost kept a clean sheet, but Kuwait managed to score one goal – for 1:24 in the 25th minute.
Kazakhstan is significantly better than Kuwait, but it is too weak for Hungary.

Today’s matches were warmings-up for Croatia and Hungary before the big match that will be held tomorrow. The game Hungary-Croatia, scheduled for Sunday, will determine the group winner for sure. If the match ends in a draw, the results against the 3rd-placed team will be decisive. Kazakhstan and Uzbekistan will meet tomorrow in a crucial match in a hunt for 3rd place.

On Day 1, Australia found it hard to beat Brazil (12:10). Today’s game between Australia and Turkey was similar, and the “Sharks” emerged as winners again. Turkey got off to a better start. Australia opened the second period with two goals. It went in front for the first time (4:3). The Turks leveled at 4:4 and 5:5.And then Australia straightened its defense and produced a 4:0 run. The “Aussies” jumped to 9:5 (20th minute). That was a turning point. The Turks didn’t surrender; they continued chasing the rival but didn’t equalize. 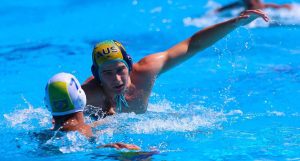 Before the final period, Turkey narrowed the margin (8:9). However, Goldschmidt and Valentine scored two power-play goals, and Australia went to 11:8. Still, everything was still open. Turkey reduced the gap to one goal (10:11, 11:12). Two minutes from the end, William Valentine (who was voted the man of the match, just like in the game against Brazil), scored an action goal for 13:11, and that proved crucial. In the remaining time, Turkey lost the ball in the attack twice. Yener scored his fourth goal, converting a man-up for 12:13, but that goal came too late – just 11 seconds before the end.

John Fox, Australia’s head coach, commented that he had expected a close contest:

“We expected a really tough and hard game. We had a four-goal lead. I think that our players relaxed a little bit after that. Turkey took their credit and kept coming to us. Well done to our rival, but to our guys who eventually recorded the victory, as well.”

“We did our best in this very important game, but Australia was better.”

The opening minutes of the game between Greece and Brazil were very interesting. Greece took a 1:0 lead after 29 seconds of play. Brazil equalized immediately. After that, defenses worked very well. Two minutes and 38 seconds before the first break, De Oliveira scored from a 6 on 5, and Brazil gained a 2:1 advantage. But, Greece killed all the suspense quickly. Greece scored four goals in the last 140 seconds of the first quarter. Early in the fourth, they added two and built a 7:2 lead. By halftime, the Greeks increased the margin to seven (12:5). At the end of the game, 12 goals separated the rivals (20:8). 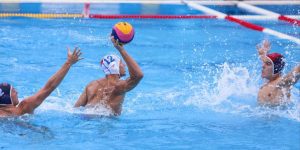 The derby encounter between Italy and Team USA played on a cold and rainy morning in Belgrade opened the third competition day.

Italy earned a 3-goal lead in the first period. The Italians scored three goals in the last 02:43 minutes of the first period and jumped from 1:1 to 4:1. But the Americans turned the table on the opponent and leveled at 4:4 before the middle break. In the third quarter, Italy retook control and built a 7:5 and 8:6 advantage. But, the Europeans couldn’t find the net in the final eight minutes.

Already at the beginning of the fourth quarter, Ben Liechty scored from a nice lob for 7:8. Shortly after , the USA had a great opportunity with a man-up. Italy’s net was empty because goalkeeper Valle was excluded. But, the Americans finished that 6 on 5 attack rashly and didn’t equalize. Still, in the middle of the quarter, Will Schneider converted a power-play advantage, and the USA caught up with the opponent (8:8).  In the remaining four and a half minutes, both teams tightened their defenses. Each side played strong pressing and didn’t let the opponent come near the goal. There were not many chances, and the result remained the same until the final buzzer – 8:8 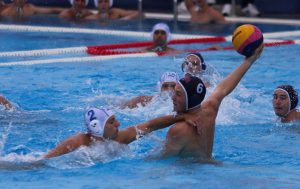 Ryder Dodd, the man of the match, said:

“It was a close and competitive game. We played really well in defense, and we worked great as a team. But, I think that our man-up conversion could have been better.”,

“I think that we didn’t give our best today. Our next opponent is Serbia. We will try to beat the hosts, but it will be a very hard match”.

.The draw isn’t a bad result for Team USA, but the Americans can’t move higher than 2nd place. They will jump into 2nd place if they beat New Zealand (which everybody expects) and Italy losses to Serbia with a nine-goal difference. (Serbia defeated USA 17:9 on Day 1).

Italy will climb to 1st place if it defeats Serbia. 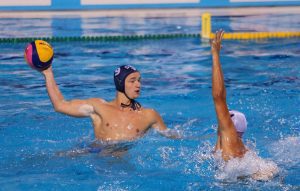 As for Serbia, the hosts had an easy task this evening. New Zealand isn’t in the same weight category as the hosts. The Serbs did care about defense in this match, despite the fact that the goal difference against New Zealand won’t be crucial for the standings. The hosts made “Kiwis”‘ attack harmless in the first two quarters. Serbia scored 12 goals in the first half, while New Zealand had only eight shots.

But, the “Kiwis” didn’t give up. In the 18th minute, they finally found the net (Keightley for 1:13) to give some joy to a group of their fans in the stands. The third quarter was quite balanced, but the Serbs re-found their rhythm from the first half and recorded a 22:5 victory.

Montenegro and Spain blew their opponents away and will battle for the top spot in the group in the last round on Monday. 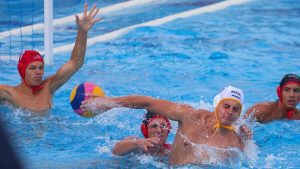 Montenegro built a significant advantage quickly (the score was 7:0 in the 9th minute) and, led by Nedjo Bastrica, -dominated until the end. The match started with a moment of silence in honor of 11 victims killed in a gun attack that happened in Montenegro (Cetinje) yesterday. 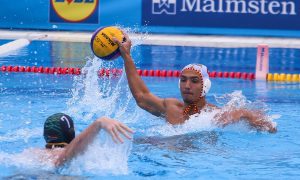 Today’s second match in Group D produced a different and unexpected storyline. Spain needed some time to take control. South Africa led 1:0, 3:2, 4:3, 5:4. Midway through the second period, the Spaniards “woke up”. Between the 11th and the 26th minute, they scored 12 unanswered goals. South Africa netted its only goal in the second half five minutes before the end (6:16). After that, Spain added eight to compensate for the missed chances in the first half.