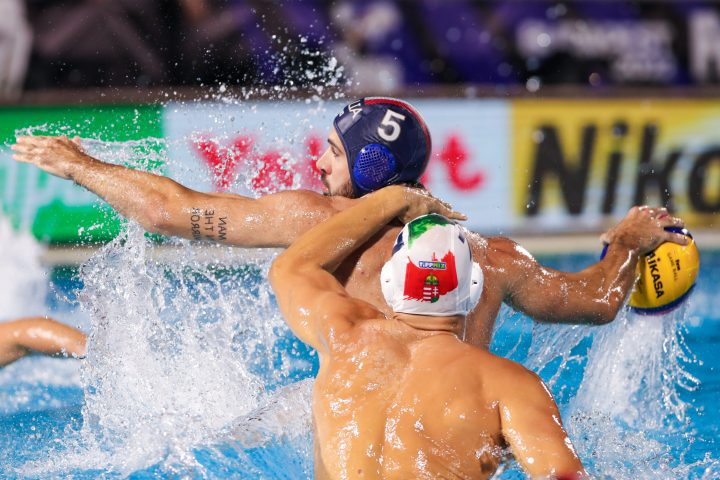 The finalists of the 2019 World Championships, Italy and Spain, emerged as winners in the evening session of the quarterfinal day of the World Men’s Championships in Budapest.

World champion Italy ended the hosts’ medal hopes. Italy defeated Hungary 11:10. For the first time in history, Hungary failed to make the semifinals at a big competition played in Budapest

A goal separated the rivals at the end of each game, but the matches had different scenarios. The encounter between Spain and Montenegro was open until the very end.

Italy had an 11:7 lead two minutes before the end. Then Hungary started coming back, scoring three quick goals, but it was too late. The hosts cut the deficit just 17 seconds before the end (10:11). The Italians’ win wasn’t in real danger.

On Friday, Spain will play against Greece in the semifinals, while Spain will face Croatia (the full schedule is at the end of the article). All medal winners from the previous World Championships advanced to the semis. Three years ago, Italy finished first, ahead of Spain,

Croatia, and Hungary. Greece finished in 7th place in Gwangju.

If we compare the Olympic Games in Tokyo – the champion Serbia and bronze-medalist Hungary are missing from the semifinals.

As for the 19th World Championships, Greece and Croatia played in Group B of the Preliminary Stage in Hungary, and the match ended in an 8:8 draw. Spain beat Italy 14:12 in the group phase.

The duel between Spain and Montenegro was an even contest. Spain, which arrived with almost the same team as at the Olympic Games, was a favorite and led from the beginning. Still, the young Montenegrins were in the match until the very end.

Spain earned a 2:0 lead quite early, but Montenegro didn’t let the rival go further. The Montenegrins leveled at 2:2 in the 10th minute after Banicevic scored from a 6 on 5. But, Granados replied 24 seconds after and put the Spaniards in front – 3:2. Mallarach made it 4:2 by converting a man-up. Matkovic responded immediately in the same manner, from a 6 on 5. 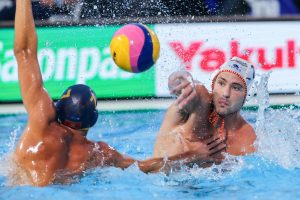 There were no goals in the third quarter for a while. Defenses were up to the task. In the 22nd minute, Sergi Cabanas broke the deadlock scoring a power-play goal for 6:3. But, Montenegro cut the deficit quickly. Bogdan Djurdjic converted a man-up in the next possession. Shortly after, he added an action goal – 5:6.

The low-scoring battle was reaching its culmination. In the middle of the fourth period, Blai Mallarach converted a man-up for 7:5. After that, Montenegro wasted a few chances but defended very well and didn’t let Spain break their resistance. A minute and 35 seconds before the buzzer, Kanstantin Averka found the net from the deep left with an extra man – 6:7. Everything was still open. 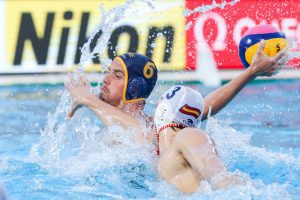 In the last 60 seconds, both teams missed their opportunities to score. Firstly, after Averka blocked Granados’s shot with a man-up, Perrone hit the crossbar from a rebound. The Montenegrins had an attack and an opportunity to secure a penalty shootout. Bogdan Djurdjic took responsibility with 22 seconds to go. Still, he hit the crossbar, as well as Perrone, and Spain kept the ball after that.

Budapest has been the host of the World Championships two times (2017 and 2022), the European Championships five times and the World League Super Final once. The home male team won a medal at each of the previous seven big tournaments in the capital of Hungary. This time, it won’t play in the semifinals.

European champion Hungary led 3:2 after the first quarter (all five goals were scored in the first four minutes). However, the Italians opened the second period excellently with a 3:0 series (Di Fulvio 2 and Di Somma), and two goals separated the rivals for the first time – 5:3 (13th minute). 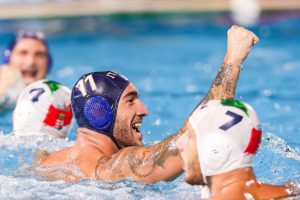 But, Hungary didn’t need a lot of time to equalize. Manhercz scored an action goal, while Zalanki converted a 6 on 5, and it stood 5:5 with 02:09 left on the clock. But, the finish of the first half belonged to the Italians. Just eight seconds before the middle break, Francesco Di Fulvio sent the ball into Hungary’s net with a nice long-distance lob. The 2019 World champions entered the second half with a 6:5 advantage.

The Italians restored a 2-goal advantage in the middle of the third period – Canella scored from a power-play advantage – 7:5. Vamos answered immediately, also, with a man-up, but Lorenzo Bruni scored a power-play goal as well and Italy had an 8:6 lead in the 21st minute. Great support from the fans in the stands of the “Alfred Hajos” pool didn’t help Hungary come back. They made a lot of opportunities, but Italy tightened its defense and didn’t let many goals. Goalkeeper Marco Del Lungo was outstanding this evening. He posted 13 saves. Del Lungo and Di Fulvio were the heroes of Italy’s win.

At the beginning of the fourth quarter, Gonzalo Echenique found the net from the right and gave Italy a 3-goal lead (9:6). In the middle of the period, Vamos converted a man-up and ended Hungary’s goalless phase that lasted eight minutes (7:9). But, Italy reacted excellently. Francesco Di Fulvio scored his fourth goal, converting a man-up from a distance. Then, Hungary wasted another man-up. Echenique made it 11:7 with 02:21 remaining on the clock, and Hungary faced mission impossible. Only a miracle could save the hosts. They fought until the end and netted three goals in 01:39 minutes, but it was too late. Jansik found the net for 10:11 with 17 seconds to go. After that, Italy held the ball and booked a semifinal ticket.

Japan was a very tough opponent to European powerhouses like Croatia and Montenegro are, but it left the pool empty-handed. Today, the Asians recorded a convincing victory over Australia, which is considered the 2nd-best non-European team in the world.

After a 2:2 first quarter, Japan scored three straight goals, and went to 5:2. From that point on, the Asians were always in front and will play in the 9th-place match.

Georgia started slowly. A few seconds before the end of the first period, the Georgians had a 2:1 lead. Six seconds from the first break, Shushiashvili scored for 3:1. Georgia added five unanswered goals in the second quarter, went to 8:1, and never looked back.

All times are CET. The current version of the schedule is updated at 23:00.

All times are CET. The current version of the schedule is updated at 23:00.