Two derbies and one surprise were the highlights of the morning/afternoon session of Day 2 of the male tournament at the 32nd Olympic Games in Tokyo.

Italy and Greece shared the points in a “crazy game “in Group A. Greece had a 4-goal lead, but the World champions saved a point (6:6). Spain beat Montenegro (8:6).

The day was closed by an encounter between Australia and Croatia. The “Aussie Sharks” controlled the match and beat the 2012 Olympic champions by three goals (11:8). Australia isn’t an underdog and it is able to play on an equal level with the Europeans. Still, this is a surprising result, which complicated the situation in Group B. As it seems now, everything will be open until the very end of the group stage. Some of the European favorites will have to fight hard to secure their spots in the quarterfinals.

After defeating European champion Hungary on Day 1, Greece was very close to a win over World Champion Italy, but the “Settebello “remained unbeaten in a low-scoring game, which saw four goals in the first and eight in the second half.
Less than a month ago, Greece defeated Italy in the bronze-medal match at the World League Super Final (10:8). But, in that game, Italy had a player fewer on the roster because Aicardi was red-carded in the semifinals.

Matteo Aicardi, Italy’s center–forward, who missed the game in Tbilisi, opened the scoring in the 2nd minute, and Mourkis equalized in the 6th. The Italians were more aggressive in offense, they had a few good chances in the final minutes of the first period, but Greece’s goalkeeper Emmanouil Zerdevas, the best player of Day 1, was flawless again.

In the middle of the 2nd period, Luongo gave Italy a 2:1 lead with a shot from the left-wing. And after that, the Greeks kept the World champions goalless for 14 minutes. Papanastasiou leveled the score at 2:2 two minutes before the middle break.

Greece dominated the third quarter. They played excellently in defense. Zerdevas posted one save after another. Konstantinos Genidounias scored 1st goal in the second half. In the 20th minute, he found the net from a direct shot after a foul for 3:2. In the next 2:10 minutes, Greece added three goals (!) and jumped to a 6:2 lead. They kept the distance until the end of the third period, and before the start of the fourth, few believed that Greece wouldn’t collect three points. 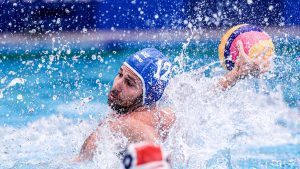 But, the Italians were able to come back. Figlioli scored from a penalty in the 26th minute to end his team’s long goalless phase (3:6). A few minutes later, he converted a man-up for 4:6. Two minutes and five seconds before the final buzzer, Aicardi managed to earn free space in the center, although he was surrounded by the Greeks, and scored for 5:6. Immediately after, Greece wasted a man up, and they paid for it. Italy earned a 6 on 5 and made no mistake. Echenique equalized (6:6) with 01:09 left on the clock. In the remaining time, both teams had chances to secure a win. Still, there were no goals. Italy had a man-up in its last possession, but Zerdevas saved a shot from Figlioli ten seconds before the end. Argyropoulos shot from a distance in the last second, but Del Lungo blocked that shot with ease. 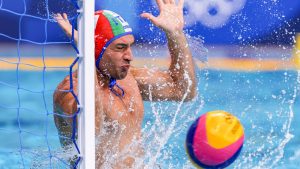 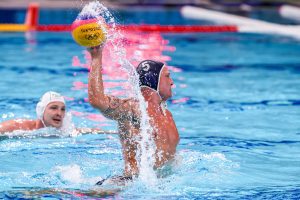 Team USA demolished South Africa, which obviously doesn’t belong to the teams which can battle at the Olympic Games. Led by Hallock, Hooper, Stevenson, the USA cruised to a 20:3 victory.

As expected, Hungary recorded the first win at the tournament, but the European champion needed a lot of time to break the persistent Japanese.

Hungary played with ten field players and two goalkeepers, but the first-pick goalie Viktor Nagy was on the bench for 32 minutes.
Japan kept up with the favorites for almost three quarters. Hungary led throughout the match, but Japan didn’t let the Europeans build a big advantage. Hungary took a one-goal lead five times in the opening ten minutes, but Japan equalized on each occasion.

The European champions, finally, earned a 2-goal lead in the 12th minute (7:5), but the Asians responded with two quick goals for 7:7. Hungary forced two penalty shots in the last two minutes of the first half. Tanamura saved a shot by Manhercz. Thirty seconds before the middle break, Marton Vamos didn’t make a mistake from the 5m line to put the Hungarians in front (8:7). However, Yoshida closed this quarter four seconds from the buzzer, so the teams were tied at 8:8 at halftime. 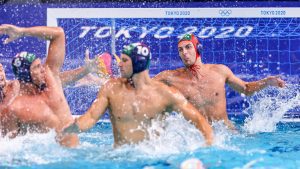 Hungary opened the third period with a 3:0 series to earn an 11:8 lead. Japan cut the deficit (10:11). Still, Hungary responded with a new 3:0 rush. Early in the fourth period, the Europeans went to 14:10 and controlled the match until the final buzzer.

The Spaniards continue proving that they are the title contenders. On Day 1, Spain beat reigning champion Serbia. Today, they downed the World League winner Montenegro.

Matkovic scored an opening goal, but Mallarach and Munarriz gave Spain a 2:1 lead. Vidovic equalized, But, 23 seconds before the first break, Granados closed the first quarter with a goal from a penalty shot for 3:2.

Matkovic leveled from the left wing (3:3), but the Spaniards answered with two consecutive goals and had a 5:3 advantage at halftime. Early in the third quarter, Bernat Sanahuja, one of the leaders of Spain’s new generation, scored from a distance (6:3), and Montenegro couldn’t come back in the remaining time. Midway through the third quarter, the World League winners reduced the gap to one (5:6), but Sanahuja added his 2nd goal in the match 11 seconds before the end of the third quarter (7:5). In the first minute of the last period, Martin Famera scored a nice goal from a power-play advantage and Spain regained a 3-goal lead (8:5). Shortly after, Aleksandar Ivovic gave Montenegro the last hope with a goal from a counterattack (6:8). But, both defenses worked well in the final six minutes, and Spain kept an 8:6 lead. 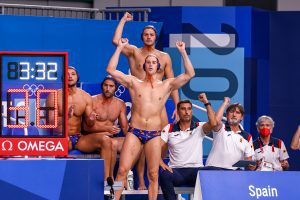 Australia already proved that it could cause headaches to favorites on Day 1 in the match against Montenegro. The “Sharks” had a 4:0 lead, but Montenegro recorded a 15:10 victory.

Today, Australia dictated the pace. Croatia was coming back from time to time, but the Australians controlled the game.

The Croats took an early 1:0 lead (Jokovic from a penalty), but Australia answered with three goals and turned around the early deficit to a 3:1 advantage. By the end of the first quarter, the Croats equalized.

After several missed or saved shots in the first five minutes of the second quarter, the finish of the first half belonged to the “Sharks”. Their defense, commanded by Anthony Hrysanthos, was superb in the middle of the game. Australia scored two goals in 43 seconds and jumped to a 5:3 lead with 01:26 remaining on the clock in the first half.

The “Aussies” kept their momentum in the third quarter. Richie Campbell, the best scorer of the game, converted a man-up for 6:3. Putt added a goal, and Australia had a huge 7:3 advantage in the 20th minute. Shortly after, the Croats started climbing back. Loren Fatovic, the son of Australia’s coach Elvis Fatovic, found the net with an extra player for 4:7. Jokovic converted a penalty after a foul committed on a younger Fatovic in the21st minute. A left-handed Jokovic closed the first period with an action goal (6:7) 39 seconds before the last break. That was Croatia’s first action goal in the game. It seemed that Croatia would avoid a surprise.
Australia found the net in the last possession in this period, but after a VAR review, the referees concluded that the shot came after the buzzer, and denied the goal. 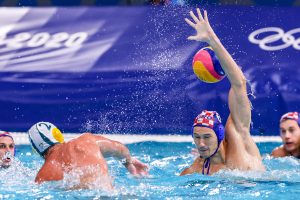 Australia opened the last period excellently – with three goals in a row (Campbell, Younger, Edwards) and regained a 4-goal advantage (10:6) in the 27th minute. Practically, that was the end of the contest. Croatia couldn’t come back and suffered an unexpected defeat. 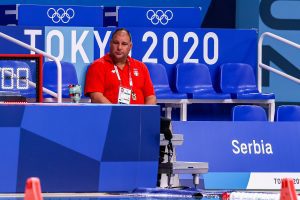 Reigning champion Serbia collected the first three points in Tokyo. Kazakhstan, with a Serbian coach Nemanja Knezevic and two Serbs on the team (Vuksanovic and Markovic), still isn’t a team that can pose a real threat to the Olympic champions. The Asians equalized just once (1:1). By the middle break, the Serbs built a 7:3 lead. They didn’t slow down until the end and stretched the margin of the win to 14.

Dusan Mandic celebrated two jubilees today. He played his 200th match for Serbia. Mandic scored two goals today and took his tally to 300 goals in the games for the national team.