Ivo Trumbić is now a Member of Merit of the KNZB 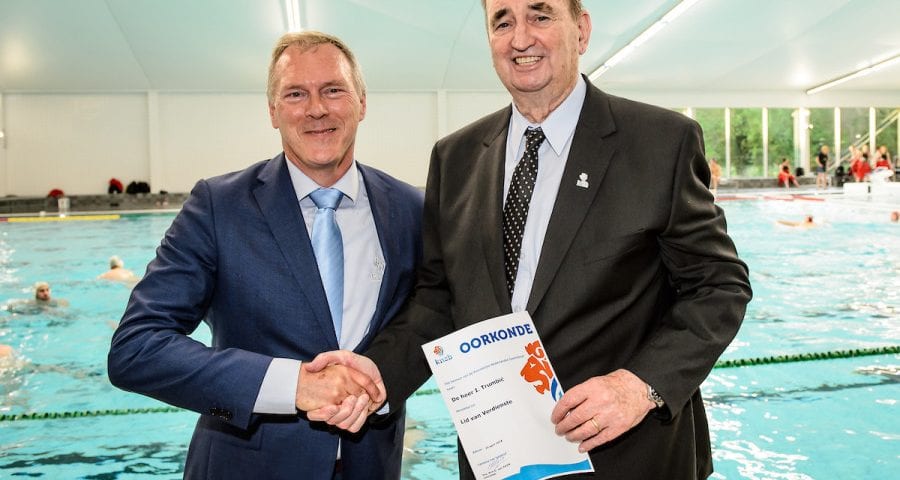 The latest news came from waterpolo.nl, announcing the honor award for Ivo Trumbić.

On Friday, Ivo Trumbić was chosen as a Member of Merit of the KNZB. After the General Members Meeting of the KNZB, chairman Marius van Zeijts gave him the corresponding award in the new swimming pool Amerena which opened earlier that day.

Ivo Trumbić has earned the honor of the KNZB for his significant work on Dutch water polo in the last century. Trumbić comes from Croatia and he worked as a coach in Dutch men’s team. Since his arrival, the team achieved a lot of progress, culminating in the bronze medal at the Olympic Games in Montreal in 1976. Four years later, the Dutch team finished sixth in Moscow.

After touring several countries as a national and club coach, Trumbić returned to Dutch soil to give the men’s team new impulses in the period 1990-1995. Under his leadership, the Netherlands qualified for the Barcelona Olympic Games in 1992. After his second period as a head coach, Trumbić remained active as a club coach and technical director of AZ & PC Amersfoort.

But the influence of Ivo Trumbić on Dutch water polo went far beyond Oranje. In the seventies, he wrote the book ‘Water polo’ to support water polo training courses. Numerous Dutch trainers, thanks to Trumbić’s work, have been able to guide their players better and improve in technical, tactical and conditional/physical areas.

Since 2015, Ivo Trumbić has been admitted to the international ‘Swimming Hall of Fame’. Trumbić, born in 1943, was not only successful as a coach in the Netherlands and other countries but also had an impressive playing career behind him. He won several national titles with Jadran Split and Mladost Zagreb and conquered the European Cup with Mladost three times. With the Yugoslav national team, he won silver at the 1964 Olympics in Tokyo and gold in 1968 in Mexico.

The fact that Trumbić is now picked out by the KNZB is partly due to the support of many former internationals, trainers and others who have worked with him. They have all spoken praise and appreciation for what he did for them personally and Dutch water polo in general.