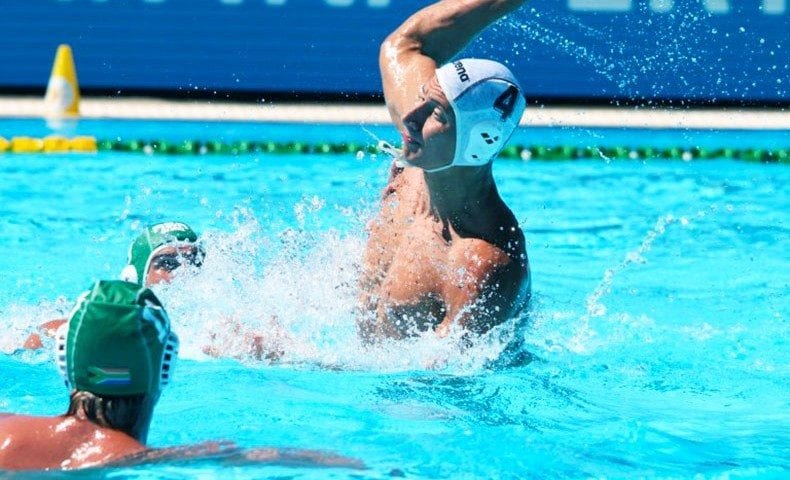 Perth, Australia, Mar 30— Japan men will play Australia and the Aussie Stingers women will clash with United States of America in the gold-medal finals at the FINA Water Polo World League Intercontinental Cup tournaments at the HBF Stadium in Perth on Sunday.

Japan reached the final first, in a high-octane, high-fouling encounter against Kazakhstan 12-7, followed by the Aussie Sharks making no mistakes like it did against Canada ion the first day, winning 14-7 with Anthony Hrysanthos blocking two penalty shots.

In the men’s round 5-8 semifinals, Argentina had the better of South Africa 12-6 and China downed a late-charging New Zealand 11-8.

Australia will play United States of America in the women’s gold-medal final after Australia beat China 12-8 and USA sent Canada to the bronze-medal play-off with a 14-7 margin.

In the women’s round 5-8 semifinals, Kazakhstan shrugged off New Zealand 14-12, thanks to the last three goals by Zamirco Myrzabekova, and Japan defeated South Africa 12-7.

Kazakhstan moved into the 5-6 playoff with a controlled final spurt that had Zamirco Myrzabekova on fire, scoring the last three crucial goals. It was always a one-goal match with New Zealand holding the lead until midway through the second quarter. then Kazakhstan took over Emmerson Houghton who scored three goals in each of the middle two quarters to have the match evenly poised at 10-10.

Myrzabekova did the work that attained the win, going ahead at 12 from center forward, scoring off the near post on extra for the first two-goal lead and putting the seal on the match with another center forward goal at 0:44 for 14-12. Two of Houghton’s goals were from the penalty line in a clash where both teams had success on the extra-man play. It was a thrilling encounter, mainly from the closeness and the determination of all players.

Counter-attack proved the winner for Japan with a three-goal burst that nullified South Africa’s excellent first-quarter effort. The South Africans shut out Japan and looked good, controlling the ball. Then, silly errors on attack were punished with withering swims upfield for three snap goals within a minute. The whole nature of the match had changed. Two South African goals redressed the balance somewhat at 5-4, but a score on extra and another counter had Japan 7-4 at halftime.

That was a 7-2 quarter for Japan. South Africa came to within two with a penalty stroke at the start of the third only for Japan to zip to 10-5. Nicola Barrett sent one in from just inside halfway to close the quarter at 10-6. It moved to 11-6 before Emma Joubert sent in a screamer from 10m for 12-7. Yumi Arima was adjudged the best in water with her three goals and continual pumping of the ball into the offensive goal. The experience of Japan was a major factor, as was the counter, although the conversion of the extra-man attack was well below par 2/15.

South Africa has a recent history of beating Argentina, but it is the latter who will play for fifth place on Sunday. South Africa should be disappointed as it trailed 5-1 at the quarter (the first four Japanese goals came from counter-attacks) and it was all uphill from there. The rest of the match was 7-5 to Argentina so the men in green had chances but failed to deliver. South Africa gave up 14 major fouls, which included two penalties, and the South Americans reveled in it, converting eight goals, six on extra at 50 percent

South Africa needs to regroup before its final match while Argentina will take heart from a much-improved effort. German Yanez was instrumental in the Argentine win, converting the two penalties in his five-goal haul. His work ethic around the pool and reading of the game is exceptional.

A 6-2 final quarter favoring New Zealand was not enough to force a shootout against China, who had controlled the match and led 9-2 at the final break. The Kiwis struggled with China’s zone defense in the first half, rarely getting a clean ball to the center forward. Without those possible ejections, chances were lean. China played smart, produced seven scorers and had Se Kai Xie and Zhongxian Chen setting the pace with three goals apiece. It seemed like when the match was over with a seven-goal margin, the Kiwis stepped up and rode roughshod over the normally speedy Japanese.

Combinations started rolling off the hand and tight shots gained results. The momentum started with the opening goal to which China responded. New Zealand netted the next two for 10-5, China went 11-5 and then the final three goals went the Kiwis’ way in two minutes with two in the final 38 seconds from Anton Sunde who had scored earlier in the period. It sets New Zealand up for the Commonwealth clash in Sunday’s seventh-place playoff while China will battle with Argentina for fifth. China settled for a 33 percent extra-man strike rate while New Zealand struggled with 1/9.

Australia crashed into the gold-medal final built heavily of a 5-1 lead late in the second quarter. China was slow to start, but when it did, it won the third period and pressured the Aussie Stingers right until the end. Australia held a six-goal lead two minutes into the third quarter. However, China scored three of the next four goals and the complexion of the match changed

Australia did not panic, stayed on track, kept working ferociously on attack and praised the decision of the coaching staff to have Gabriella Palm play in goal. The staff must have known it was going to be her day. So much so that she was named the player of the match. It had to be a hands-down decision as she made save after save and forced China into poor decisions about where to shoot. Praise also for the defense who helped channel the ball to Palm.

Australian captain Rowie Webster was in top form, with two penalty scores in her four goals with the last a disputed goal with Bronwen Knox floating the ball up pool to Webster on two meters, steering the ball back into goal, seemingly after the hooter had sounded. China protested from the side of the pool, but the match was lost and Australia had earned a spot in the final. The extra-man statistics are a revelation. Not one goal came from 15 attempts, a testament to the tight defense and spectacular goalkeeping of Palm, in particular.

In the battle of the North Americans, United States of America beat Canada 14-7 with consistency the key for the reigning World League champion USA. Canada was not to be outdone and when 6-2 down at halftime went toe to toe with the best team in the world with an 11-goal period. The pressure on USA did not continue as more goals rained in the final period, stretching the margin to seven

Most teams are improving throughout the week with probably hitting its straps more than most, setting up another great face-off with perennial gold-medal rival Australia. Goals are shared around on both sides showing depth and some would say, the USA’s depth goes down into double digits even though several newcomers have been given an outing. threaded the defense better than Canada with quick, power shooting. Canada worked hard for goals with Krystina Alogbo producing a beautiful center forward effort to open Canada’s scoring.

She made it look so easy. Kiley Neushul finished off some excellent passing, several of which were short, flip passes and she drilled in from the deep left. She was also handy with the lob. Alys Williams was deservedly named best in water with three goals — lifting her to 14 for the tournament — and collected her fluffy kangaroo and certificate from the FINA delegate. Her three goals, including the 14-7 score, showcased her rising class. In a nod to the new rules, there were few ejections and neither team scored on extra and there were no penalty shots. It was all action.

To say this was a high-octane match would be an understatement. It was probably the fastest match of the week. Both teams showed tremendous spirit, flair, and power. Never did they let up until after the final whistle. Japan held the lead at the quarter; Kazakhstan went two up in the second and then Japan asserted itself with a perfect third period, regaining the lead and stretching the margin to 9-7. It went to 12-7 with Kazakhstan failing to score in the half.

deserved better, but all credit to Japan for stopping the bigger and possibly stronger opponent. Seiya Adachi scored in each period with two penalty goals and Keigo Okawa netted the two go-ahead goals late in the third, one from the top and the other on the counter. Kazakhstan veteran Michail Ruday scored a lovely lob on the counter and a very fast goal at center forward. Yevgeniy Medvedev netted three goals, but unlike five of his team-mates who had three major fouls, he was unblemished. Only one Japanese had three majors.

Australia romped into the gold-medal final at the expense of Canada, that it only just beat (9-8) on day one. Whereas Canada went four up on Tuesday, the Aussie Sharks went 3-0 ahead tonight. This became 8-4 at halftime and 13-6 in the third period as the Sharks’ combinations and power shooting hit precision levels. Sean Spooner’s aggressive push of a Shark after Nicholas Brooks took the score to 10-4 in the third period.

The red card came out and he left the pool deck. Reuel D’Souza tried his best to keep Canada in the match, clinching his second goal on the counter two minutes from time. Anthony Hrysanthos was the undoubted star for Australia, stopping two Canadian penalty attempts and making a multitude of other saves. He makes it a specialty of blocking penalties having stopped several before today. He was named the player of the match. An unusual aside was in the second quarter where the Edwards and the Ford brothers all scored a goal apiece for the host nation.

The fact that Nicholas Bicari was restricted to two goals was a major achievement for the home side and Lachlan Edwards would be pleased with the center forward goal he scored against him. Bicari then immediately went upfield and slammed in a backhander of his own.