Jug Dubrovnik won its 16th title of the Croatian champion.

In the third game of the final series, Jug demolished Mladost 19:3 and clinched its fifth consecutive trophy for the national champion.

The result says everything about the third match. After the first two games of the final series, which offered a lot of excitement and excellent water polo battles, nobody could expect a one-sided contest in today’s encounter between the best two Croatian clubs.

However, Jug played excellently, while Mladost, the Croatian Cup winner and the Regional League winner, was far, far from its best. The Zagreb-based team, the seven-times European champion, suffered one of the hardest losses in the club’s history. The hosts dominated in all fields of the game and completely outplayed the big rival.

Jug’s captain Xavi Garcia opened the scoring in the 2nd minute. Already in the sixth minute, Jug had a 4:0 advantage.

Nothing worked well in Mladost’s performance. But, after the first quarter, the visitors still had a hope that they could turn the score.

However, after the first break, Jug killed all hopes of the visiting side. In the middle of the second period, the score was 8:0.

At 0:7, Mladost’s reserve goalkeeper Jerko Jurlina replaced Ivan Marcelic, who was outstanding in the final of the Regional League and played very well in the first two games of the final series. But, that move by Mladost coach Zoran Bajic didn’t help his team. At halftime, Jug had a 10:0 advantage.

At the beginning of the second half, Mladost had a chance to score the first goal, from the counter-attack, but goalkeeper Toni Popadic, who was on a high level again, saved the shot.

After the first half, only the margin of the hosts’ win was in question.

The home side jumped to a 14:0 lead before Mladost finally scored its first goal. Thirteen seconds before the end of the third period, the visitors earned a penalty shot. Alexander Bowen sent the ball into the net from a penalty for 1:14 and home fans saluted that goal with applause.

In the fourth period, Mladost managed to find the net two times, but by the end of the match, Jug increased the difference to 16. The hosts celebrated their 16th title with a 16-goal margin win. 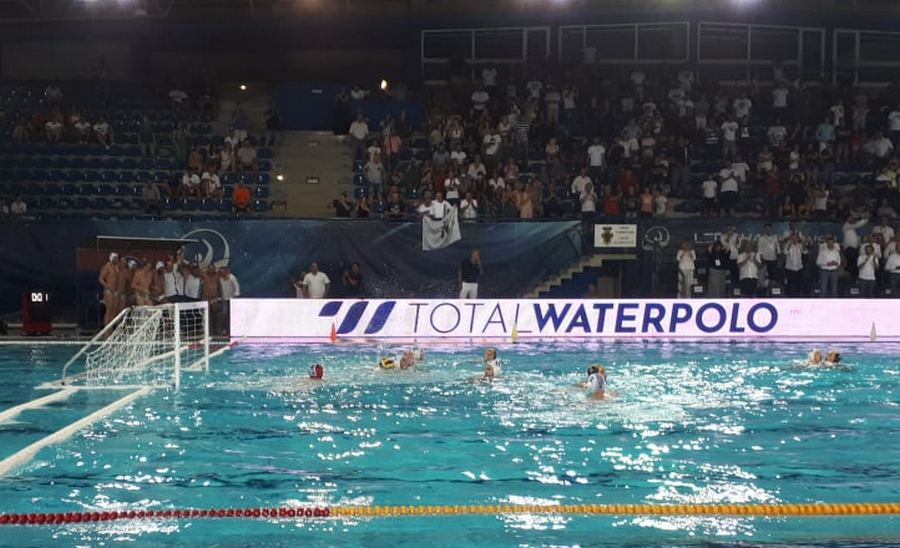 The home fans started celebration much before the end of the game Photo: Djino Filipi/Total Waterpolo

SCORES AND STATISTICS ON OUR PAGE, POWERED BY TOTAL WATERPOLO ARENA: Jug-Mladost, the  final series of the Croatian League