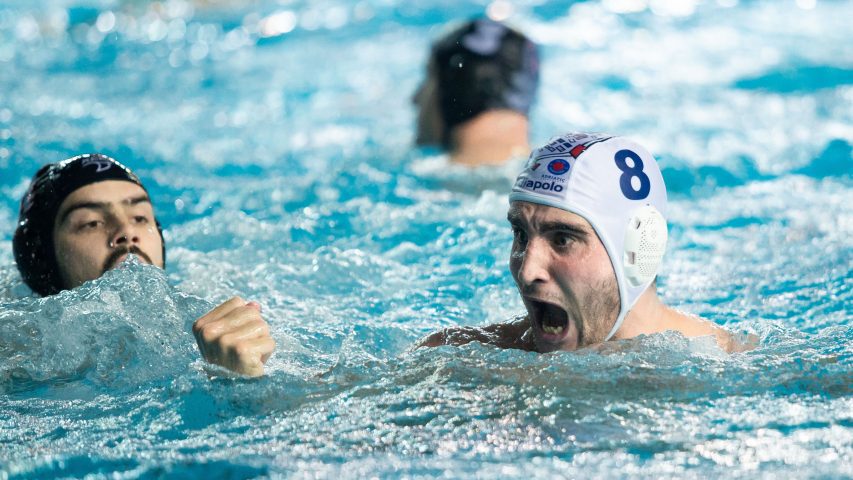 The fifth wave of the COVID-19 pandemic continues making troubles water polo clubs. Only two of four games of the 7th round Champions League in Group B have been played today.

Jug defeated Pro Recco 11:8 in the derby of the round played in Dubrovnik and halted the Italians’ long winning streak. In the previous six rounds, the reigning champion recorded six convincing wins. However, the Italians faced big problems with Covid before the match. Five players were missing today. Jug played very well, proved that it belonged to the circle of the best European clubs, and capitalized on the Recco’s handicap. The hosts deserved the win.

Waspo Hannover, which was decimated due to the Covid infections, managed to beat Steaua in Bucharest (10:9) and kept its hopes of reaching the F8 alive. A last-gasp goal decided the winner 17 seconds before the end.

The games Marseille – Crvena Zvezda and OSC Budapest – Spandau 04 have been suspended.

Crvena Zvezda didn’t arrive in Marseille. The Serbs have problems with COVID. They have only nine available players at the moment. Besides, they had travel problems, related to coronavirus protocols (the special documentation, which was asked by the French authorities, came too late) and the Serbs couldn’t arrive in Marseille in time.

Two hours before the match OSC – Spandau, the Budapest-based club announced that the game had been canceled. During the mandatory pre-match PCR testing, nine OSC players and one coach tested positive. All players and staff underwent rapid tests. In several cases, the results of these tests did not match the results of the PCR test. The OSC repeated the PCR test this morning, but the results have not arrived on time.

This afternoon, LEN announced that the officials would make a final decision regarding the suspended matches once all relevant documents had been checked.

In this evening’s press release, LEN confirmed that wins with a technical score (10:0) were awarded to Marseille and Spandau. That was more-less expected.

“Positive tests prevented OSC from fielding enough players at home against Spandau, while Crvena Zvezda could not make the trip to Marseille. According to the regulations, Spandau and Marseille took these matches with 10:0.”, LEN announced in the Press Release.

European champion Pro Recco played without Figlioli, Loncar, Bertoli, Echenique and young Marini. They are injured or have tested positive for coronavirus. Recco’s coach and former Jug’s star Sandro Sukno had 12 available players. Jug was complete. Goalkeeper Toni Popadic had been ill last week, but he recovered and returned to the team.

Jug’s Zuvela opened the scoring in the 4th minute, but Pro Recco responded with three goals and earned a 3:1 lead. The hosts leveled at 3:3 early in the second period. After that, Pro Recco went in front twice (4:3, 5:4). In the 14th minute, Jug found the net in two consecutive attacks (Benic, Fatovic) for 6:5. Shortly after, the hosts had a fine chance to double the advantage, but they failed and only a goal separated the rivals at halftime.

The hosts missed their chances at the finish of the second period, but they started breaking the rival in the third quarter. Midway through this period, Stylianos Argyropoulos scored from a counter and Jug built a 2-goal lead for the first time (7:5). Zalanki responded immediately for 6:7, but Jug took control soon. The Croats’ goalkeeper Toni Popadic posted several excellent saves, which raised his teammates’ self-confidence. By the end of this quarter, Jug produced a 3:0 run to jump to a 10:6 lead.
The Italians halved the distance after two and a half minutes of play in the fourth quarter (8:10). After Pro Recco’s eighth goal, Jug forced a man-up, but Del Lungo saved a shot from Argyropoulos. The ball went to the corner, and Jug got 20 seconds for a new attack. Argyropoulos finished the possession again. He shot from the same place from the left side. He found the net this time for 11:8.

In the remaining time, Jug played smart and managed to keep a three-goal victory. The Croats didn’t count on a win against Pro Recco, but this success compensates for losses to OSC and Marseille in Dubrovnik.

Argyropoulos and Loren Fatovic scored three goals each, but goalkeeper Popadic also deserves credits. He did a great job with 14 saves.

Six players who are very important for Hannover’s play stayed in Germany because they are infected with Omicron – Radovic, Schutze, Nagaev, Corusic, Muslim and Macan. The visitors had 12 players on the roster, but they clinched three points and remained in the race for the F8 berths. After this victory, Hannover is just two points behind 4th-placed OSC Budapest.

Hannover led for most of the time. Steaua caught up with the Germans in the 20th minute. Alexandru Gheorghe scored from a 6 on 5 and leveled at 5:5. Still, Hannover hadn’t burned all of its reserves. The Germans scored three goals in 2:40 minutes for 8:5. But, Steaua was able to come back. The hosts replied with three consecutive goals and equalized again (8:8) in the 27th minute. Immediately after, WInkelhorst gave Hannover a new one-goal lead (9:8). Both teams missed nice chances in the following few minutes. Steaua equalized for the third time in the 31st minute after Dragomirescu netted for 9:9. A big drama continued. Winkelhorst scored a winner with just 17 seconds to go. Hannover had a man-up, Winkelhorst sent the ball into the net with a tricky shot, and the Germans claimed three important points.