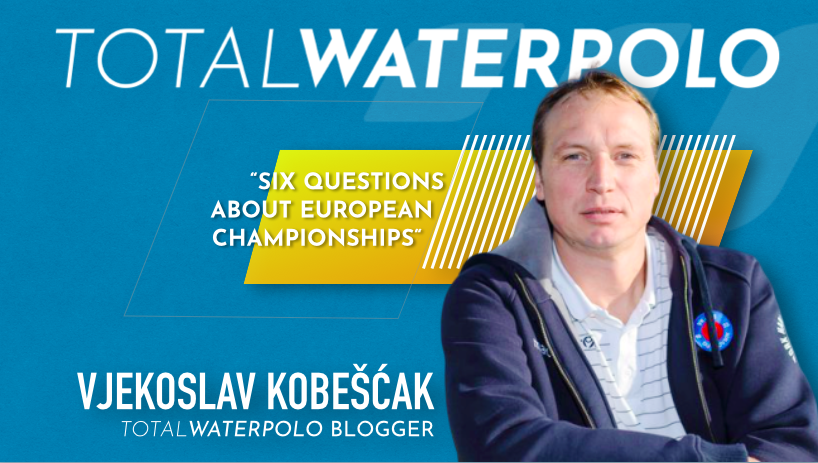 On the eve of the European Championships in Budapest, Total Waterpolo brings the series of the columns, by former water polo stars, great champions, medal winners at the major competitions.

Vjekoslav Kobescak has won the Olympic silver medal with Croatia in Atlanta 1996. In the last few years, he has been the head coach of Jug Dubrovnik. He led the Croatian club to every possible title in 2016.

The European Championship is coming near, and it will be a great one. It will be great because of playing in Budapest in the magnificent Duna Arena, and because it is expected that the stands will be packed during the competition. Also, it is assumed that TV broadcasts will be at the highest possible level, which is something our sport deserves. When the Hungarians organize major competitions such as European, World Championships or the clubs’ competitions as the Champions League final, they generally set new standards for everyone else, because of numerous reasons.

Their pools are marvelous. For example – the Margit Sziget pool is like a museum – a real historical stage. If Old Trafford is the stage of dreams in football, then Margit Sziget is the same in water polo. The Duna Arena is a swimming pool that is side by side with NBA arenas.

They set new standards due to the quality of TV broadcasts, as the director does not kill the match dynamics with unnecessary zooming beyond the situation where the action is (like what we watched at the World Championships in Gwangju where the director followed an excluded player instead of play).

The games are always playing in front of the significant number of spectators that excellently understand our sport. It’s something that only Dubrovnik can boast about…

I hope we will witness all of the above during the Championships.

I also hope that the new rules will prove whether they have “paid off” or not. If we analyze the period since they were implemented in the game, which means the World Championships in Korea, the Champions League and national championships since this season, there have been many disputable situations, most of which have taken place in penalty situations.

I would like that we do not testify to any controversial situation. And if there are such situations, I wish the judges and LEN to resolve them satisfactorily.

The teams are fighting not only for the ranking at the Championships but also for the Olympic berth.

There have been no changes in the quality of the national teams. But since the competition is held in the middle of the season, it somehow seems to me that it is harder to make predictions, which is good for the competition itself. They are still the same favorites for the medals. All favorites, excluding Montenegro, made no big changes in the lineups for the Championships, probably relying on routine and coordination. That is understandable because the tournament is in the middle of the club season, and the teams did not have much time to prepare.

It will be interesting to see the playing rhythm of all the teams, as the tournament is in the middle of the club season. I was not too fond of the playing rhythm in Korea. Maybe the reason for that was the new rules, so everyone was kind of careful. I expect faster play and more attractive matches in Budapest.

If we analyze some of the teams that are far from the European top, unfortunately, they are still not ready for big surprises. Their success against the best teams will depend more on the favorites’ performance than on their game.

My personal views, or rather said questions, though I would emphasize that I am not good in predictions, would be as follows.

Question No. 1: Can the three strongest teams win the top three positions?

For me, Serbia, Croatia, and Hungary have the highest quality – in that order. It has been proven that these teams can reach gold. But thankfully, there are no sure winners in the sport, so the outcome has yet to be seen. Of course, the performance depends on the shape of their players, but a lot of players from these teams have a good season with their clubs (Ferencvaros, Jug, Pro Recco).

Question No.2: Can Spain finally get to the gold?

Honestly, they are my favorites. I think they can reach the gold medal because Perrone is still powerful. It’s better to say that he is still the most intelligent player of today. And if their two other best players Granados and Munnariz make the step further in their play, and if goalie Lopez is in the stable form, then they can win the title.

Question No.3: Can Italy repeat the last summer and unite two golds?

It could happen if De Lungo repeats the summer. This team still has the speed and has a great and experienced coach. The question remains, how strong will the center forwards be against the strong backs?

Question No.4: Can Montenegro and Greece make up for the poor performances at the World Championships and get into the battle for medals?

Montenegro needs more contribution from the goalkeepers. In crucial matches, when they lost, they looked predictable. They have to change that. Since they have the biggest number of debutants among the strong teams, they may even succeed.

Greece needs confidence. They are of the highest quality in the center and outside positions, and if they become aware of that, they have the condition for the great results.

Question No.5: Can teams like Germany, France, or Russia play the tournament continuously, make problems for the better teams and enter among the top eight?

It’s hard to expect this, but I sincerely hope so because each of these teams has a good basis. They have young players, so their quality should not decline in the future. But if one of these teams gets into the fight for medals, it would be great refreshment for the European and world water polo.

Question No. 6: Can the underdogs disrupt plans for some of the strong teams?

Some of them might, and in my opinion, this is Georgia, first and foremost. Head coach Chomakhidze leads Georgia at the limit of their abilities, and they are the only team to enter this tournament with months of preparation.
Romania and the Netherlands might also make a headache for stronger teams, but this is not a reward for them in this group, as they should be with the teams in question no.5.

I wish all the participants good luck and a good tournament, and I want water polo to take a step forward in this championship!