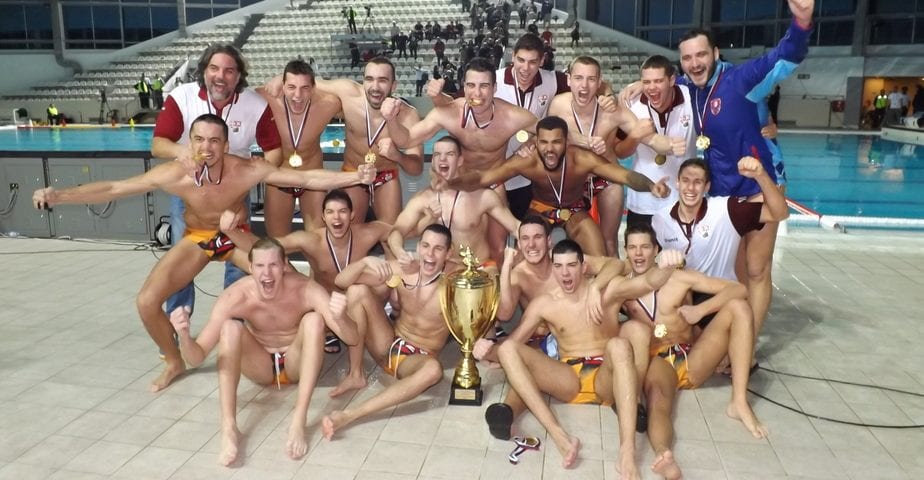 KVK Radnicki from Kragujevac won the Serbian Cup for the season 2019/20.

Today, in the final game Radnicki defeated Sabac, the winner in the previous season – 10:8.
Yesterday, in the semifinals, Radnicki edged out Crvena Zvezda 9:8, while Sabac beat Partizan 13:10.

The Final Four was played in the Sports Center “Milan Gale Muskatirovic” in Belgrade.

This is the first national Cup for KVK Radnicki. Actually, the club named Radnicki has already won the Serbian cup. From 2012 to 2016, VK (Water Polo Club) Radnicki existed in Kragujevac. That club won 2013 LEN Euro Trophy and the Serbian Cup in the season 2014/15. But, in summer 2016, VK Radnicki ceased to exist, because of the financial troubles. In the same year, a new club, named KVK (Kragujevac Water Polo Club) Radnicki was founded. In the first season, KVK Radnicki played in the lowest competition rank (Third League). Step-by-step they were growing as a club as well as a team. Three years later, KVK Radnicki clinched the first trophy in its new history.

KVK Radnicki was an underdog at the Final Four, as the Kragujevac-based club plays in the A2 Regional League, while Sabac, Crvena Zvezda and Partizan compete in the higher rank (A1 League).

But, KVK Radnicki showed something from its best at the final tournament and deserved the trophy. In today’s gold medal match, Radnicki took revenge for a defeat to Sabac in the last season’s final in Zrenjanin (9:10).

Partizan started well and earned an early 4:2 lead. Sabac, led by Dusan Vasic, retook control from the second quarter. At halftime, the rivals were tied (7:7). Quickly after the middle break, Partizan went ahead for the last time – 8:7. Sabac responded with three goals for a 10:8 advantage. Two minutes before the end Partizan levelled the score (10:10), but Sabac made a new 3:0 series for a 13:10 win.

The second semifinal match also was very exciting until the end. Crvena Zvezda led 7:4 in the middle of the third period. Five minutes before the end, Zvezda had a 2-goal advantage (8:6). Quickly after that, Radnicki scored three goals in three minutes for a 9:8 lead and celebrated the win.

The final game was played in front of the packed stands. Both teams, especially Sabac, had tremendous support. Sabac, the current Serbian champion, opened the game pretty well, with a 2:0 lead. But, Radnicki struck back powerfully, with four goals in a row and earned a 4:2 advantage in the middle of the second period. At halftime, the opponents were tied (5:5). Both teams scored a goal apiece in the third quarter and entered the final eight minutes on equal terms (6:6).

The big battle with a lot of exclusions on both sides was coming to its peak. The water “was boiling “. Djordje Vucinic opened the third period with his 5th goal in the match to give Sabac a 7:6 lead. Then Radnicki scored three goals in less than four minutes and went 9:7 up with two minutes and 44 seconds remaining on the clock. Sabac’s best scorer Dusan Vasic netted his 1st goal in the match 41 seconds from the end for 8:9. Nineteen seconds later, Danil Frolov replied in the next attack to double Radnicki’s advantage – 10:8 and everything was decided.

Uros Stevanovic, Radnicki head coach, who led VK Radnicki to the cup in the season 2014/15 said:

-There were a lot of people who thought that we were the underdogs. Among them were our rivals, too. But, we had self-confidence and we believed that we could win the trophy. The two games at the tournament in Belgrade were our best matches in this season. But, we must play better in the second half of the season. Our next objective is to retain the 1st place in the A2 Regional League and to advance to the A1 League. After that, we will continue the season in the Serbian League. We want to win the championship!

I think that our defense in the second half was crucial for the win.

Radnicki deserved the trophy. Our rival was better in the final game. We were nervous in the crucial moments, while Radnicki was calmer than us and that decided the winner.