The list of the quarterfinalists of the European Men’s U19 Championships in Podgorica is complete.

Montenegro, Italy, Greece, and Germany beat their respective rivals in the crossover round and advanced to the top eight, where they joined the group winners, which had a day off today.

The three teams from the “Big Seven” – Italy, Greece, and Montenegro recorded convincing but not easy wins, while Germany secured a spot in the quarterfinals after a big thriller.

The Germans were trailing throughout the match against the Netherlands. However, they beat the Dutch, scoring a winner in dying seconds (11:10).

Greece, Italy and Montenegro started slowly. However, all three teams found their rhythms in time and avoided thrilling finishes. Each team achieved a 5-goal victory.

For all the results and live scores visit Total Waterpolo Arena

The crossover round was opened by a very exciting encounter between the Netherlands and Germany. The Dutch were ahead for most of the match. However, Germany secured a spot in the quarterfinals thanks to a late winning goal.

The Dutch scored an opener, and Germany equalized twice in the first period (1:1 and 2:2). Early in the second quarter, the Germans caught up with the rival for the third time (3:3). After that, the Dutch netted three unanswered goals in three minutes, jumped to a 6:3 lead. It seemed that they were on the right track.The Germans reduced the gap with two quick goals (5:6). Still, at halftime, the Netherlands had a 2-goal advantage (7:5). Germany missed a few nice chances in the third period (including a penalty shot), but managed to equalize (8:8 and 9:9). 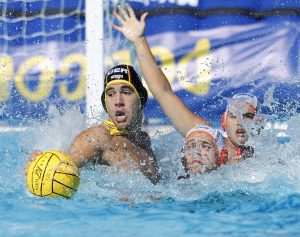 Germany wasted a man-up at the beginning of the fourth quarter. In the 28th minute, it had a chance to take the lead from a penalty shot. But, the Netherlands’ goalkeeper Berkenbosch posted another save (Rotrermund failed to score from the 5m line this time). The Germans paid for missed chances. Van der Weijden put the Dutch in front with an extra man – 10:9. However, Dyck responded immediately for 10:10.

The decision came just 42 seconds before the end. Luk Jaschke scored a nice goal from a distance. He hit the post, but the ball deflected to the net and Germany went in front for the first time in the game – 11:10. The Netherlands earned a man-up in its last attack, but Sjardijn missed the target (he hit the post) and Germany went to the quarterfinals.

Malta opened the match very well, as it did in all previous games in Podgorica. However, the Maltese couldn’t continue in the rhythm they had started. After just three minutes, Malta had a 2:0 lead (Gialanze netted both goals). But, in the following 29 minutes, they scored only one goal.

Greece needed a lot of time to find the net, but it scored three goals in the last three minutes of the first period and entered the second quarter leading 3:2. 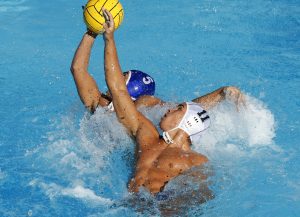 Both teams struggled in the attack in the second eight minutes. There were a lot of misses, blocks, lost balls, etc.

Malta opened the scoring in the second half. Alec converted a man-up to level at 3:3.But, after that, the Greeks’ defense was superb. Goalkeeper Nektarios Illiopoulos displayed his talent once more (he posted 13 saves). At the other end of the pool, Greece netted five goals, and, despite a bad start, recorded a quite convincing victory.

Italy didn’t let France surprise, but the “Settebello” needed a lot of time to secure a ticket for the quarterfinals. Lena gave France a 1:0 lead, but Italy built a slim 2:1 lead by the end of the first period. Midway through the second period, Nardon converted a man-up for 2:2. At the finish of the first half, Italy earned a new lead after Gullota scored from a 6 on 4 (3:2).

France ran out of gas for the second half. The Italians opened this quarter with four unanswered goals, stretched the margin to five (7:2), and there was no way back for the French. 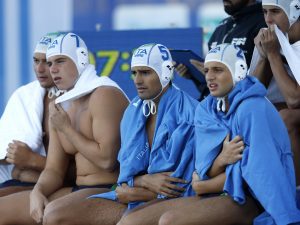 Both teams had a bad percentage of shots. France’s was 21% (5/24), while Italy scored ten goals from 36 attempts, primarily because of France’s goalie Anthony Rossi who posted 18 saves.

Italy’s leader Francesco Condemi was the best scorer with five goals, although he finished the match already in the 19th minute (the score was 5:2 at that moment) due to a protest after a personal foul.

The last match of the day was very similar to the encounters Italy-France and Greece – Malta. A team that was a favorite struggled at the beginning, but it controlled the match after a big break.
Georgia had a slim advantage twice in the first quarter (1:0, 2:1). Montenegro took the lead only in the 12th minute after Vujosevic scored for 3:2. Less than a minute after, Boskovic converted a man-up, and the hosts doubled their advantage. Twenty seconds before the middle break, Kiriakidi scored from a counter-attack to keep Georgia’s hopes alive (3:4). 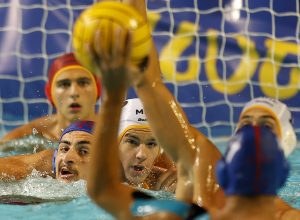 Montenegro scored the first two goals in the second half to built a 3-goal lead for the first time (6:3). The hosts had an 8:4 advantage in the 24th minute, but the Georgians didn’t surrender yet. Just 21 seconds before the end of the third, Tkeshelashvili scored from an extra for 5:8.
Nedjo Bastrica opened the final period scoring an action goal for 9:5. After that, the home team’s win wasn’t in danger.
Marko Mrsic and Nedjo Bastrica scored almost half of the goals for the home side. Both found the net three times. 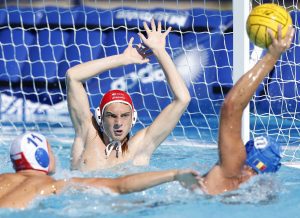 The Czech Republic kept up with Romania until 2:2. Romania produced a 7:1 series in six minutes and earned a safe 9:3 advantage by halftime.

Andrei-Radu-Ionut Neamtu was unstoppable. He netted eight goals for Romania.

In the middle of the second quarter, Turkey had a 7:3 lead against Slovakia and controlled the match until the end. The Slovaks desperately tried to come back. Four and a half minutes before the end, they reduced the gap to two goals (8:10), but Turkey regained a four-goal lead shortly after (12:8) and maintained the difference until the end. 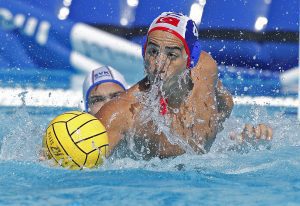 The matches for 13th place (Romania – Turkey) and 15th place (Czech Republic – Slovakia) will be played on September 24.