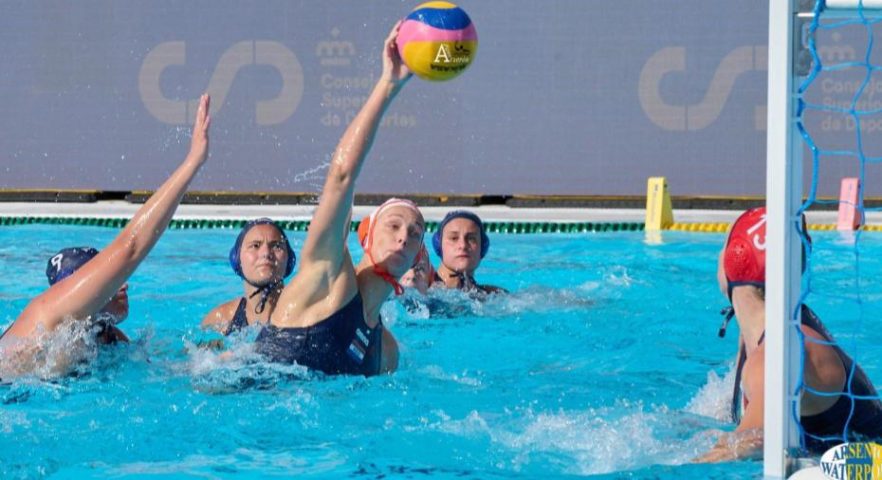 There were two games in Group A at the World League Super Finals this morning, with a blockbuster 18-17 victory for the Netherlands over Italy,  and the United States taking a straight-forward 11-5 victory over Canada.

In a goal feast in Santa Cruz de Tenerife this afternoon, the Netherlands picked Italy to a breathtaking 18-17 victory to keep the Dutch hopes of a World League medal alive. Nina Ten Broek’s goal with eleven seconds left on the clock sealed the win in a roller coaster ride of a game.

Earlier this morning, the United States guaranteed their place in the semi-finals of the World League Super Finals after an 11-5 victory over Canada. The reigning World League Champions were dominant against their North American opponents, led by the phenomenal 20-year-old Jewel Roemer, who scored four goals.

A goal from Nina Ten Broek, eleven seconds from time, sealed an incredible 18-17 victory for the Netherlands over Italy after an extraordinary match in Group A. In a 35-goal frenzy, there wasn’t much to separate the two rivals; both teams were quite simply breathtaking in attack, and a calamity in defence, leading to an incredible treat for the many young spectators in the crowd.

Once again, it appeared the Netherlands were going to self-destruct against the Setterosa, having led by four goals in the third period. But ultimately they had the attacking quality to find the extra goal.

It certainly wasn’t a defensive masterclass from either team; the game was so open at times that it was like a swimming contest. But the quality of the goals today was sublime; despite being on the losing side, every one of Claudia Marletta’s six goals were things of beauty. Simone van de Kraats, after a somewhat indifferent performance yesterday, hit some excellent goals, as did Fleurien Bosveld and Lola Moolhuijzen for the Netherlands.

The Setterosa now need to secure a victory over the United States tomorrow if they want to find themselves among the medals, while the Netherlands will finish second in the group so long as they defeat the Canadians.

There was a really vibrant and animated start to the game between two great European water polo nations. The Netherlands were the more threatening in attack, but both sides looked incredibly dangerous.

The Netherlands, and particularly Brigitte Sleeking, enjoyed a lighting-paced start, with two goals inside the opening ninety seconds; the first was a pinpoint strike from the top of the arc, while the second was to finish off a swift attacking movement off a nicely- weighted pass by Lola Moolhuijzen. 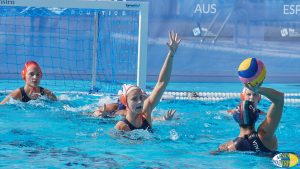 Fingers might be pointed at Sarah Buis for the blame for Dafne Bettini’s first goal of the game, but Bente Rogge restored the two-goal Dutch advantage with a shot above Caterina Banchelli’s shoulder (3-1).

The goals kept coming at a rapid pace. Simone van de Kraats and Fleurien Bosveld converted well-coordinated, extra-player moves for the Dutch, while Chiara Tabani was picked out twice on the left wing for a simple conversion; Agnese Cocchiere also found her place on the scoresheet with a nice backshot (5-4).

With a break for the players, coaches, and spectators to catch their breath, that breath was almost immediately taken away again into the second period as Fleurien Bosveld, Terrassa’s centrepiece summer signing, pounded the ball off the bar to give the Netherlands back their two-score buffer.

With some sharp attacking play for the Italians, they were back on parity with the Dutch; Claudia Marletta first netted a sublime long-range strike, catching Britt van den Dobbelsteen off guard, before Chiara Tabani finished off a threatening 6v5 move for her third of the game (7-7).

The Netherlands had a two-goal advantage going into halftime though; Van de Kraats fired a rocket into the roof of substitute keeper Aurora Condorelli’s goal before Brigitte Sleeking tapped home on the buzzer. Sleeking was then red-carded, along with Valeria Palmieri, for a brutality incident after the goal was scored.

In the second half, the game became even more chaotic, with swings in momentum for both sides. The Netherlands delivered a two-hit blow, taking their lead to 12-8 via scores from Maartje Keuning and Simone Van de Kraats. But the Italians fought on, and Tabani added her fourth of the game, Agnese Cocchiere tucked home on the post, and Roberta Bianconi converted on a swift counter-attack to pull Italy within two scores.

By the end of the third, the Oranges saw their lead cut to just a single point when Mataro’s Silvia Avegno took full advantage of a misunderstanding in the Dutch defence that left her 1 on 0 in attack (13-12). 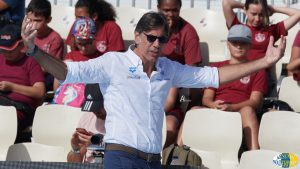 Perhaps inevitably, the Setterosa were back on level terms, and it was Claudia Marletta with another exquisite shot from deep to pull her side right back into the tie.

Lola Moolhuijzen, who had been quiet for most of the game, then scored with her signature lob over Condorelli. Both teams then saw their number twos, Iris Wolves and Chiara Tabani, score from the 2m via power plays (15-14).

Determined not to let the game slip, the Dutch appeared to have added two decisive goals going into the last ninety seconds, from Keuning and Moolhuijzen, to give the Netherlands something to hold onto in the dying embers of the match. The Italians once again showed incredible spirit to pull level inside the last thirty seconds, with two scores from Claudia Marletta: the first a penalty and the second a world-class lob from 7m.

However, there was to be late drama in the match, and despite the Italian’s best efforts to clear a shot from Lola Moolhuijzen, the resultant goal line scramble led the ball to Nina  ten Broek, who, 11 seconds from time, won the game for the Dutch. 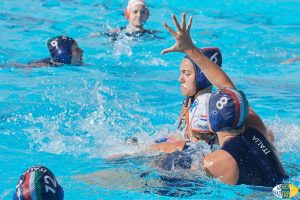 This morning, the United States defeated Canada by a score of 11-5 in a competent and trouble-free manner.

Jewel Roemer was in sparkling form, adding a quartet of classy goals to her tournament tally. The two leaders of the team, Jordan Raney and Rachel Fattal, repeated their two-goal performances from yesterday.

Adam Krikorian will be pleased with how his team handled a game they were expected to win prior to tomorrow’s match against Italy, which will be a different challenge than their previous two contests.

Canada lacked cohesion, but they had opportunities in the game. A poor second quarter put them in a compromising position against a really formidable side that they were unlikely to recover from. David Paradelo’s side can no longer make the top four, but they will hope to finish their group stage in a better way against the Dutch. 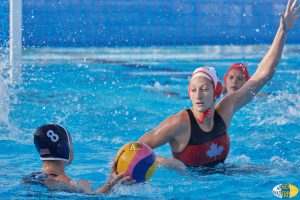 Both teams found the back of the net early on; Rachel Fattal opened the scoring for Team USA with a typically excellent bouncing shot from the right side, but Emma Wright, who last year played her water polo in America with the Cal Bears, equalised on the next attack with an improvised score from the centre. But it was two players from Stanford, Jewel Roemer in an advanced position on the left side, and a Ryann Neushul shot from range, put Adam Krikorian’s team 3-1 up going into the intermission.

The Americans netted another early goal in the second quarter off the arm of Olympiacos’ Jordan Raney, who was afforded far too much time to measure her shot. Raney added a second not long after via a double man-up, and Jewel Roemer converted an extra-player shot from a tight angle on the left to help their side run away with a 6-1 lead. 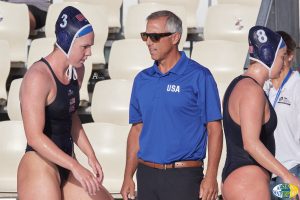 With four minutes until half-time, Axelle Crevier made her mark in this game with an elegant cross-cage strike, but it was the American’s two juniors, Emily Ausmus with a composed counter-attack finish, and Ella Woodhead with a prod home on the back post, who extended Team USA’s lead to 8-2 at half-time.

Shae La Roche and Floranne Carroll nudged Canada’s tally up to four goals in the penultimate quarter, but with Rachel Fattal’s third goal, a cheeky lob over Clara Vulpisi, and a hat-trick score by Jewel Roemer from a 5m penalty, the result was, if not already, firmly in the bag (4-10). 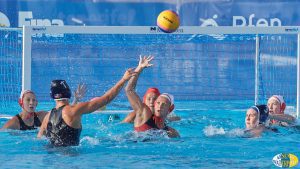 The in-form Roemer, who added two scores yesterday, added a fourth goal to the game within the first attack for the USA in the last quarter with a clever move on the extra-player move. Kyra Christmas’ goal midway through the last quarter made the score look slightly more respectable (5-11).