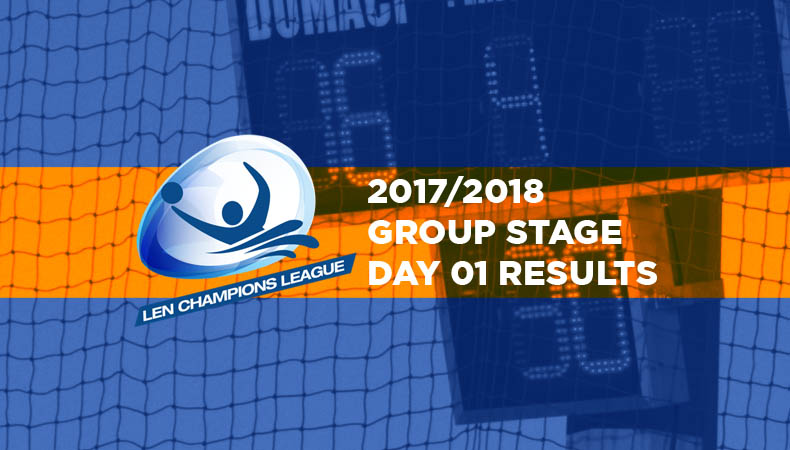 The opening of the main round couldn’t have been any more shocking as last season’s runner-up and 2016 winner Jug Dubrovnik (CRO) was beaten by newcomer Dynamo Moscow (RUS). Hannover (GER) upset last season Final Six participant Brescia (ITA), Barceloneta (ESP) drew with Olympiacos (GRE) in a thriller while the three Hungarian sides earned big-margin away wins. Recco (ITA) began its campaign with a blast against newcomer Alphen (NED).

The first match of the prelims in the season brought what could be regarded one of the biggest upsets of all as newcomer Dynamo managed to catch Jug which reached the final in the last two editions. The first half went according to the expectations, the Croats went ahead and led 4-7 before the middle break. The turning point came deep into the third period when, at 6-8, Maro Jokovic missed a penalty, then in a minute Dynamo scored and with 41 seconds to go they got even. Four seconds before the last interval Jug went ahead again and the visitors were still 9-10 up 3:57 minutes from time. But the Russians already smelled blood and in 54 seconds they netted two to take the lead for the first time. Hrvoje Benic equalized at 1:50, it was his 4th hit in the afternoon, but the hosts had the last laugh as Adel Latypov put away a 6 on 5 with 25 seconds before the end (12-11).

The other upset came in Hannover where the Germans, boosted by the performance of their Montenegrin players, stunned last season’s Final Six participant Brescia (ITA). The home team jumped to a 3-0 lead and maintained that gap until halftime (5-2). Brescia began its comeback campaign in the third and the Italians had a couple of possessions to level the score. Still, the next hit came from Hannover, Darko Brguljan converted a 6 on 5 early in the fourth and even though Brescia halved the gap twice, Brguljan netted another crucial man-up for 8-6, securing a great win for the hosts.

The big game of the day ended in a tie, just as two years ago: Barceloneta’s late surge was worth a point against 2016 runner-up Olympiacos. Until the last period the host Spaniards held a narrow lead (4-3) – then the last period produced a thriller with as many goals as had been scored in the previous three quarters. In 39 seconds Olympiacos rushed ahead (4-5), soon Barceloneta equalized but another fast double from the Greeks, this time in 66 seconds, gave the visiting side a 5-7 advantage with 2:41 to go. Felipe Perrone, returning to Barcelona after two years, buried a penalty, then Olympiacos missed a crucial man-up while the Spanish made their 6 on 5 with 57 seconds remaining. The Greek team got the last chance but missed that extra man too so they had to settle for a 7-7 draw.

The only match in Group A producing the expected storyline was the clash of Partizan (SRB) and OSC (HUN) in Belgrade. It was a chasing game after the Hungarians staged a 1-4 run in the first period. The young Serbs fought bravely and climbed back from time to time but could never go even. Though they trailed by one before the last period and were still only 7-8 down with 5:50 remaining on the clock but the Budapest based side replied in 32 seconds and in another 32 seconds they were 7-10 up which killed the contest. Partizan didn’t have the necessary power to narrow the gap, what’s more, Balazs Erdelyi’s fourth goal set the largest margin (7-11) by the end of the game.

Szolnok and Eger completed a perfect day for Hungary by pulling off easy away wins too. Title-holder Szolnok was merciless in the home of newcomer Sabadell, they stunned the Spaniards with a 0-7 rush at the beginning, deciding the match by halftime. The Serbian aces offered a fine appetizer of their skills, Milan Aleksic and Andrija Prlainovic scored 4 apiece for Szolnok which sailed away with a 5-16 win.

The other new member of the elite club, Steaua (ROU) gave some tougher time to Eger but the Magyars prevailed as they were tremendous in defense, holding the hosts to a single goal in the second half. The first period saw a missed penalty from Eger and one goal apiece. Then the visitors, 4th in last May in the Final Six, netted two connecting goals but Steaua pulled one back 27 seconds before the middle break. The third quarter was decisive as only Eger could score and went 2-5 up then added two more in the last before the Romanians were able to find the back of the net after a ‘silence’ of 12:17 minutes. This was their only hit in the second half while Eger had one more, their new Greek player Angelos Vlachopoulos set the final result (3-8).

The other two clashes witnessed one-sided matches and home triumphs. Though Spandau (GER) got a fine start in Herceg Novi (MNE) and went 2-3 ahead in eight minutes. Jadran began rolling in the second and it turned into a whitewashing in the third period. The Montenegrins staged an 8-0 rush in the middle two quarters, Spandau’s miserable scoreless period lasted for 17:47 minutes, when they netted a goal again they had already been 10-3 down and couldn’t avoid a big defeat (11-5).

Though some recalled that Recco and Alphen had met in the 1983 final of this competition and the Italians had to come up big in the return leg to clinch the trophy, 34 years on it was an absolutely different affair. The 2015 champions – bronze medallist last May – simply blew the Dutch away, in eight minutes they went 6-0 up, led by 10 at half-time. Alphen could score at 16-0, after 26:04 minutes, the rout stopped at 19-1 to highlight the difference between a top favorite and a rookie team in the main round.