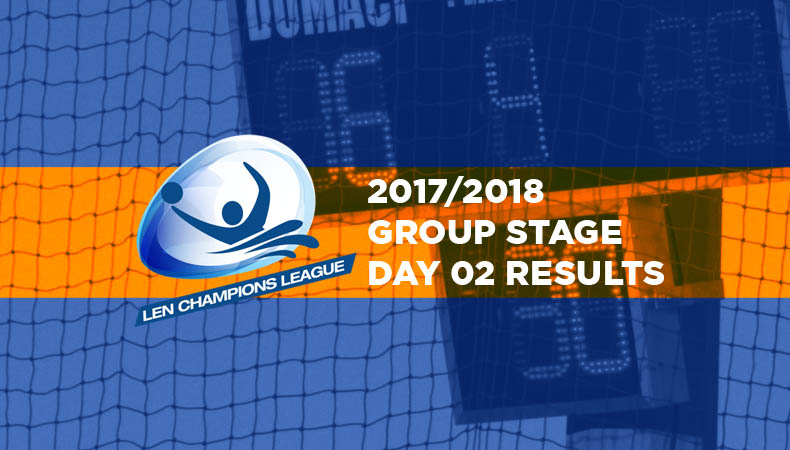 Italian competitors Recco and Brescia only scored six goals each but this was enough to earn big wins in their respective groups: Recco won the rematch of last year F6 bronze medal contest 6-4 in Eger (HUN) while Brescia defeated 2014 winner Barceloneta (ESP) 6-5. OSC (HUN) came from behind to score the last three goals against Hannover (GER), the winner was decided in the last second.

The two big ones in group A won their respective matches with ease. Jug (CRO) left behind the bad memories of its shocking loss in Moscow and blew away Partizan’s young team – it was already 5-1 at halftime, the next eight minutes saw six Croatian goals and five more came in the fourth to secure a 16-5 win for last season’s runner-up.

2016 runner-up Olympiacos (GRE) didn’t let Dynamo (RUS) think of repeating its big performance against Jug. The Greeks opened the encounter with a 7-0 blast, leaving no questions open for the remaining three periods. They stopped at 17:9 to gain their first victory in the prelims after a draw in Barceloneta two weeks ago.

OSC (HUN) claimed a big win over Hannover (GER) – it was a thriller decided by a last-gasp goal. The lead exchanged from time to time, the Germans went ahead before the middle break with two fine goals in 38 seconds (3-4) but the hosts managed to level the score in the third (5-5). The fourth prolonged the clash of the Brguljan cousins, Darko put Hannover ahead once more with his 3rd goal, what’s more, they were 5-7 up with 3:09 to go. But Drasko Brguljan buried two 6 on 5s (he had 4 hits in the evening), so with 52 seconds of time left, it stood 7-7. Hannover missed its man-up after a time-out and Nemanja Ubovic managed to score the game-winner in the very last second (the ball got a wicked deflection on Darko Brguljan’s arm…) to give a really valuable 8:7 win for the home side.

Something similar happened in Brescia where the Italians won a huge battle against Barceloneta (ESP). It was 3-3 at halftime, the hosts scored the only goal of the third quarter and managed to double their lead early in the fourth (5-3). Barceloneta pulled one back but Nikola Vukcevic replied immediately for 6-4. After a series of missed man-ups, the visitors put away a penalty with 79 seconds to go (6-5) but they could regain the possession for only the last six seconds and, unlike against Olympiacos in the first round, could not net the equalizer.

Group B also offered thrilling duels. Eger and Recco met a lot of times in the past decades, sometimes the Italians had huge wins – like in last May when they crashed the Hungarians 15-6 in the bronze medal match of the Final Six – sometimes they entangled into enormous battles.

This evening saw a fantastic contest: Recco took a 1-3 lead in the first, thanks to two great action goals within 41 seconds after 1-1. Soon they were 2-5 up but Strahinja Rasovic pulled one back 23 seconds before the middle break – it was the first goal not scored from a penalty against Recco (the Italians conceded a single penalty goal against Alphen and the first two also came from the 5m line in Eger). Rasovic netted his 4th to keep the hosts in the game, it was 4-6 and 5:02 remained from the third – but that was the last goal of the match. The remaining 13 minutes brought a brilliant defensive battle but no one could hit the back of the net, perhaps Eger would have had a better chance more than one player would have been able to score in the entire match.

The other Hungarian, Szolnok rolled on as the title-holder : They captured the European Super Cup on Saturday and taught a lesson to newcomer Steaua (ROU). A 4-0 start put the hosts on the right track and even though the second period was balanced, the following two ended in a rout, after 6-2 Szolnok produced a 9-1 run. (15:3)

In Berlin, both sides targeted their first win, but in the end, Spandau (GER) managed to clinch it against Sabadell (ESP). The Germans quickly jumped to a 4-1 lead and never looked back. By halftime, they were 6-1 up and still held an 8-3 lead deep into the third. The Spaniards had a better spell while coming back to 9-6 with 5:34 to go but couldn’t come dangerously close to Spandau. (11:8)

Jadran (MNE) also did a clean job in Alphen (NED). The Dutch fought hard and could remain in ‘visible distance’ for two and a half periods but ran out of gas and the Montenegrins scored four goals in 2:28 minutes towards the end of the third, jumping from 4-6 to 4-10 which decided the outcome.