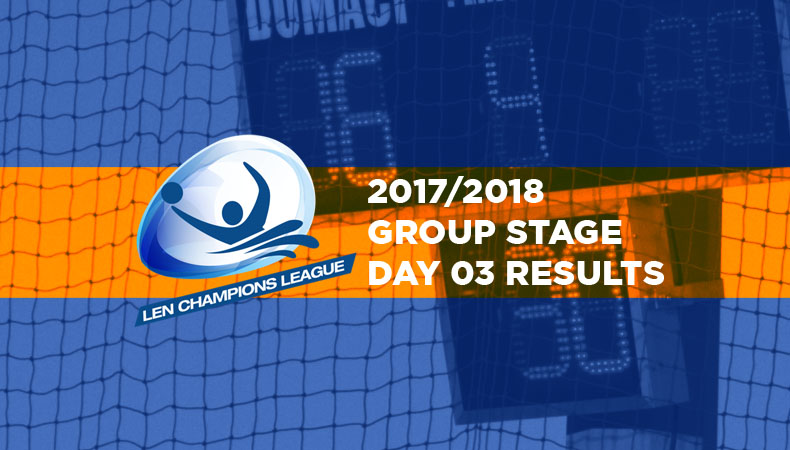 Upset of the day: Spandau (GER) beat title-holder Szolnok (HUN) in Berlin with a goal scored 23 seconds from time. Olympiacos (GRE) overcame Brescia (ITA) in a huge fight with a last-gasp game-winner while Barceloneta (ESP) blew away OSC (HUN) with surprising ease. After three rounds only Recco (ITA) stands with three wins in as many matches.

Every big run comes to an end once but Szolnok’s great march in the Champions League was halted in a somewhat unexpected place. In Berlin, underdog Spandau handed the Hungarians their first defeat since May 2016.

The title-holders jumped to a 1-3 lead but three straight goals from the Germans signed that it wouldn’t be an easy cruise for the visitors. In fact, they were 4-6 down early in the third before they replied with three connecting goals, still, it stood 8-8 before the last period. Spandau took the lead again, then came six scoreless minutes with plenty of missed chances (including three man-ups from Szolnok) before Gergo Zalanki scored his third from a free-throw with 52 seconds to go.

But it was Spandau which had the last laugh, hero of the evening, Mateo Cuk (brother of Milos who played in the opposite side) netted an action goal, his 4th, with just 23 seconds remaining. It means that the title-holder side lost its first encounter after it remained unbeaten in 15 consecutive Champions League matches.

The other Hungarian team in Group B was entangled in a big tussle too. Eger had to settle for a draw in Herceg Novi (MNE). It was an enormous physical battle, defenses were outstanding, both goalies did a great job. Jadran took a 1-0 lead, the visitors needed 9:38 minutes to score their first goal but then with two penalties they went 1-3 up by the middle of the third. Jadran, scoring again after 13:56 minutes, could equalize before the last break and even took the lead in the fourth but Eger could go even.

Despite having 5:15 more minutes neither side could win the game, the Hungarians offense looked a bit weak, they netted only four in their second straight match but at least they earned a point, unlike three weeks ago against Recco (ITA).

The Italian giant didn’t have any trouble with beating newcomer Steaua (ROU). With a 5-0 rush in the first, Recco put the encounter on the right track though, a bit unusually, they conceded four goals in an action-packed second quarter. Still, their win was never in danger and by the end of the third day, they remained the only side with three wins in the entire field.

In the clash of the two sides without points, Sabadell (ESP) overcame Alphen (NED) in a great fight. The Dutch were keeping up till late in the third but after 7-7 the Spaniards netted three connecting goals and Alphen could not come closer than two in the remaining 3:28 minutes.

Group A saw three one-sided matches and a thriller. The latter one was produced by Brescia (ITA) and Olympiacos (GRE) – the Greeks got the better start and went 0-2 up but the hosts responded with three straight goals in the second. The Italians held on and seemed to be en route to another nailbiting win after beating Barceloneta 6-5 on Day 2, but this time their visitors had more in the tank.

Brescia led 6-5 once more with 3:26 till the end but Paulo Obradovic equalized soon. In a dramatic finish, he then converted a man-up, securing a crucial win for Olympiacos with 4 seconds time left.

Barceloneta (ESP) played a perfect match against group leader OSC (HUN) and simply blew the Hungarians away. The hosts were 9-2 up after three periods, OSC could pull back a couple of goals after 11-3 but it didn’t impede on the hosts celebrating their first win.

Jug Dubrovnik in the zone against Hannover

Jug (CRO) didn’t leave any chance to Hannover (GER) as they rushed to a 3-7 lead and never looked back. Though they couldn’t score in the third but returned with five more in the last period, a kind of proof that they had left their opening round embarrassment in Moscow behind.

Dynamo (RUS) also recovered from the defeat they had in Piraeus – still,the Russians faced a tough challenge in Belgrade. The young Partizan side was trailing by a single goal before the last period (9-10) but ran out of gas for the final eight minutes. They missed crucial powerplays, four alone in this quarter, while Dynamo netted four goals and earned three valuable points.