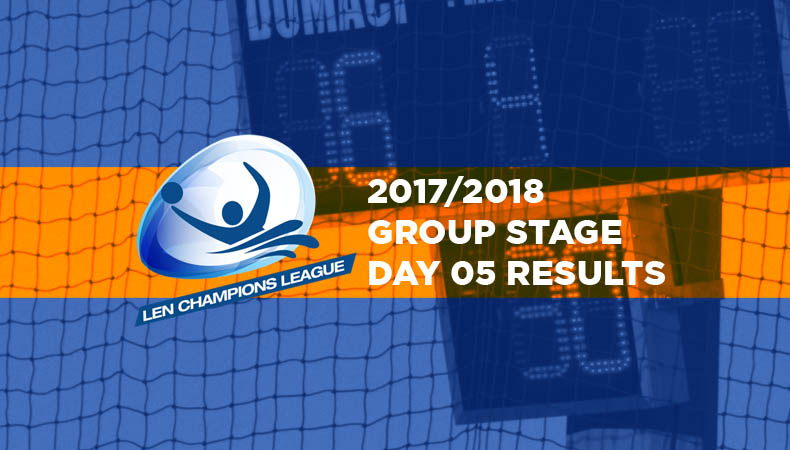 Spandau (GER) made it once more: after beating title-holder Szolnok (HUN) 10-9, the Germans beat the other Hungarian side, Eger, it was 10-9 again. The Berliners ‘upgraded’ themselves to serious F8 contenders, topping the group in the company of Szolnok and Recco (ITA). Brescia (ITA) earned a big win against last season’s runner-up Jug (CRO). This was good news for Olympiacos (GRE) which remained the only unbeaten side in the entire field since Recco (ITA) halted Jadran’s (MNE) run in the other group.

Though it’s still some days to go until Christmas, Olympiacos already awarded themselves a great present in Group A: the Greeks earned a valuable win in Budapest, beating OSC (HUN) with a convincing performance, while their rivals dropped points as Barceloneta (ESP) and Dynamo (RUS) tied, and arch-rival Jug lost in Brescia.

Olympiakos solidifies its lead against OSC

The Greek side, runners-up in 2016, took control early in the third period: they dominated the first half while going 3-5 up, added three goals soon for a 3-8 lead and OSC could never recover from that. The Greeks already broke three points clear after five rounds and they are the only unbeaten side in the entire field while the Hungarians lost their third straight match (twice at home), a disappointing run after two wins in the opening rounds.

On paper, Jug seemed to be the most threatening rival for Olympiacos but the Croats seem to be a bit weaker than in the previous years when they won the trophy in 2016 and came second last May. They lost in Moscow, drew at home with Barceloneta and now lost again in Brescia. It was a heated, action-packed match with 35 exclusions, where the Italians made most of their chances while the Croats had some ups and downs, including two penalty-misses.

Brescia scored three unanswered goals after 3-3 and was still 7-4 up early in the third but Jug scored two before the last break. With 6:40 to go the Croats equalized for 7-7, and in less than a minute they could have gone ahead but missed their second penalty shot. Christian Presciutti buried an extra then Vincenzo Renzuto, who had failed to put away the penalty earlier, scored from a dying man-up with 2:37 from time. At 8-8 Jug had another man-up but missed it, unlike the Italians who scored the game-winner with 0:25 to go. Jug got another 6 on 5 in the last seconds but couldn’t save the match to a draw.

In the 3-1-0 scoring system, ties mean two dropped points from the mathematical point of view. Barceloneta counts three draws so far, the second at home – though it might also be regarded one point earned at least as against Olympiacos and now against Dynamo (RUS) they had to fight for the equalizer. The Russians took a flying start and rushed to a 0-3 lead but the hosts managed to get back to even by the middle of the second. Dynamo geared up once more and led 3-5 at halftime. The third period belonged to the Spaniards, they leveled in 64 seconds then took the lead for the first time at 6-5. The visitors hit back in the fourth, Nikolay Lazarev netted two action goals in a span 45 seconds (it was his third and fourth goal in the game) but the home hero Alberto Munarriz also scored his fourth for 7-7. There were 4:31 minutes left but neither side could hit the winner, making the ranks extremely balanced.

Hannover (GER) did a clean job while beating Partizan (SRB) with ease: the young Serbs couldn’t stay close too long, the German side took a commanding 9-2 lead by halftime and with this win, they are still part of the hunt for the F8 berths.

The other German club, Spandau caused another upset in Group B and became the nemesis of the Hungarians. They had shocked Szolnok in the third round and after the title-holders now they sank last season’s semi-finalist Eger as well.

The visitors jumped to a 0-3 lead early, Spandau responded well and was back to the match already in the first period (3-4), then equalized before halftime despite being 5-7 down. In the third, the Germans sat into the driving seat netting two action goals for 9-7 while Eger’s struggles were more and more visible. They missed three man-ups in a row when Balazs Harai scored again they had been 10-7 down already. This miserable spell lasted 13:40 minutes, produced a 5-0 partial score favoring the Germans and ultimately cost the match for the Hungarians. Harai netted his third action goal for 10-9 with 2:32 to go but they were unable to equalize in the remaining time. Thus Spandau will have extremely happy holidays with 12 points, as many as 2015 winner Recco and 2017 winner Szolnok collected so far – something perhaps not even the Germans hoped before the start of the season.

Sabadell (ESP) lost a crucial home game to Steaua (ROU), failing to keep up with Eger. The visiting Romanian side rushed to a 1-5 lead and was 4-7 up at halftime, but the hosts kept coming back and before the last period they trailed only 7-8. Soon it was even (8-8) but Steaua hit twice in 51 seconds. Soon their coach was expelled from the match and with 2:23 to go Sabadell equalized again for 10-10. They got a couple of golden chances soon, had a 6 on 4, then a 6 on 5 but missed both and that cost dearly. With just 9 seconds from time Adria Delgado hit the game-winner for Steaua from action, a great way to earn their historical first victory in the Champions League.

The two giants of the group enjoyed some easy cruising this evening. Recco halted Jadran’s run with a merciless win in Herceg Novi. Though the Montenegrins, unbeaten in the first four rounds, managed to take a 2-1 lead but in the next 14:19 minutes the favorites showed their strength, staged a 0-6 run which decided the outcome. The young home side ran out of gas for the last eight minutes when Recco added seven more goals.

Szolnok with no doubts against Alphen

Szolnok won in Alphen (NED) in style. Though the Dutch had a brighter spell after 0-4 when they climbed back to 5-7 in the second period but the title-holders tightened their defense and produced a 1-10 run in the remaining 18 minutes in the last Champions League match of this year.