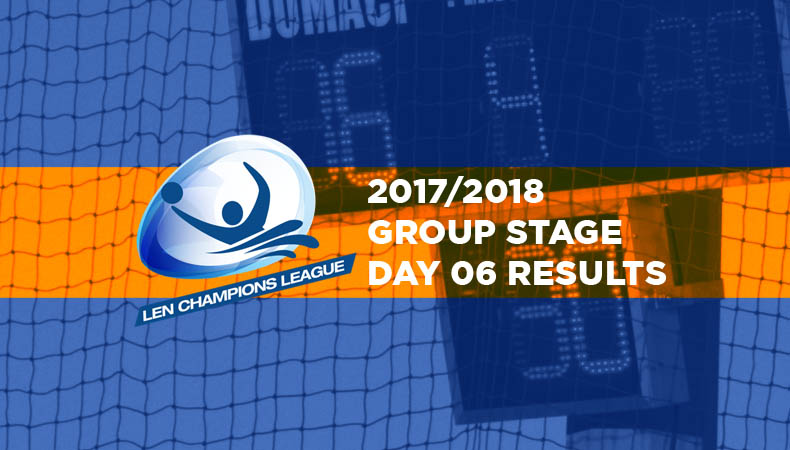 Olympiacos (GRE) is on the right track to finish atop in Group A as they have already broken five points clear as closest rivals Dynamo (RUS) and Brescia (ITA) had to settle for a draw in a thrilling match. In Group B the top three sides collected three points again, giants Recco (ITA) and Szolnok (HUN) did it with ease while surprise team Spandau (GER) netted the game-winner in Bucharest in the very last second.

Another great win for Olympiacos, this time over Hannover (GER) but the Greek got even better news as their closest chasers Dynamo and Brescia had to settle for a tie. Olympiacos didn’t leave any hope for the Germans as they rushed to a 6-0 lead by halftime. Hannover could get on the board only in the third period and could get a bit closer in the third and fourth but the Greeks’ triumph (11-7) was never in danger.

The battle of Dynamo and Brescia turned into a real thriller. The Italians took the lead twice in the opening eight minutes then Dynamo went 4-2 ahead in the second but the visitors equalised by halftime (4-4). Before the final quarter the Russians were 6-5 up and by netting two in a span of 47 seconds they seemed to be in a great position at 8-6 with 3:48 to go. Brescia responded well, however, a quick action goal, then a buried 6 on 5 put them on level once again (8-8). What’s more, after they killed Dynamo’s man-up Nicholas Presciutti scored for 8-9 when 59 seconds remained on the clock. But they couldn’t survive the next man-down as Ivan Nagaev sent the ball home 25 seconds from time. Brescia had the last possession after a time-out but the score didn’t change (9-9).

Jug back on track after win against OSC

The game of Jug (CRO) and OSC (HUN) was somewhat a special edition of the show called ‘Survival’ as the winner reserved the chance to keep up with the top four while the loser should fall behind. Jug caught the better start and led 2-0, then 4-2 and 6-3 but the Hungarians chased them almost all the way. Though the Croats went 9-5 up deep into the third but with 4:04 minutes to go OSC was still close at 9-7. The next 41 seconds decided everything, however, as Jug netted back-to-back action goals for 11-7. OSC had a late surge but could only narrow the gap (12-10).

Barceloneta (ESP) didn’t commit any mistake in Belgrade, they built a fine 3-7 lead against Partizan by halftime and netted four straight goals in the third to gain full control. This 5-15 victory means that the group is already extremely tight as only two points separate the fifth placed Spaniards from Dynamo sitting in the second position.

In Group B the game of the day was played in Bucharest where the surprise team of the season Spandau (GER) paid a visit. And the Germans didn’t leave the pool empty-handed again. It was a fantastic fight, host Steaua jumped to a 2-0 lead and Spandau needed 10:48 minutes to strike first but late in the second they netted two more in 49 seconds for a 2-3 lead at halftime. The Romanians geared up in the third and levelled for 4-4 but an action goal early in the fourth sent Spandau ahead again. A huge battle ensued and Steaua’s efforts paid off 24 seconds from time as Dorde Filipovic equalised from an extra.

Still, the Germans had the last laugh, they earned a man-up three seconds from time and with a single second to go Tiberiu Negrean netted the winner (5-6). A Romanian killed the dream of the Romanians – and kept Spandau on level with Szolnok (HUN) and Recco (ITA) but in next two ‘sessions’ they face Recco, perhaps the toughest tests of all so far.

The young players of Jadran (MNE) learnt another lesson at home: after four great matches with three wins and a draw the two world-class clubs of the group proved too strong for the Montenegrins. Recco won 5-15 in the previous round, now Szolnok blew the hosts away in two periods. The title-holder Hungarians produced top quality water polo in the first half and took a 0-9 lead. Jadran could score its first goal after 20:37 minutes at 0-10 and the youngsters managed to keep up in the rest of the games, reduced the gap to eight (6-14).

The other Hungarian side Eger collected the three points without tensions: after a shaky start – led only 2-1 against bottom-ranked Alphen (NED) after eight minutes – they netted four straight goals and rolled on to a 15-4 win. This puts Eger on equal points with Jadran on the 4-5th places but while they trail by five points to the top three, their next two matches are due against fellow Hungarian side Szolnok which looks quite a challenge.

The last game of the day was a bit closer than expected, though only for two periods. Sabadell fought bravely and stayed in ‘visible distance’ in Recco’s home until halftime. Then the 8-time winner Italians switched gears and staged a 6-0 rush in the third and that was enough to clinch another easy win (13-4).