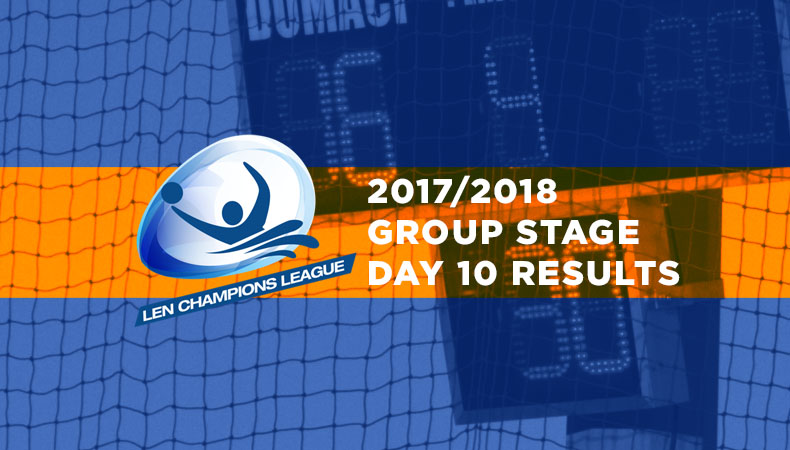 Crucial wins for Jug and Barceloneta

2016 winner Jug Dubrovnik (CRO) and 2014 champion Barceloneta (ESP) took huge steps towards the Final Eight as they managed to beat their closest rivals Brescia (ITA) and Dynamo (RUS) respectively. Group-leaders Olympiacos (GRE) and Recco (ITA) rolled on and the two Hungarian sides in Group B, title-holder Szolnok and Eger are also set to qualify for the F8 in Genova.

Jug (CRO) and especially Barceloneta (ESP) were the big winners of the day in Group A. The Spaniards managed to sail away a brilliant win from Moscow and this gives the 2014 winners a five-point advantage ahead of the Russians. Barceloneta won the match in the middle two periods as they shut out Dynamo for 14:13 minutes while scoring six straight goals. They went from 2-1 down to 2-7 up and never looked back (5-9).

2016 winner Jug did a fine job against Brescia (ITA): they netted three connecting goals in a span of 2:04 minutes in the second quarter to take a 5-2 lead. The Italians fought hard but couldn’t get much closer, early in the fourth they climbed back to 7-5 but a double in 59 seconds secured the crucial three points for the Croats (10-7).

The game of Olympiacos (GRE) and OSC (HUN) was decided by halftime when the Greeks led 7-1. They slowed down a bit for the remaining part letting the Hungarians back a bit but their victory was never in danger (10-7) so the top-placed side has managed to keep the four-point gap ahead of the chasers.

Bottom-ranked Partizan (SRB) had a promising start against Hannover (GER) but experience and physical power helped the Germans to take control and they prevented the young Serbs from earning their first points (11-15 – last season Partizan’s only win came against Hannover).

The favorites rolled on in Group B. 2015 winner Recco (ITA) won 10-5 with ease against Jadran (MNE) in the Sciorba Pool in Genova, the future site of the Final Eight tournament in June. The Montenegrins still have a slim chance to return here since Spandau (GER) also lost – Eger (HUN) out-powered the Germans in the second half.

Deep into the second period, Spandau was 2-4 up, few would have guessed that they would not score any more goal till the end of the match. It happened: Norbert Hosnyanszky’s trademark ‘helicopter’ shot found the back of the net once more to lift the spirits of the Hungarians. From the third period they wore out the Germans who were missing their injured Serbian center-forward Mateo Cuk and that didn’t help them in offense. Spandau couldn’t score in the last 18:42 minutes while Eger built a 6-4 lead by early in the fourth and doubled the margin with two late goals within 28 seconds (8-4).

Title-holder Szolnok (HUN) performed well its ‘compulsory dance’ while downing (17-4) newcomer side Alphen (NED). Recco holds a secured berth as the host of the F8 though the Italians are the first ones making the qualification mathematically as well and both Hungarian clubs are set to join them. Spandau sill leads by five points in the hunt for the last spot but the math still gives some hope to Jadran as well as Steaua (ROU) as the Romanians maneuvered themselves closer with another great win against Sabadell (ESP). It was a thrilling encounter, the Spaniards scored the last three goals to come back to 10-9 but couldn’t save the match to a tie in the remaining 64 seconds.