LEN Euro Cup: A lot of goals and close contests 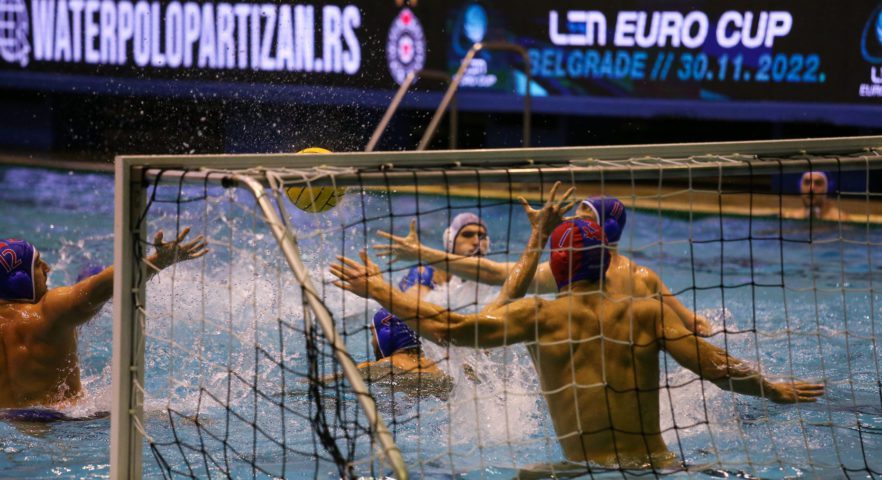 There are many open questions after the 1st leg of the LEN Euro Cup eighth finals.

Sabac beat Barcelona 13:10. The differences were smaller in other matches, and two games ended with no winner. Partizan edged out Panionios 12:11, Honved was better than Szolnok (13:11) Primorac shared the points with Tourcoing (7:7), just like in the Champions League qualifications. The Romanian derby, Steaua – Oradea, ended in an 8:8 draw.

The Italian derby was a game with even 33 exclusions (18 for Ortigia and 15 for Savona) and only nine goals. Savona scored seven of these nine goals and made a big step toward the quarterfinals. The first quarter set the tone of the match. Savona earned a 3:0 lead. Gorria put Ortigia on the scoreboard three seconds before the first break. Andrea Condemi cut the deficit to one (2:3) in the 11th minute, but Ortigia couldn’t find the net in the remaining time. Savona, playing excellently in defense, commanded by Gianmarco Nicosia, and led by Bogdan Djurdjic in the attack, was building an advantage step-by-step. Two minutes before the end, Patchaliev set the final score. 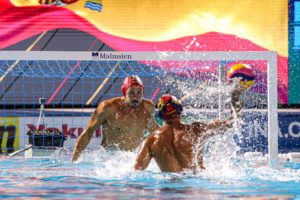 There were not many action goals. Ortigia scored both goals from a man-up (conversion 2/15). Savona’s percentage of extra player shots was slightly better (3/16), and the hosts scored one goal from a penalty shootout.

Crvena Zvezda fought hard, but it couldn’t surprise Vasas, one of the favorites for the trophy. The visitors scored the first goal in the match, but Vasas responded with four for a 4:1 lead early in the second period. Still, Crvena Zvezda struck back and cut the deficit to one goal twice (4:5, 5:6). The third quarter was crucial for the final score. Vasas stretched the margin to four (10:6). Sava Randjelovic, who won the 2013 Champions League playing for Crvena Zvezda, made it 11:6 in the first minute of the last period. In the remaining time, the teams exchanged the goals and Vasas kept a 5-goal distance.

Before the game, candles were lit by the fans in front of the pool in honor of Vasas and Hungary water polo legend Gabor Csapo, who passed away four days ago at the age of 72.

Trieste defeated Noisy-le-Sec in a flood of goals. Neither of the defenses showed its best face, but Trieste’s attack was much better then the hosts’, and Trieste went home with a 6-goal advantage. Noisy took a 4:2 lead (6th minute), but the visitors’ finished the first quarter in an excellent way, with three goals to earn a 5:4 lead. Early in the second, the French leveled at 5:5. Trieste built a 7:5 lead. Denis Do Carmo (one of only three Noisy’s players who got on the scoresheet) scored for 6:7 in the 11th minute. Then came the crucial moments. Trieste Between 13th and 23rd minute, Trieste produced a 7:0 run. It gained a 14:6 advantage and maintained the difference until the end.

Sabac is close to a historic achievement and the quarterfinals of the LEN Euro Cup. The Serbs earned a solid 3-goal advantage against Barceloneta, but nothing is over yet.

Barcelona leveled the score twice in the opening minutes (1:1, 3:3). But, Sabac scored the last two goals in the first quarter. From that point on, the hosts were always ahead. In the 12th minute, Ognjen Stojanovic extended the margin to three (7:4). In the third period, Sabac had a 4-goal advantage (9:5, 10:6, 11:7), but the Spaniards were a better rival in the final minutes. They halved the deficit in the 29th minute when Mallarach converted a man-up for 10:12. However, Stojanovic answered immediately, also from a 6 on 5. There were no goals in the remaining time..

The Hungarian derby was a neck-and-neck race. Honved led throughout the match, but the hosts’ advantage was never bigger than three goals. In fact, Honved had a 3-goal lead just three times in the second (5:2 and 6:3), and third quarter (9:6). Szolnok chased the rival and cut the deficit to one several times, but it couldn’t equalize. Honved entered the final minute with a 12:10 advantage. Matyas Pasztor added his sixth goal for 11:12 with 45 seconds left on the clock. Still, Honved regained a two-goal advantage as Honsyanszky set the final score 20 seconds before the end.

Partizan beat Panionios, but the Serbs had a big reason to regret it. They could make a much bigger difference before the trip to Athens. The hosts got off to a flying start. In the middle of the second quarter, the Black Whites had an 8:2 lead. However, a young home side couldn’t continue in the same rhythm. Panionios reduced the gap to two (6:8) before the end of the second quarter. Partizan earned a three goal lead in the third period (9:6, 10:7). The visitors came very close to the Serbs in the 23rd minute (9:10), but Dimitrijevic closed the third quarter with a power-play goal for 11:9.

At the beginning of the final period, Kopelaidis scored for 10:11. After that, there were no goals for a while. Partizan regained a 2-goal lead after Dimitrijevic added another goal from a 6 on 5 at 00:49. But, Gounas responded in the same way with 17 seconds to go, and Panionios can be very satisfied because it avoided a convincing loss.

Tourcoing arrived in Kotor as a favorite, but it failed to beat Primorac, just like a month and a half ago when these two teams shared the points in the Champions League qualifications (10:10).

Primorac started better in the Champions League match and had an 8:3 lead. Today’s game had a different storyline. Tourcoing built an early 2:0 advantage and kept it until the middle of the second period (5:3). Then, Primorac produced 4:0 series and went to 7:5 (25th minute). Tourcoing’s goalless phase lasted for 13 minutes. But, then they scored two quick goals and leveled at 7:7. In the last six minutes, both teams missed a few nice chances. There were no goals, so nobody has an advantage before the return leg.

Oradea dictated the pace in the first quarter of the Romanian derby. The visitors were 4:1 up already in the 6th minute. They had a 5:3 in the middle of the second period. But, Steaua started climbing back, scoring three goals in a row for a 6:5 lead. Still, at halftime, the sides were tied at 6:6. After a goalless third period, Steaua took the lead twice (7:6 and 8:7), while Oradea’s Mihnea Gheorghe set the final score from a penalty shot in the 30th minute.

The return matches are on December 14.