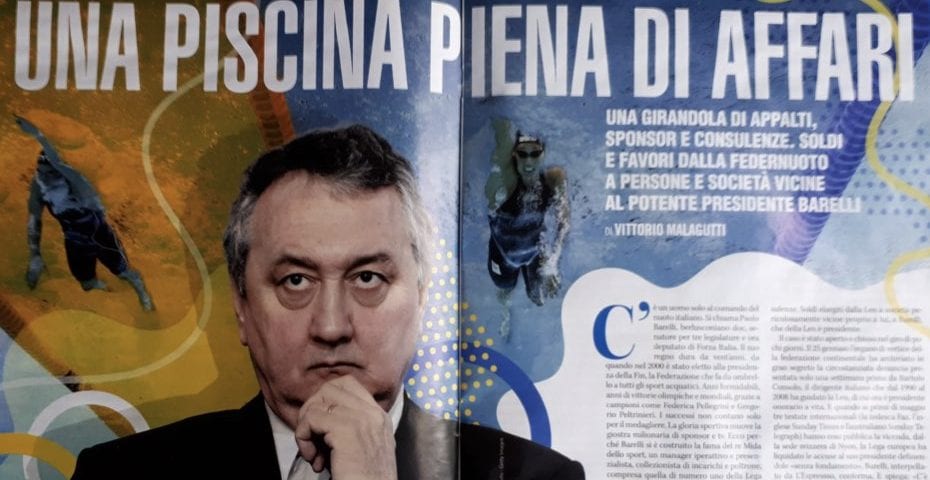 The Italian weekly magazine L’Espresso published the article in their yesterday’s edition. With the permission of the author Vittorio Malagutti, an investigative journalist, we are publishing a translated version.


Companies close to Paolo Barelli, the number one in Italian swimming for twenty years, have signed contracts with the Italian Swimming Federation. Which also put the directors of two companies controlled by the powerful sports manager and deputy of Forza Italia on the payroll.

There is a single man in charge of Italian swimming. His name is Paolo Barelli, Berlusconi doc, senator for three legislatures and now a member of Forza Italia. His reign has lasted for twenty years, ever since he was elected to the presidency of FIN (Italian Swimming Federation) in 2000, a Federation that acts as an umbrella for all water sports.
Formidable years, years of Olympic and world victories, thanks to champions like Federica Pellegrini and Gregorio Peltrinieri. Successes don’t count only for the medal collection. Sports glory moves the millionaire carousel of sponsors and TV. This is why Barelli has built a fame as the King Midas of sport, a hyperactive manager and presidentialist, collector of positions and armchairs, including the highest one in LEN. However, for some months now, the 66-year-old, who has spent life between swimming pools and politics, first as an athlete then as a sports and parliamentary manager, has been forced to swim against the current. A bad history of assignments and consultations follows him. Money given by LEN to companies dangerously close to him.

The case was opened and closed in a matter of days. On January 25, the top body of the continental federation secretly closed the detailed complaint lodged just a week before by Bartolo Consolo, the Italian executive who led LEN from 1990 to 2008, of which he is now honorary president for life. And when in early May three international newspapers (the German Faz, the English Sunday Times and the Australian Sunday Telegraph) made the matter public, from the Swiss headquarters in Nyon, LEN dismissed the accusations against its president, defining them as “without foundation”.
Barelli, asked by L’Espresso, confirms. And he explains: “There has been an internal audit and LEN has taken note of the investigation’s assessments.”

However, that story seems far from closed. And not only because in recent days the file promptly shelved by LEN has arrived on the table of the federal prosecutor of FIN, the Roman lawyer Alessandro Sammarco, who will now have to decide whether to open an investigation on the president. L’Espresso found that a court of relatives, friends and trustees is moving around Barelli, names that partly occur in the report just filed. Internal FIN documents and corporate accounts describe a long business trail that goes all the way to Florida, the United States, and finally leads to Italy. Procurement, sponsors, consultancy: a pinwheel that has awarded a few lucky ones close to the great head of national swimming, a money machine that can count on around 180 thousand members and boasts a budget with revenues of over 40 million EUR, of which a third, through the CONI (Italian National Olympic Committee) comes from public contributions. Only football, of all the Olympic sports, can count on more substantial state funding than those earmarked for FIN.

The story is complicated and unfolds over several years. It is better to go in order and start from Eurozone, a tiny company based in Perugia. On 3 October 2016, the FIN board chaired by Barelli gave the go-ahead for a contract that entrusts the Umbrian company with the search for new sponsorships and the management of relations with suppliers. The contract is worth €35,000 a year, to which any commissions should be added in the event of agreements with new commercial partners. A year later, as revealed by the papers filed in the complaint submitted to LEN, the Eurozone itself collected €20,000 as compensation “for commercial assistance” in a sponsorship contract for LEN led by Barelli. A great start, if you consider that the Perugia company, a limited liability company, was born only in March 2015 with a paid-up capital of €2,500.

To understand who pulls the Eurozone ranks, it is not enough to consult the shareholders’ register. Almost all of the capital, 97 percent, refers to Prime International consulting, based in the heat of Miami, Florida. A name that says little or nothing, except that this star and stripes sign refers to the Italian Mattia Fella, qualified in the US commercial registers as the representative of the tiny Miami company. Barelli knows Fella well. And Espresso describes him as a “good person to whom we have entrusted marginal assignments”. Business matter, but not only.

In 2018, Cristina Fella, one of the daughters of the patron of Eurozone, was hired in FIN, after an unpaid internship period. Furthermore, according to what L’Espresso was able to verify, a close collaborator of Barelli comes from the circle of friends and associates of Fella. His name is Giuseppe Leoni and he was on FIN’s payroll with a consultancy contract expired a few days ago, on June 30th. In 2011, Leoni created a property service company in Miami named Miami Global Service. And his partner in this initiative was Fella. Now Leoni is the sole administrator of a small Roman company, Punto Sport. Here the circle closes because Punto Sport is 90 percent controlled by Barelli. In the shareholders’ register, with a 10% stake, the other shareholder is Antonio De Pascale, Federal Councilor of FIN. Punto Sport has an established sports center in Rome, in the Portuense district, the Villa Bonelli sporting center, with a swimming pool and gym not far from the Aurelia facility, the historic Capitoline swimming club founded by Barelli in the 1980s.

Before popping up among the FIN papers, Fella’s name had already ended, despite himself, in the newspapers. An episode far in time and now delivered to the national political news archive. An entrepreneur in the travel sector, already the owner of the Visetur agency, which went bankrupt in 2011, fifteen years ago Fella moved casually among the palaces of power in Rome. Until in 2008, he stumbled on an investigation by the capital’s public prosecutor’s office on alleged illegal financing to the then Minister of the Environment, Alfonso Pecoraro Scanio. Six years later, in 2014, the indictment arrived. According to the accusation, Fella allegedly made helicopter travels, stays in luxury hotels and holidays available to Pecoraro Scanio. The proceeding ended without convictions or acquittals: filed as a result of the prescription.

In the meantime, Fella had already taken root in Florida, starting some real estate business. All this, however, without ever losing sight of the motherland. In Rome, for example, the relationship with Barelli has consolidated in recent years. In September 2016, Fella was described in a report of the Federal Council of FIN as “a professional operator (….) specialized in intermediation in (sic) sports sponsorships”. Based on this presentation, the top body of FIN then instructed president Barelli to define a collaboration contract with Fella or with a company indicated by the latter. The contract reads in the federal papers concerns, among other things, “the search for new business partners”. Time a couple of weeks and, as mentioned, the agreement with the Eurozone is then signed in October 2016. A year later, the public company Terna, listed on the stock exchange, finances some stages of the national swimming youth team with €70,000 and the Fella company is paid a commission of 20 percent (€14,000) on the value of this contract.

However, swimming is not the only sponsor. On the upper floors in FIN they also find time to celebrate and do things big. In 2017, Italian athletes beat the record of medals won in a single edition of the World Cup. A great success that must be celebrated. And here on September 23, at the “Spazio Novecento” in Rome, the “Gala dei Campioni Azzurri Meravigliosi” is staged: 600 guests, dinner, toasts, music and dancing, an even more sumptuous replica of the event that had already taken place held in the previous two years.

Who organizes the memorable evening, with guests of honor all the champions of the national team? Eurozone, the company from Fella, thinks that obviously they can boast some competence even in the organization of parties and related things.

This is at least the assessment of the Federal Council of FIN, which on September 18, 2017 resolves to entrust the organization of the event only five days later to Eurozone, called the “specialized agency”. The expected expenditure amounts to €70,000. The same script is also repeated in the following two years. FIN renews its mandate in Eurozone, but the costs of the gala increase: €76,000 in 2018 for 650 guests and €83,000 for 550 guests in 2019.

Let’s recap: FIN celebrates, the business increases and the Fella company collects. Its accounts, the most recent ones, however, remain a mystery.

In fact, the last Eurozone balance sheet available for consultation dates back to 2016 and was filed in the chamber of commerce only in November 2019. However, the documents for the following three years have not been received. No problem, apparently. Barelli and his collaborators did not ask questions about a supplier company that does not publish its accounts at the deadlines established by law. Or it was preferred to close the door to doubts and suspicions. Moreover, LEN has also put the lid on the strange case of contracts to companies somehow related to its Italian president.

A name that emerges from the documents examined at the time by LEN, is that of CIR-AUR, who 80% belongs to Barelli and is flanked by the aforementioned De Pascale, the Federal Councilor FIN who, as mentioned, is a partner of the great head of Italian swimming also in the capital of Punto Sport. Between 2014 and 2016 CIR-AUR, an acronym for Costruzioni Immobiliari Romane Aurelia, has issued invoices to LEN for approximately €70,000. At that time Barelli was already at the top of the Continental Federation and therefore, in practice, he would have given green light to payments to himself. Another fact should be noted. The sole director of CIR-AUR is Franco Concordia, aged 83. The same Concordia who in 2020 is a consultant to FIN with a contract signed by Barelli himself, this time as federal president.

The reimbursement would have taken place on the basis of an agreement that dates back to 2012. All regular, therefore. In the same way, LEN has rejected the suspicions raised by former President Consolo on the role played by another Roman company, Elevan which is headed by Andrea Polimeno, an insurance agent who has long been in excellent relations with Barelli.

This time the payments, about €48,000, would have been the compensation for the assistance activity in the sponsorship contract stipulated by Len with the Italian insurance group Unipol Sai, a contract that is worth €850,000 for the period 2016-2022. Not just that. Elevan would also have participated as a consultant in the negotiations for the sale of television rights on swimming competitions. It is not clear, however, whether Roman society actually collected the agreed commissions. Last January, at the end of its very fast preliminary investigation, the LEN Council declared that everything was carried out in compliance with the rules. The surprise remains for the dual role of Polimeno, owner of Assieur consulting in Rome, one of the most important national agencies of the Unipol group. Elevan’s owner allegedly received compensation from LEN as a sponsor search consultant. And at the same time, he would have found himself having an insurance group as a counterpart to which he is linked by very close business ties. A rather embarrassing position. Who knows, maybe Polimeno will have talked about it with Barelli.

For many years, Assieur has had an exclusive relationship with FIN. All the policies of FIN members, policies with the Unipol brand, are managed by the Roman agency. The same that ended up on the continental federation’s payroll. Again with the go-ahead from Barelli. 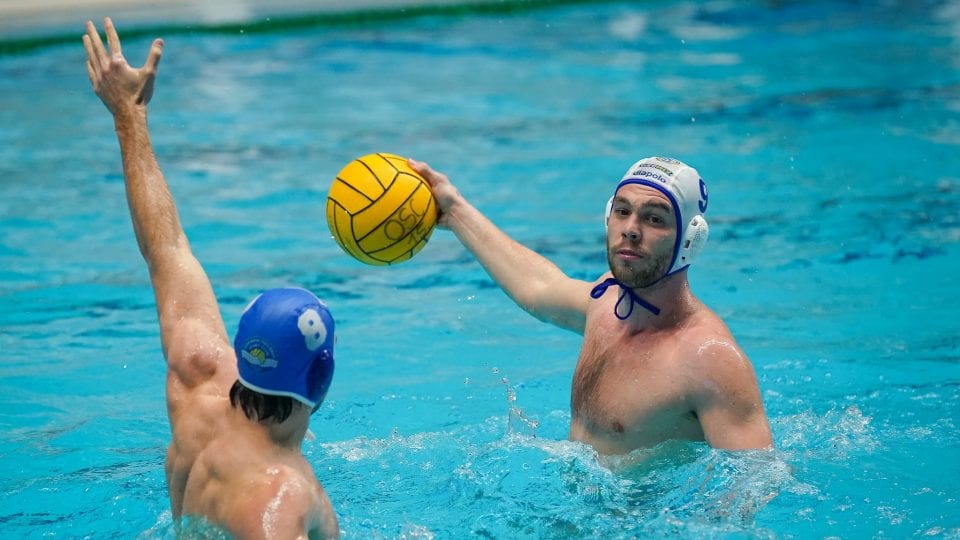 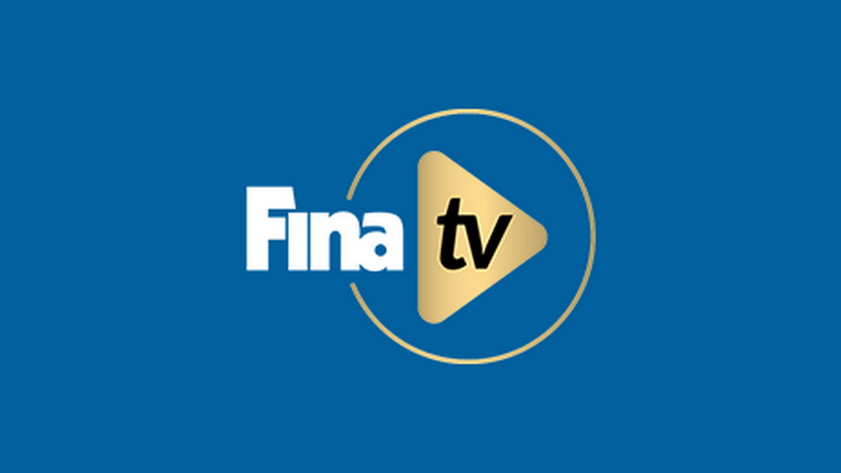