A superhero from the X-Men team joined the Pan-American Cup, Copa Uana, and visited São Paulo. And we’re not even joking.

Copa Uana is being played in São Paulo this week, and Brazil is eager to win. It’s a Pan-American Cup in which the first and second placed get to go to the World Water Sports Championships in Gwangju, South Korea, in July. It’s a difficult mission to fight against the USA and Canada. However, Brazil might have a superpower at their side.

Logan Wolverine is the Brazilian player wearing cap No.2 who shares a name with the mutant hero from the X-Men comic books and movies. Logan Wolverine de Oliveira Cabral is now 24 years old and has been playing water polo since he was 14. Back then he played for Botafogo, now he’s with Fluminense. The name was his father’s idea, who wanted to honor one his youth heroes when his first child was born.

“I was thinking about the other character: Conan the Barbarian. I also read the comic books long before the Arnold Schwarzenegger movie. It was a battle between Conan and Logan which my wife won and picked Logan Wolverine,” explained Ricardo Rubracha, Logan’s father. 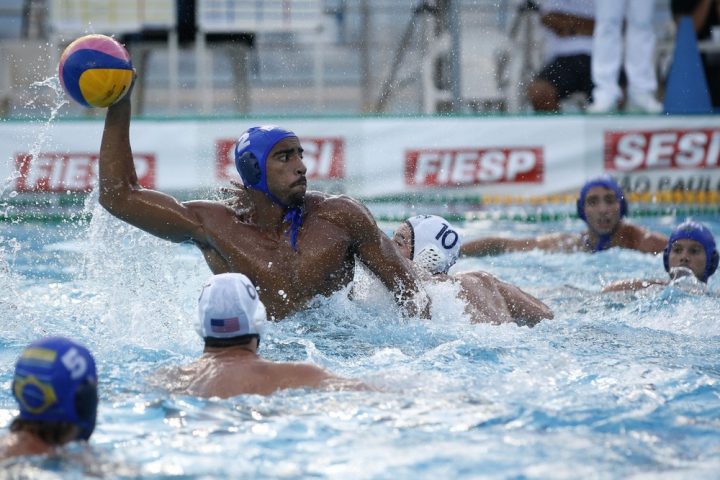 This year, Logan got his first call to the Brazilian team. The coach of the national team, André Avallone, said that he was already used to the athlete’s name because he remembers him from the early days. Though he thought it was a nickname.

“At first, I must say, it was scary. ‘Is it a name or a nickname?’ I thought. But then I found out it was official – Logan Wolverine. At first, you think it’s funny, but you get used to it. Logan Wolverine. With a ‘W’, even. A superhero, “Avallone said.

So if he’s a superhero, does he have superpowers?

“Most of all, he’s determined. Sometimes he comes home in pain, but I never hear him complaining about anything. He once even came home with a black eye and a broken nose, but he never said a word. He’s a fighter,” said Wolverine’s father.

“He’s strong, Logan is very strong,” the coach said about the 1.90m player.

However, no one is more fit to talk about his superpowers than Logan himself. What are the X-Men features he carried to the pool?

“My superpower is my will to win. It’s a constant feeling whenever I enter a game focused and with a purpose. I always want the best. My big hands also help – my grip holds the ball with ease. But my real claw is my constant desire to win the games,” Logan said.

He still wasn’t able to help Brazil against their main opponent of the Uana Cup in São Paulo. In the first round, Brazil lost to Canada, and in the second, they lost to the United States. They beat Argentina, though, and are playing against Canada again in the semifinals on Friday.

During this Cup, there are three selections looking for their place in the water polo world: Brazil, Canada, and Cuba. (The USA is already qualified for the main event and is a two-time Olympic and world champion).

Already in the sport for 10 years, Logan Wolverine only wants to advance, making a name for himself globally. A lot of people still don’t believe that’s his real name, but Logan has a plan to assure them – he’s to become the next big player in water polo.