Magnificent Seven for UVSE who are crowned champions of Hungary 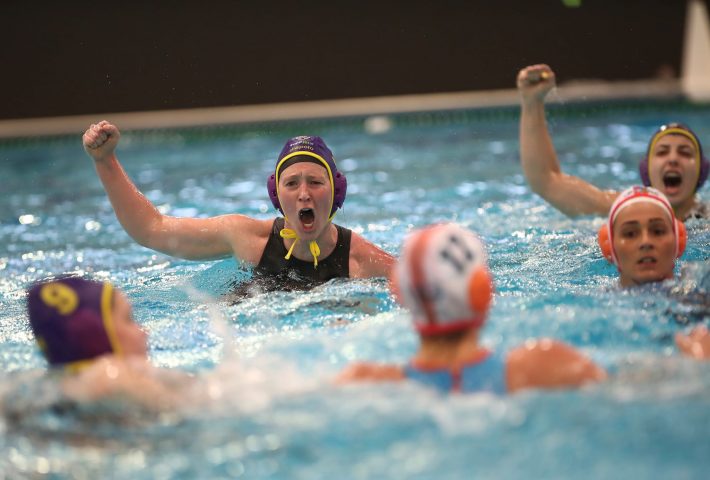 UVSE have won the Hungarian OB I for the 7th time in their history, defeating Dunaujvaros 14-12 today, and beating them over two legs to secure the league title.

The club from Margaret Island are worthy champions. They have dominated the league for much of the season, and despite a few blips along the way, including over the two legs of this tie, UVSE always look convincing enough to win any domestic match.

The game was definitely a spikey one today, as you would expect between these two fierce rivals. The brutality of the game at times was evident from the number of exclusions without substitutions – 5 for Dunaujvaros (Brigitta Horvath, G. Mahieu, N. Szabo, A. Mucsy and Reka Pal) and 2 for UVSE (Gabriella Szucs and Rita Keszthelyi-Nagy).

Tempers flared between several of the players, but also on the UVSE bench, as Marton Benczur was shown a red card in the third period.

Krisztina Garda had a fantastic game for her side, scoring some wonderful goals from the top, and bagging five overall in the match. Natasa Rybanska was once again a massive outlet for her side in the pit, winning exclusions but also bagging three, while Kamilla Farago ended her season how she played for most of the campaign – as a breakout star this season.

It seemed like, once again, Dunaujvaros were simply not able to compose themselves when it mattered. When UVSE applied the pressure, both psychically or on the scoreboard, they become too rattled to focus on their own game. Alda Magyari had to make a few decent saves in the match, but she hardly had to work too hard against a Dunaujvaros side that were misfiring.

What makes the UVSE project so attractive is how Marton Benczur and his team around him has managed to integrate such young talent into a such a seasoned and prolific side who are capable of winning titles. Nobody encapsulates this point more than the likes of Kata Hajdu, who netted a lovely lob to seal the win, or Panni Szegedi – who was immense today with three more goals, and is certainly one not only for the future, but for the present.

From many of the expressions on the UVSE players faces, you can see how much this 7th title means to them. The disappointment for Dunaujvaros was equally noticeable – who have finished second best to UVSE for the fourth time in a row.

UVSE started quickly, and established a 4-2 lead early on, which left Dunaujvaros chasing for much of the half.

Dunaujvaros then did take the lead in the match at the end of the second period, albeit for a brief moment. Kinga Peresztegi-Nagy was caught on the wrong side, and Greta Gurisatti made them pay.

And while much of the third period was close, with goals from Kamilla Farago, Gabriella Szucs and Panni Szegedi for UVSE, and goals from Geraldine Mahieu, Dorottya Szilagyi and Csenge Szellak, the game really heated up in the last 10 minutes.

An off-the-ball incident towards the end of the third period between Greta Gurisatti and Rita Keszthelyi saw both dismissed from the match. And seconds later, Marton Benczur’s remonstrations were enough to warrant a yellow card, before the referee on the far side took issue to something he said, which saw him see red.

Into the last period, Panni Szegedi gave her side the lead with a thundering shot taken across her body towards the top left of the net, giving Lilla Maczko no chance.

UVSE then had an all important two goal advantage when Kinga Peresztegi-Nagy found herself on the left; with a few fakes, Peresztegi-Nagy drilled the ball into the near post, to give her side a 11-9 lead.

Krisztina Garda pulled one back for her side with a central shot from the top, but when Natasa Rybanska drew the major foul from the pit, her quick thinking tossed the ball to the right arm of Gabriella Szucs, who restored UVSE’s two goal cushion.

The game continued to be very spiteful. UVSE probably should have had a penalty at one end after a goal side wrestle in the pit, but then Eszter Macsai appeared to strike Csenge Szellak, receiving only a normal exclusion.

But the nail in the coffin for Dunaujvaros was when the youngster Kata Hajdu weighed up a delicate lob on the left, and after a little hesitation, and a bit of a scrap between Rybanska and Szellak, the ball crossed the line to give UVSE a relatively huge advantage at 13-10 with three minutes left.

With just under two minutes to go in the match, Dunaujvaros were given a lifeline. Gabriella Szucs gave away a penalty, that Krisztina Garda tucked away neatly.

However, a lack of discipline at discipline from the fiery Geraldine Mahieu at centre gifted UVSE a man-up play, that Kamilla Farago put away easily. The ball was rifled into UVSE’s number eight, but she took it well, and let a a driven bouncer into the near-side of the  Dunaujvaros goal.

The last goal of the game for Dunaujvaros was arguably the best, although it will be very much overlooked due to the result. Krisztina Garda again found herself in space on the top, and from 7m meters, her cross-cage effort was unstoppable.

However, UVSE had won on the day, and were the better side over the two matches. On the whistle, Gabriella Szucs dashed around the pool to her coach, Marton Benczur, and when the rest of the team joined them, he was inevitably thrown into the pool