The list of the teams that will play at the Champions League Final Eight in Belgrade (June 3 – 5) is almost complete.

Marseille defeated Spandau on Day 9 of Group A and qualified for the Final Eight. The French will finish 3rd if they don’t lose to Olympiacos on Wednesday. Jug defeated Ortigia to secure 2nd place in this group. The day was closed by an encounter between two former European champions – Pro Recco downed Olympiacos.

The third “bubble” of Group B started in Budapest today. The highlight of round 8 was a derby, Barceloneta – Brescia. Barceloneta came back from four goals down to record a 10:9 victory and keep 1st place. Denes Varga was, with six goals, the hero of Ferencvaros’ win over Hannover. Dinamo Tbilisi defeated Jadran Herceg Novi and caught up with Hannover in the standings.

Jug entered the game with a clear objective – to win three points and secure 2nd place. Ortigia had no pressure. The Italians lost all chances to advance to the F8 yesterday. But they played well today and took an opening lead. The Croats found themselves 1:3 down already in the 4th minute. After that, they produced a 4:0 series to earn a 5:3 advantage. Ortigia halved the distance before the end of the first period. The second quarter proved decisive for the outcome. Jug built a 3-goal lead (8:5 and 9:6). The Croats had a perfect percentage of the extra player shots in the first half (4/5 and one goal from a penalty shot). In the second half, the defenses dominated—that rhythm suited Jug, which didn’t let Ortigia equalize. Still, the Croats couldn’t relax until the end. Ortigia came very close twice (8:9 and 9:10). But, Jug controlled the match. 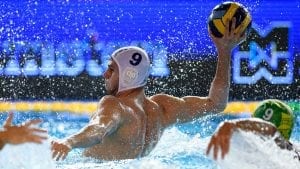 Spandau played excellently against Pro Recco yesterday, but a decimated team of the German club ran out of gas after an exhausting game against the Italian giant.

Still, the Berliners kept up with Marseille for more than two quarters. After a low-scoring first half, Marseille had a slim 3:2 advantage. Marino Cagalj leveled the score in the 17th minute (3:3), but Marseille tightened its defense after that and kept Spandau goalless for 15 minutes. By the end of the third period, Marseille built a 6:3 lead. Andrija Prlainovic opened the final quarter with a goal from a penalty shot. Ante Vukicevic added a goal from a distance in the 28th minute. Marseille went 8:3 up, and that was the end of the contest. Spandau scored two consolation goals in the last 130 seconds. 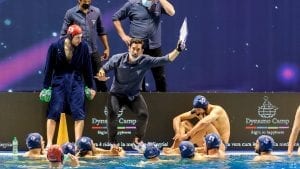 Recco opened the match with a 2:0 lead. The Greeks leveled the score in the 8th minute (2:2). Shortly after, the encounter between the former European champions turned into a one-sided contest. After two goals by the Greeks’, Recco responded with a 3:0 series and jumped to a 5:2 lead. They maintained the difference until the middle break (7:4). In the second half,  Olympiacos “showed the white flag’ and saved energy for tomorrow’s duel with Marseille, which will determine 3rd and 4th place in the group. Recco secured the win with a 5:0 run in the third period. 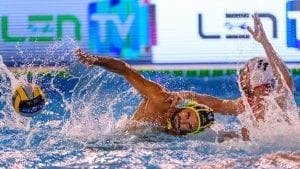 Ferencvaros opened the third “bubble” with a pretty convincing win, but the Hungarians didn’t have an easy task. Hannover proved a tough opponent. Still, Denes Varga, who was out of the team for a while (he didn’t play at the second “bubble” tournament), led his team to an important victory. This was Varga’s third game after a three-month break (he played two games in the Hungarian League last week). 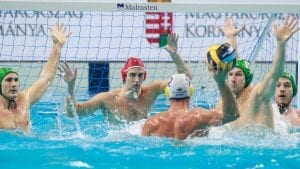 Hannover was a team that dictated the pace in the opening minutes. The Germans led by a goal three times (1:0, 2:1, 3:2). However, Ferencvaros had a slim advantage at the first break (4:3). The hosts increased the margin to three late into the second quarter (6:3) and kept a 3-goal distance until 8:5. Then, the German side started narrowing the difference. Darko Brguljan beat the buzzer, he converted a man-up for 8:9 in the last second of the third period, while Nagaev opened the fourth period to equalize – 9:9 (26th minute). But, the Germans failed to score in the last six minutes, while Ferencvaros produced a 4:0 series (two goals by Varga and two by Vamos) for a solid 13:9 win.

Dinamo earned valuable points in the battle for 4th place in Group B. Jadran still isn’t out of the race for the F8, but the Montenegrins’ chances are slim after today’s loss.
The teams were in a neck-and-neck race until the middle of the second quarter. In the 12th minute, the score was 4:4. But, in the following minutes, Dinamo’s defense was outstanding. Jadran couldn’t find the net for almost 12 minutes. The Georgians scored five consecutive goals and jumped to a 9:4 lead (27th minute). Jadran put a lot of effort into a comeback. The Montenegrins cut the deficit to two (10:12). But their 10th goal came too late – 61 seconds from the end. 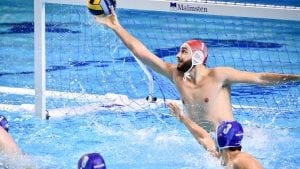 Tomorrow, Hannover and Dinamo will face off in the match that will probably be decisive in the hunt for the last remaining ticket for the F8. Hannover defeated Dinamo in the second “bubble” (9:4), so the Germans need a point to keep 4th place.

Brescia got off to an excellent start. The Italians rushed to a 3:0 lead in the first six minutes. Barceloneta recovered from a shocking opening of the game, and reduced the gap to one (2:3) before the first break. Still, Brescia retook control and stretched the margin to four (7:3) in the 14th minute. Early in the third period, Lazic gave Brescia an 8:4 advantage. After that, Brescia’s blackout period started. Angelos Vlachopoulos scored for 9:6 in the 20th minute, and that was the Italians’ last goal today. Barceloneta consolidated its attack. Just 37 seconds before the last break, the Spaniards equalized for the first time – Mallarach scored with a power-play for 9:9.

The Spanish champion kept its momentum in the final quarter. Barceloneta had many good chances in the opening minutes of the fourth quarter, but Brescia’s Marco Del Lungo posted some nice saves. In the 29th minute, Barceloneta forced a penalty shot. Alvaro Granados sent the ball into the net from the 5m line and put his team in front for the first time. In the remaining three and a half minutes, both teams missed a few chances and Barceloneta won all three points. 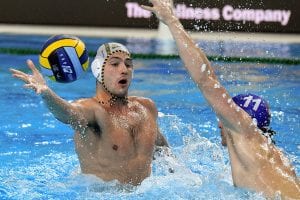 On Wednesday, Barceloneta will play Ferencvaros. If they win in that game, and earn at least a point against Jadran on Thursday, the Spaniards will go to the Final Eight from the 1st place in the group.

Schedule until the end of the Preliminary Stage