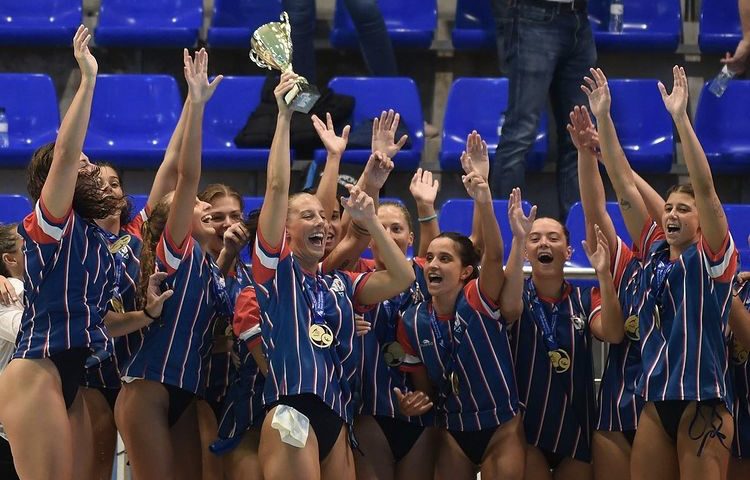 Mataro have won the Spanish Super Cup for the second time in their history with a 10-8 victory over last year’s winners, Sabadell. The Super Cup victory is Dani Ballart’s first title with the club, despite reaching four final’s last season.

Sabadell made a game of it, but they will point to the fact they were missing two of their big acquisitions, Maggie Steffens and Nona Perez, as being the reason why they fell short today. Steffens arrives on Friday, while Perez is away with the U20s in Netanya.

The three goals scored by Sabadell’s Dutch international, Sabrina Van der Sloot – who played well,  was more than matched by Clara Cambray, who was the best player in the pool on the day.

Van der Sloot opened the scoring for Sabadell, but Cambray was quick to respond for Mataro. The Russian, Bella Markoch then made it 2-1 to Mataro off a rebound from a Simone Van der Kraats shot.

While the first period was close, Mataro pulled away in the second with three unanswered goals – the first from an Anni Espar penalty, the second another from Markoch, and the third a goal from the pit that was fired home by Anna Gual.

Van der Sloot was carrying her team and scored another in the second quarter, but it was easy cancelled out by a lovely goal from the MVP of the game, Clara Cambray as the halftime scored was 6-3.

More goals from Cambray and Van der Kraats put the game firmly in the favour of Mataro, but Sabadell made their opponents work for their title. Conversions by Judith Forca and Maica Garcia Godoy pulled the game back to 8-7, but Mataro were too relentless, as Gual put another in from the pit before Cambray sealed her hatrick to put the game beyond doubt.