The last three Olympic medals in Tokyo will be awarded tomorrow after 17:30 (local time) at the Tatsumi Water Polo Centre.

As usual, the last final of the Olympic Games will be the gold-medal match of the male water polo tournament.

Debutant in the Olympic final Greece and reigning champion Serbia will battle for gold.

This generation of the Serbian national team has won everything it could in the past ten years. The team reached its peak a few years ago. Today, they maybe aren’t at the same level they were five years ago. But Serbia is a team that is consistently among the title contenders.

Few could predict that Greece would reach the final. Still, nobody can say that Greece produced a big surprise. Experts, journalists, fans had more-less the same predictions before the tournament. Almost all said that the Tokyo Games would be the most exciting and balanced Olympic water polo tournament ever, and that everything could happen.

Greece and Serbia still haven’t faced off in the final of the major FINA, LEN, or IOC competitions. Serbia debuted on the international stage as an independent country in 2006. On the other side, Greece has played in just one gold-medal match so far. The Greeks lost to the USA in the 1997 FINA World Cup final. 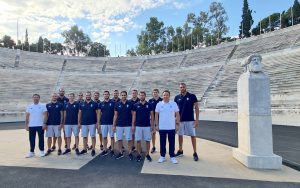 Stats, facts, tradition say: Serbia is a favorite. The Serbs beat the Greeks almost in each of the encounters in the past ten years.

However, stats and facts won’t play tomorrow, but players. Quality, better preparation for the match, motivation, inspiration, and freshness at the end of the tournament are factors that can be decisive.

But both teams certainly want to go all the way – to the gold medal.

The Serbs, the reigning champions, had ups and downs in Tokyo, but it seems that they were saving energy for the most important matches during the group stage. They “exploded” and demolished Italy in the quarterfinals. Yesterday, they were able to come back from three goals down and defeated Spain in the epic battle. 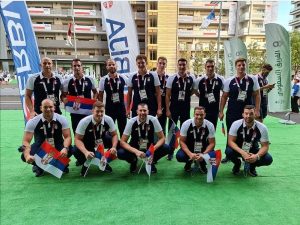 Greece came to the final unbeaten. They played excellently in defense and they dictated the pace in almost every game. The exceptions were the matches against Italy in the group, when they won only a point, although they had a 4-goal lead, and against Japan (10:9). Still, they reached the peak of the form before the knockout round. They were neck-and-neck with Hungary in the semis and broke the European champion in the final quarter.

“We beat Hungary in the semifinals with self-sacrifice, heart, tactics, excellent defenses, great goals and everything that a final needs because the game was a final for us. I have been waiting for years to guide the national team in the final. I’m very grateful and proud that we did this for Greece. We cannot stop here. We have to fight like crazy in the final. We want the gold, to raise the flag high, and to hear our anthem at the end. We will not waste this moment, and we will give our best”, Greek coach Theodoros Vlachos said after the semifinals.

Greece controlled its semifinal from the start until the end. Serbia came back from a three-goal deficit to beat the Spaniards. It was a game with a lot of exclusions. One of the players who finished the match earlier because of the third personal foul was Andrija Prlainovic. After the semis, Prlainovic said:

“It was hard to watch from the bench, but all credit to those who remained in the pool. Congratulations to all the guys, and especially to goalkeeper Bane Mitrovic who saved us. We stayed calm, we believed in ourselves and that is another great victory for us. We are going to the final game with a smile. The Greeks are playing a great tournament. Still, after such a victory against Spain, I believe that the level of play we show will be decisive in the final.”

“The fact that Greece hasn’t beat us in the last few years is irrelevant and means nothing. Nobody is playing the final game to lose. Our opponent has played excellently in Tokyo and we have to do our best”, Serbia’s defender Sava Randjelovic said.

Encounters in the last 10 years

In the last ten years, Greece has beaten Serbia just once. The Greeks trashed Serbia at the 2013 Mediterranean Games – 12:3. But, Serbia played with a junior team, which was preparing for the FINA World U20 Championships. Six players who will battle for gold tomorrow competed at the 2013 Mediterranean Games: Fountoulis, Genidounias, Mourikis, Vlachopoulos, Kolomvos (Greece) and Randjelovic (Serbia).

But, there have been a few exciting encounters between the finalists of the Tokyo Games in the past few years. Serbia and Greece shared the points at the 2016 Olympics. The Greeks had a 4:1 lead at halftime, but the Serbs grabbed a point (9:9). In the 2018 Mediterranean Games final, Serbia defeated Greece after a penalty shootout (12:10). Both teams played with the senior teams at the tournament which didn’t have a usual competition format – there was no knockout round. The group winners (Serbia and Greece) advanced to the final directly.

Their last encounter was at the 2020 European Championship, but it wasn’t an important game. Serbia was better in the semifinals for placed 5th-8th (12:9).

Serbia convincingly beat Greece (9:3) in the game which was decisive for 1st place in a group of the preliminary stage at the 2019 World Championships. That was a pretty surprising result, given Serbia played with a rejuvenated squad, while Greece arrived at the Championships with almost the same team that reached the Olympic final in Tokyo.

Road to the final 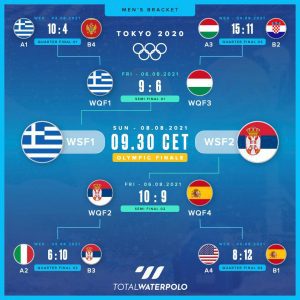 One of the decisive factors in the bronze-medal matches is which team will recover better from a loss in the semifinals.
Spain and Hungary were among the title contenders. Spain played better than Hungary in the past two weeks. The Spaniards kept a perfect record until the semifinals. They suffered a narrow loss to Serbia, but the tiny details decided in that game, as both teams played excellently.

Hungary had some great and bad moments. One of these bad moments was the finish of the semifinal game. The Greeks dictated the pace, but Hungary kept up with them until the middle of the last period. Then Greece secured the win and a medal.

Encounters in the last ten years

Spain has been waiting for a win over Hungary for a long time, since the 2018 World League. But the last five encounters were outstanding and balanced battles. Four of these five games were ended in a draw. The final of the 2020 European Championship was especially exciting. Hungary won its first European title after 21 years in a penalty shootout.

Road to the bronze-medal match

The winner of the 3rd-place game will add second medal for its nation at the Tokyo Olympic water polo tournament (Spain won silver, and Hungary bronze in the female competition).

So far, three times have happened that one nation won medals at both tournaments 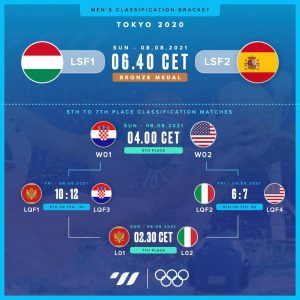