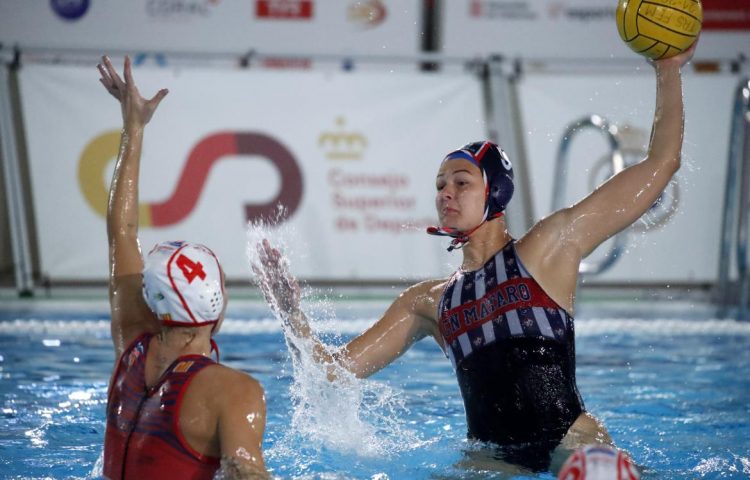 The Semi-Finals of the Women’s Division de Honor were absolutely spectacular this evening as Mediterrani managed to secure a seismic victory over 18-time league champions Sabadell, while it took penalties to separate Mataro and Terrassa, with the home side prevailing 11-10.

It was a potentially historic night for Mediterrani at Can Llong as Maria Diaz’s side secured a deserved but surprising 9-8 win at Sabadell this evening.

The match was really evenly poised, as the scoreline suggests, but Mediterrani hung on when it mattered, and struck the killer blow in the last three minutes of the game.

The American Sarah Lizotte (Mediterrani) was the leading scorer in the match with four of her attempts finding the back of the net. Sabrina Van der Sloot was on target three times for Sabadell in what was a sluggish display on the whole from David Palma’s outfit.

The opening exchanges in the first half were close, and Mediterrani looked like they may pull away for a 7-5 lead in the third, but Lizotte missed a penalty – practically her only mistake in an otherwise flawless performance.

It then looked like Sabadell would inevitably pull away thanks to two Van der Sloot goals either side of the 3rd and 4th quarter break.

However, Mediterrani, who had played well for much of the match, remained committed to the cause, and looked fairly decent in defence.

It was then Carla Vilanova who added the equaliser at 7-7, before Paula Crespi’s goal gave Mediterrani the lead once more.

Crespi was then excluded, prompting a timeout that was fluffed from Sabadell, before the nail in the coffin was handed to David Palma’s team by the former Sabadell player, Clara Espar, who scored with less than an attack left in the match.

The game is a massive confidence boost for Maria Angeles Diaz’s side ahead of the second game in the tie which takes place over the weekend. They know they are one game away from making the finals – a huge achievement for this developing team. No one would ever have given them a sniff at a run at the title, but should they beat Sabadell again, they will be contesting the championship final and attempt to secure a twelfth league title.

For Sabadell, it was a a bit of surprise that they couldn’t find the all-important result – particularly in front of a home crowd, and it doesn’t bode well that they look in a downward spiral after their difficult weekend in Athens in the Euro League. Still, they will go again, and Mediterrani know they need another big result over the weekend to cause a huge upset.

There was a penalty shoot-out in the first Semi-Final between Mataro and Terrassa, as the Dani Ballart’s side secured a spectacular 11-10 victory.

After a deadlocked 4 quarters, 10 penalties followed; 7 of which were converted (Pena, Panicello, Cantero for Terrassa, and Cambray, Van de Kraats Morell and Gual for Mataro) and three that were missed.

The scores were at 7-7 with two minutes to play, and while Terrassa dominated the game and led for most of the match, Mataro equalised in the game, and had the composure to win the contest with penalty scores from Clara Cambray, Van de Kraats, Silvia Morell and Anna Gual

Annie Espar surprisingly missed her penalty for Mataro, however Terrassa’s two best scorers, Paula Leiton and Bea Ortiz, also missed penalties amongst the penalty frenzy, giving Anna Gual the opportunity to win the game – which she did.

Pili Pena proved that age is just a number, as the 36 year old netted a hat-trick for her side, while the majority of goals from Mataro came via braces from Silvia Morell, Simone Van de Kraats and Annie Espar.

Its a big blow for Terrassa to lose the first of a three game series – especially when they played so well for much of the match, leading the first quarter 3-0.

Mataro once again managed to pull out a win from nothing against Terrassa, but they will be confident that they can win the series and qualify for the Play-Off finals with a win over the three game series.

Xavi Perez will once again be disappointed that his side has come a cropper against Mataro in very unfortunate circumstances. But his side is clearly in good shape, and know they are incredibly competitive. The re-match at the weekend will be very interesting.

The next rendition of the Semi-Final’s series continues at 18:00 on Saturday.