The final countdown until the most important match of the Olympic men’s tournament has started.

The semifinal matches will be played tomorrow. Reigning champion Serbia and three returnees to the Olympic semifinals reached the last four. Hungary will play in the semis for the first time after 2008, Greece was waiting to reach the semifinals since 2004. Spain’s previous appearance in the semifinals was in 2000.

Hungary and Greece will face in the first semifinals. Spain and Serbia will battle for the gold-medal match in the last game of the day.

Many would say that it is hard to beat the same opponent twice at the same tournament. Sometimes it proved true. But, there are no favorites and underdogs in the semifinals. All four teams have had some great moments in Tokyo. They all have chances for the final. It’s hard to predict the outcome. After all, the games Hungary-Greece and Spain-Serbia in the group stage were very close contests.

Hungary and Greece haven’t had many encounters at major competitions in the last few years. Their last clash before the Tokyo Olympics was at the 2017 World Championships in Budapest. It was in the semifinals, just like this time. Hungary recorded a 7:5 victory. In the end, Hungary won the silver medal after a loss to Croatia in the final, while Serbia beat Greece in the bronze medal match.

Hungary is the most successful men’s water polo team in Olympic history, with 15 medals (9,3,3). Greece played in the semifinals just once and finished 4th in Athens in 2004. But, Hungary also waited for more than a decade to return to the semis. After three Olympic titles (2000,2004,2008), Hungary was eliminated in the quarterfinals in London and Rio, and finished 5th on both occasions.

The two teams faced off twice at the previous Olympic Games. They shared the points in the group stage (9:9), and Hungary defeated the Greeks in the fifth-place match (12:10) in Rio.

Considering tradition, history, and the individual quality of the players of both teams, Hungary is the favorite here, but the Greeks deserved a spot in the semifinals and it won’t be a surprise if they reach the final game. Greece has achieved better results than Hungary in the competitions held after the long break caused by the pandemic. Greece is the only semifinalist which has already won a medal this season. Greece finished 3rd in the World League. Hungary, Serbia, and Spain didn’t qualify for the World League Super Final.

Superstar Denes Varga, goalkeeper Viktor Nagy, Marton Vamos are leaders of the Hungarian team, which has several excellent young players who will play in Paris, for sure. Two of them are leftie Gergo Zalanki and Krisztian Manhercz, who didn’t play as expected in the group phase, but he “exploded” in the quarterfinals against Croatia, netting seven goals.

Greece also has several superstars. Captain Ioannis Fountoulis, the best scorer of the 2017 World Championships, gained experience in Hungary for two years before returning to Olympiacos this summer. Centre-forward Konstantinos Mourikis is one of the most experienced players in the Tokyo tournament. Konstantinos Genidounias is a nightmare for the defenses of opponents. Genidounias has scored 17 goals in Tokyo. He shares first place in the list of the leading scorers with Krisztian Manhercz, Alvaro Granados (Spain), and Luka Bukic (Croatia). A 24-year-old goalkeeper Emmanouil Zerdevas, Alexandros Papanastasiou, and Konstantinos Gkouvetsis represent a new Greek generation, which won many medals at World and European junior and youth championships in the past years. 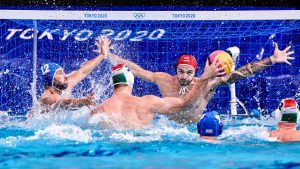 Greece is unbeaten in Tokyo so far. They won nine points in the group stage. Greece defeated Montenegro quite easily in the quarterfinals (10:4), but many exclusions made problems to the Montenegrins in that game. Still, the Greeks deserved the win thanks to their excellent defense and Gendounias, who scored five goals yesterday.

Greece hasn’t advanced to a big final in the 21st century. Is it time to end this bad tradition?

Road to the semifinals 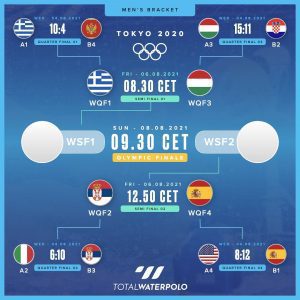 Serbia and Spain have played each other at almost every major competition in the last five years.

At the Rio Olympics, the Serbs struggled to secure a spot in the quarterfinals. They entered the knockout round from the 4th place in the group. Spain unexpectedly won 1st place in another group, so Serbia and Spain met in the quarterfinals. The Serbs recorded a 10:7 victory, and that win opened them a road to the title. In 2017, Serbia defeated Spain in the group at the World Championships (11:5). The two teams played in the gold-medal match at the 2018 European Championship. Serbia won after a penalty shootout (12:10).

Next year, the Spaniards found a recipe for a win over the Serbs. They recorded four consecutive wins in the quarterfinal matches – at the 2019 LEN Europa Cup (13:12), the 2019 World Championships (12:9), the 2020 European Championships (10:9), and in the European qualifications for the World League same year (11:9). As already mentioned, Spain opened the Olympic tournament with a win over Serbia.

But, Serbia was better than Spain (12:10) in the last preparation match before Tokyo.

This semifinal will be a clash of very experienced and one of the youngest teams in Tokyo. Serbia arrived in Tokyo with almost the same team that won gold in Rio. Seven players will say goodbye to the national team after the remaining two matches of the Olympic tournament (Filipovic, D.Pijetlovic, Prlainovic, G.Pijetlovic, Aleksic, B.Mitrovic, S. Mitrovic). Their successors Mandic, Jaksic, Rasovic, Lazic are also high-class players.

On the other side, Spain has rejuvenated the team since the Rio Games. One of the leaders is a 23-year-old Alvaro Granados (who debuted at the Olympics in Rio). Bernat Sanahuja (21), Roger Tahull (24), Alejandro Bustos (24) are some of the key players. The older part of the Spanish roster is headed by captain Felipe Perrone, a 41-year-old goalkeeper Dani Lopez, Francisco Fernandez, Blai Mallarach…  The Spanish team has been growing from year to year. Spain played in three finals in the past three years but won three silver medals (European Championships in 2018 and 2020, and the World Championships in 2019). 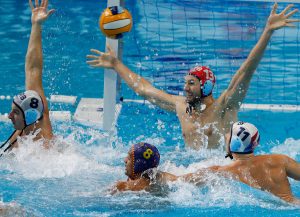 Spain is the only team with a perfect record in Rio – six wins in as many matches. Many thought that the Spaniards would have an easier task in the quarterfinals, but they found it hard to beat the USA. They secured the victory in the last quarter.
Serbia had ups and downs in the group stage, but it played brilliantly in the quarters and demolished Italy. The Olympic champions earned a 9:3 lead in the first half. After that, they saved energy for the semifinals.

Head coaches Savic and Martin probably can’t surprise each other since their teams have faced off many times since 2016. Undoubtedly, both teams will have great motivation. Everything can happen in this duel.

Road to the semifinals 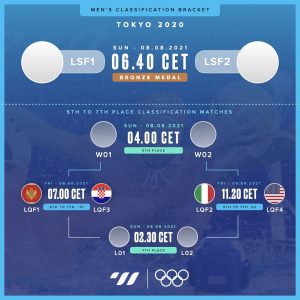