One of the most shocking results in recent day’s water polo: Japan made the semis by beating the group-winner US team and reached the FINA World League Super Final’s semis coming from the 4th place after the prelims.

The Asian heroes will face Hungary, the hosts won a tremendous battle over world champion Croatia, edging out their arch-rivals in a penalty shootout, taking some revenge for last year’s defeat in the 2017 World Championships final. The other two quarters were lop-sided contests, Montenegro beat Kazakhstan with ease while the Spaniards upended Australia in the second half.

It seemed to be an easy task for Montenegro – and they did their job to win the match without any problem. The start is usually important to pave the way in this kind of matches and the Montenegrins didn’t let their rivals think of forcing a bigger fight. After a relatively slow start the favorite side netted three connecting goals in 1:44 minutes, soon it was 5-1 still in the first period, so everything looked to be settled.

The remaining three periods were the same, the Montenegrins dominated the game but not pushed too hard – there are two more games to play, and they could afford to conserve some energy as the Kazakhs looked a bit being worn out in their fourth match in as many days. 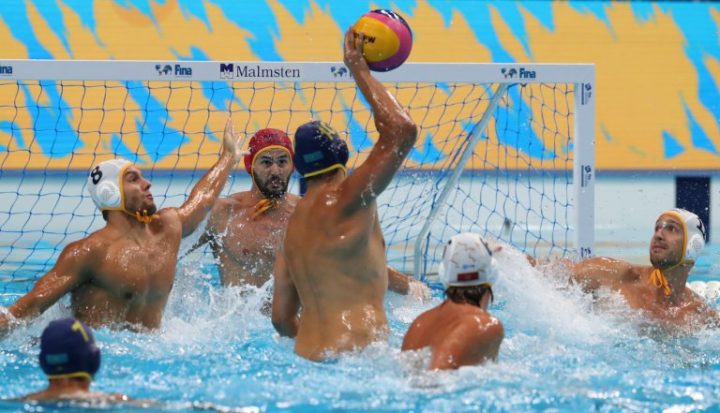 However, the goal of the game – perhaps of the day – came from their side, when Rustam Ukumanov sank under water, chased the goalkeeper who held the ball ready to pass it to start their attack…

Then the shark jumped out of the water, attacked him, stole the ball and put into the empty net – a great move, though was enough to bring the score to 6-3, shortly before the middle break. At halftime, it stood 7-4 but the Montenegrins hit two in 35 seconds for 9-4 before the game would have heated up. The second half mirrored, even more, the difference between reserves and skills: the Montenegrins won these periods 7-2 and secured their place in the semi-finals without any hassle.

The first period was devoted to action goals and missed man-ups. In the first, the Aussies did a better job, two fine shots from the center by Joseph Kayes then Richard Campbell gave them a 2-1 lead as Alberto Munarriz sent a great shot under the cross-bar between the two.

The teams struggled a bit with the extras, both missed two apiece and the Aussies maintained this trend in the second, the last pass was caught by the defenders but Anthony Hrysanthos also made a save in Spain’s next 6 on 5s. However, Roger Tahull could beat him, again from the action (from the center) to make it 2-2 – and Aussies missed their 4th man-up in the dying seconds so they remained scoreless in this quarter.

Hrysanthos opened the third with three saves, including one in a man-down (the teams were 0 for 9 at this stage) but Dani Lopez was equal to him while stopping the outside shots. The man-up misery was halted by Blai Mallarach whose deflected shot found the back of the net in the middle of the third (time-wise it wasn’t a man-up goal either as it hit the net in the 24th second of the possession).

59 seconds later Francisco Fernandez’s fine action shot also sneaked in and in this game, 2-4 seemed to be a commanding lead. Especially if we take into consideration that the Aussies last goal came late in the first – and the third also passed without another one as they missed a 6 on 4 in the closing moments (0 for 6 they stood), so their silence in offense stood at 18:59 minutes.

It went on in the fourth, the 7th 6 on 5 also gone without creating any fine opportunity which also credited the Spanish defense which did a tremendous job. When they netted finally one, by Lachlan Hollis, Spain was already three goals up as Albert Espanol converted a penalty.

Still, despite a drought of 20:57 minutes, Nicholas Brooks scored a minute later, from another man-up so it was 4-5. And they had a possession to go even but couldn’t score again, what’s more, Felipe Perrone escaped for his usual counter, earned a penalty and Espanol delivered again for 4-6.

Soon it was over: another fast counter set up a good chance for Marc Larumbe who made the most of it – in a span of 46 seconds the gap was back to three again (4-7) with 3:06 to go. The Aussies’ bright spell never returned, another missed 6 on 5 here, Alejandro Bustos’ centre-goal there for 4-8, and a buried extra at the end just to show they were able to score one at last – experience and the more effective defensive work (2-7 was the partial result in the second half) made the difference in this match, sending Spain to the semis.

Eleven months after a thrilling gold medal game at the 2017 FINA World Championships in Budapest, the two finalists were back to clash once again, this time in the Duna Arena (and not the Margaret Island), for a place in the semis of the Super Final. The host side looked for a better start than last July when they went 0-4 down in eight minutes and even though they came back to 4-4, the Croats prevailed at the end.

Based on the first period, this they achieved as it stood 1-1. It was a tremendous fight right from the beginning, two man-ups were missed at both ends before the Croats converted their third through Lovre Milos but Gergo Zalanki’s left did the damage again despite being marked heavily. 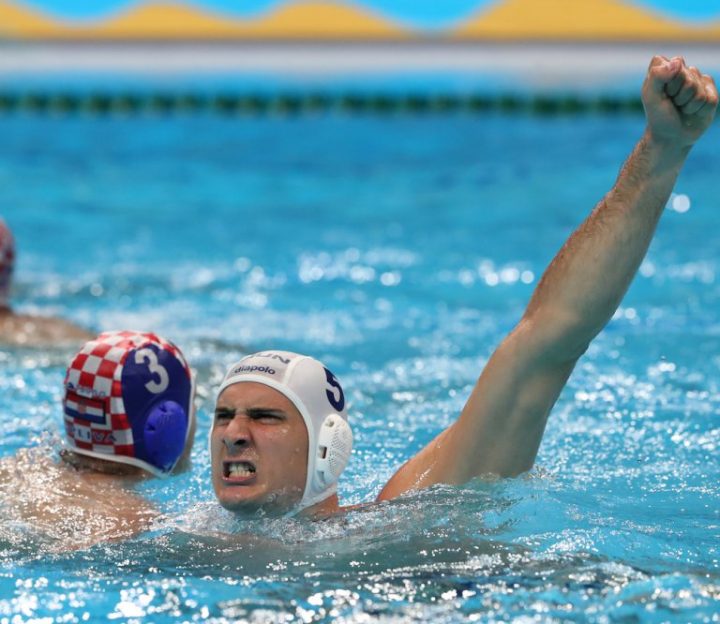 The Croats missed another man-up early in the third but soon Ivan Krapic netted a nice one from the center while the hosts missed a 6 on 4 as Bijac knew guessed the right side at Bence Bathori’s shot. The visitors did a fine job in guarding the center-forward so the Magyars’ attacks weren’t too threatening, while the Croats earned one man-up after the other – though missed all, the third through a 2m line violation.

The post killed the fourth – a bit unusually the world champs stood 1 for 7 already in the second period –, and even though the hosts also missed their next one but the left-handed rocketeers helped, this time Marton Vamos’ blast from action pushed the Hungarians back to even, with 0:47 to go. Viktor Nagy came up with a huge save in the last man-down of the first half to keep the game at level (2-2).

After some massive swimming and a couple of saves from Bijac Hungary drew first blood in the third, from a counter, rather a re-counter Krisztian Bedo netted a 4 on 3, but soon a bad pass from Viktor Nagy set up the Croats for a re-counter and Milos equalized (3-3). The fifth man-up from the Magyars ended in a fine a goal, by Daniel Angyal from close range, and soon they had another opportunity after a time-out to break two goals clear.

Though it was a bit overplayed Zalanki was on target at the (very) end, it stood 5-3 with 3:50 from time in the third. Viktor Nagy denied Javier Garcia with a big save in a man-down. Hungary had two more possession but Mezei was buried in the center while the Croats managed to score from a one-passer 6 on 5 with 0:09 on the clock, to halve their deficit before the last break (5-4).

A bit unusual scene led up the fourth as the center-forward Krisztian Bedo could gain half-meter on his defender and managed to put away the ball from the counter but the replay came immediately, Andro Buslje’s ball bounced in from a blocking hand, it was back-to-back goals for the Croats in extras. Hungary missed their next, Gergo Kovacs hit the crossbar, then Zalanki made some room for a shot but hit the post, still, Nagy delivered a save at the other end.

The fight was enormous in the pool as the players weren’t the freshest on the fourth day. After some lung-testing swimming and stopped shots, Ivica Tucak called for a time-out with 2:48 to go. It worked after all, with some luck as the Croats recovered the ball after two shots, earned a man-up and Vukicevic sent the ball home for 6-6, with 1:33 to go.

After an ‘empty’ possession for the Magyars (they couldn’t score in the last 6:54 minutes), the Croats regained the ball after a controversial corner-shot call, so Hungary had only 3 seconds after their last time-out – thus the game ended in a shootout.

The Croats had a second ‘roulette-play’ in three days after they lost one to Spain on Day 2, while the Hungarians had some bad memories from this kind of outcome as they went down against Montenegro at the Rio Olympics.

Croatia made the first miss in round 3, Xavi Garcia hit the cross-bar, then – while the Magyar shooters were 4/4, Viktor Nagy stopped Loren Fatovic’s shot to send Hungary to the semis while the world champs had to settle for the lower ranks, for the first time in the history of the World League Super Finals.

Arriving with three wins including downing Spain and Croatia, the US team seemed to be the outstanding favorite against Japan which had nothing but defeats in the prelims. However, a quick double from the Asians gave a kind of unexpected opening for the match and soon the Americans found themselves in the middle a dogfight. When they seemed to have overcome their headaches, Japan always found the way to hit back, come back – then to get in the driving seat late in the third and all the way in the fourth.

After going 2-0 down, the US managed to respond with three connecting goals and went for more in the second when they gained a two-goal advantage at 3-5. The Japanese came back for the first time, netting two in 58 seconds and held on for 6-6 until halftime. 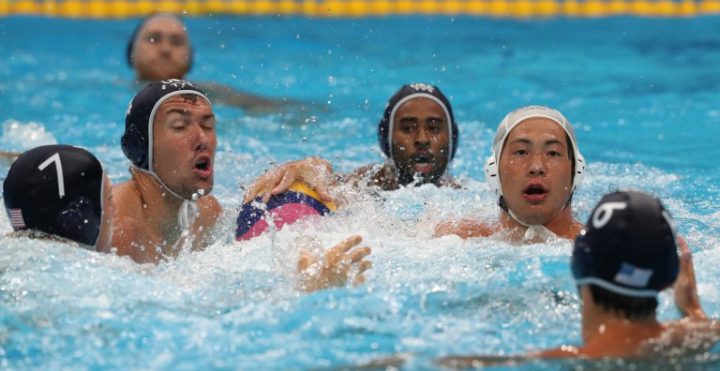 The US needed three man-ups to score once while the Japanese made their 6 on 5 for 7-7, then Tanamura Katsuyuki posted a huge save in a man-down. Though Japan also missed a man-up but with 0:29sec to go in the third, luck took their side as Araki Kenta could push in a rebound in an extra and Japan led once more (8-7).

And the writing was on the wall for the US as the fourth began with a similarly fortunate goal for Japan, again, they could put away their 6 on 5 after the ball fell into the hand of Koppu Harukiirario from the cross-bar and he sent it back to the net for a 9-7 lead.

An exclusion-penalty combo helped the Americans to come closer, then they had a fine opportunity from the center but Tanamura stopped the shot and from the ensuing counter Arai Atsushi reset the two-goal gap with 5:33 to go.

The US boys tried to gear up once more, tightened their muscles and in 51 seconds leveled the score, first Bowen sent the ball home from a dying man-up then Benjamin Hallock netted a 5m free-throw, so it stood 10-all with exactly four minutes remaining.

A relatively long time but only one goal was scored, again by the Japanese. They were third time lucky, really: after two more great saves from Tanamura, Adachi Seya let the ball fly from a man-up and it got a deflection on a blocking hand, enough to beat the substitute goalie somehow.

The US had 1:49min to force at least the shootout and they had a couple of great chances but their players simply missed the goal. Hallock could launch one from the center, it went wide, with 0:22 remaining Bowen could fire from an extra but it went high and the Japanese could celebrate a stunning win and their best ever performance in major FINA events.