Montenegro and the USA are the only two sides in the field standing with a clean sheet. The Montenegrins had a big win over host Hungary, coming from 7-9 down to clinch the match with 12-9 while the Americans beat Kazakhstan with ease.

Spain recovered from the opening day’s defeat against the US and managed to beat world champions Croatia in a penalty shootout. Australia did a splendid job against Japan, thanks to the outstanding efforts of Aaron Younger who netted 6 goals.

While the Hungarians were able to mark the Aussie super-player Aaron Younger quite effectively on Day 1 (they had the advantage to get to know him in the last eight years as he had been playing in Hungary since 2010), the Japanese couldn’t stop him for a single moment. Younger has become one of the most versatile players with outstanding swimming speed, brilliant skills, and great muscle power – and he just gave some appetizer from his outstanding knowledge.

Well, it was more than just an appetizer, as a starter, he ‘served’ three goals in the first period, all from the action, from different situations but he just outpowered his defender on each occasion. He was the difference in the first eight minutes as the Aussies took a commanding 4-1 lead. 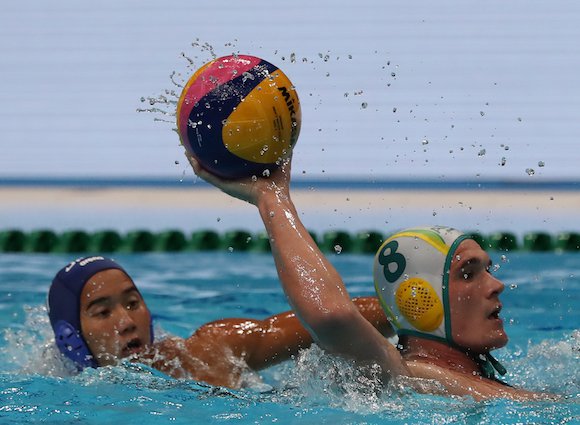 Soon the ‘main dish’ arrived as well as Younger came up with three more goals till the end of the third period. At the same time Japan struggled a bit to find the ways of scoring – the Aussies, especially Younger, could create opportunities more easily. Even though they had more shots on target (19-22), but most of those shots weren’t as powerful as their rivals’ ones. So the side from Down Under kept a safe distance after the first period, the Asians couldn’t get any closer than three goals.

They were 10-4 down early in the fourth, then netted three in succession but that didn’t change the face of the match – Australia made its first win while Japan is yet to earn a point and facing Hungary on the following day they seem to be set to finish on the bottom place of the group.

Fans couldn’t complain on the opening period as it was really packed with action: seven goals were netted, the Croats had the better start and took a 4-3 lead. Then came a blackout from the world champions in the second, Spain scored three straight goals in a span of 2:09 minutes for a 4-6 lead, Croatia could add one after a ‘silence’ lasting 7:30 minutes. However, a fine extra men shot from Roger Tahull gave Spain a two-goal lead by halftime.

Xavi Garcia converted a second penalty against his former country but the other leftie, Blai Mallarach buried a 6 on 5 to maintain the two-goal gap. The scenario was repeated a bit later, this time Felipe Perrone scored from a brilliant counter, and it was also scored by his left, all credits went home as he is right-handed. But the ‘normal’ leftie, Garcia halved the Croatian deficit before the last break (8-9).

Croatia is currently playing without two of their very valuable players — Jokovic and Loncar.

Spain slowed down the pace for the last period, they were waiting for the opportunities or the Croatians’ mistakes but none of those came – they missed a man-up early in the fourth, just as their opponent a bit later. Then, with just 1:07 remaining on the clock, the Croats managed to set up a fine 6 on 5 and Andro Buslje made a kind of slam-dunk shot from centimeters and that was enough to force the shootout.

However, they earned just one point as Dani Lopez made two catches, as first he stopped Garcia’s shot – during the game the former Spanish netted two penalties, this time he missed, just as Ante Vukicevic while the Spanish converted all four and earned two points, a fine recovery after their defeat against the US on an opening day.

“It was a tough match. We’re in the preparatory state of mind and our tiredness was easy to spot. We came to this tournament to go all the way to the end, and this match doesn’t change anything. Tomorrow is the match against the USA.”

The two sides produced a great match with a lot of great goals, twists, and excitements in front of 3,000 enthusiastic spectators but the local fans left the Duna Arena without smiles on their faces as the Montenegrins upended the host side with a fine finish.

Hungary took the lead twice in the opening period but the Montenegrins hit back and earned a 3-2 advantage by the end of this quarter. The second offered everything water polo is loved for, a series of magnificent shots, nicely played man-ups, huge blasts.

Montenegro held on until 5-4 but then the Magyars enjoyed a better spell and with two fine action goals in 35 seconds – especially Tamas Mezei’s effort from the center stood out as he beat the defender and the goalie while sending the ball to the empty net – put the hosts ahead. And they kept that until the middle break as Mladan Janovic’s rocket from a 5m shot was followed by Tamas Vamos’ penalty 41 seconds from the time (6-7). 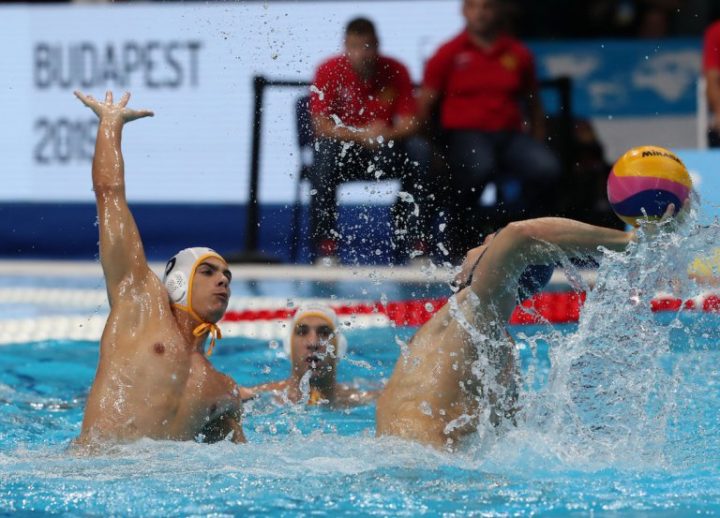 Gergo Zalanki was on target early in the third to double Hungary’s lead but Drasko Brguljan buried an extra nicely. Krisztian Manhercz converted a 6 on 4 for 7-9 – the fans loved what they saw, none of them would have thought that this was the last goal of their beloved ones.

It happened: Montenegro netted back-to-back man-ups in a span 1:40 minutes, the last one came just 0:09sec from time so the last period started from 9-9. And it was all about the Montenegrins who scored from another man-up – they netted 7, quite a feat – while the Magyars were unable to send the ball behind Dejan Lazovic. Indeed, they seemed to run out of gas a bit, something unusual from a Hungarian side, their shots lacked precision while Mladan Janovic even scored from a 5m shot when Montenegro attacked 5 on 6 as Aleksandar Ivovic stayed in the back to look for some oxygen amidst the huge battle.

It was him, however, who sealed Montenegro’s win with a shot from the distance which luckily bounced from a blocking hand – Hungary missed its third man-up in the last period so they remained scoreless in the last 10:54 minutes of the match – during that phase their rivals came up with a 5-0 rush which won them the match.

After five minutes of battling the US could finally open the scoring, converting their third man-up and soon added another one, again from a 6 on 5 for 2-0. The Kazakhs missed their only extra soon and needed 12:04 minutes to get on the scoreboard. 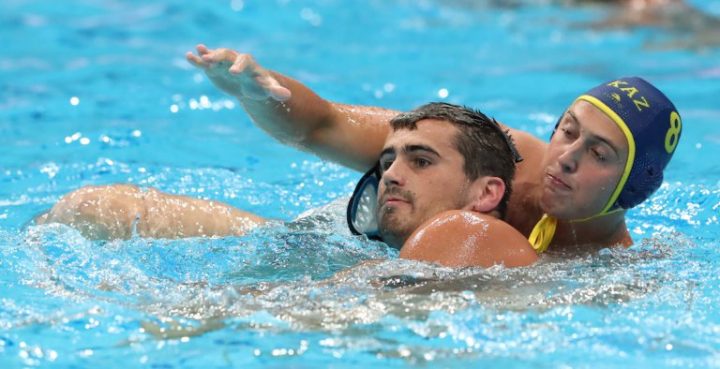 By then the US were 3-0 up but the Asians found some rhythm and soon it stood 3-2 and had a chance to go even but a steal Luca Cupido ended it and Benjamin Hallock’s fine action goal put the Americans back on track. Alex Roelse put away a man-up 46 seconds before the big break, comforting his team by halftime (5-2).

For a while, the result was frozen in the third, missed man-ups, including a 6 on 4s apiece, followed in succession, then the US stroke again. They netted three late in this quarter in a span of 1:43 minutes and going 8-2 up virtually decided the outcome. The last period brought some unnecessary tensions and toughness especially from the Kazakhs’ side, this time they finished the game with 19 major fouls, one less than on Day 1, but it didn’t prevent the Americans from winning with ease and claiming their second win in as many matches.