Mladost and Jug advanced to the final after relatively easy wins in the semifinals.

This was the third consecutive encounter between Jug and Mladost in the Croatian Cup finals. Two seasons ago, Jug won 8:6. Mladost was better in the last season (16:12), and managed to repeat that success today. The Zagreb based team trailed by three goals early in the third quarter but managed to come back and retain the trophy

Mladost has won 10 trophies in the national Cup, but Jug remains the record holder because it has 14 Croatian Cups in its treasury.

The final was an exciting match, with a few twists and turns. Jug managed to stop Mladost’s best scorer Luka Bukic, who didn’t found the net today, but a young Russian Kharkov was unstoppable. He scored seven goals, with an excellent percentage of shots (7/10). Lovre Milos added four. As usual, Loren Fatovic was the best scorer in Jug, with three goals. One of the heroes was Jerko Jurlina, Mladost’s second goalkeeper, who replaced an experienced Ivan Marcelic before the second half. Jurlina posted 10 saves in the third and fourth quarter. 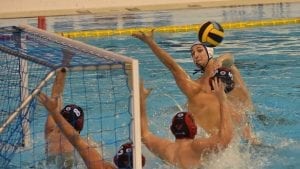 Mladost got off to a good start, and earned a two-goal lead in the 7th minute(4:2). Still, Paolo Obradovic beat the buzzer and found the net in the last second of 1st period for 3:4, and Papanastasiou equalized in Jug’s first possession in the 2nd quarter(4:4). Jug caught up with the rival once more (5:5), but in the 12th minute, Mladost regained a 2-goal lead (7:5). After that, Jug took control. The Dubrovnik-based side leveled the score (7:7) two and a half minutes before the middle break. Shortly after, Loren Fatovic gave Jug the first lead (8:7). But that wasn’t the end of the series. Early in the third period, Jug earned a three-goal lead 10:7.

Mladost’s goalless phase lasted for eight minutes. The Zagreb team started coming back in the middle of the third period when Kharkov converted a man-up for 8:10 and broke Jug’s 5:0 series. Still, Jug entered the fourth quarter with a slim advantage (11:10).

Lovre Milos opened the final quarter with an action goal for 11:11. Jug’s captain Xavi Garcia replied immediately with an extra player goal.
But, then started the crucial phase of the match. Mladost produced a 3:0 rush in 2:09 minutes and went in front – 14:12.

After a few missed chances on both sides of the pool and Jurlina’s saves, Hrvoje Benic gave Jug the last hope with an action goal for 13:14. That happened two minutes before the end. But, Konstantin Kharkov found the net with 55 seconds to go, and doubled Mladost’s advantage (15:13). After that, Jug couldn’t come back.

More news about  the national water polo competitions in Croatia, Serbia, and Montenegro