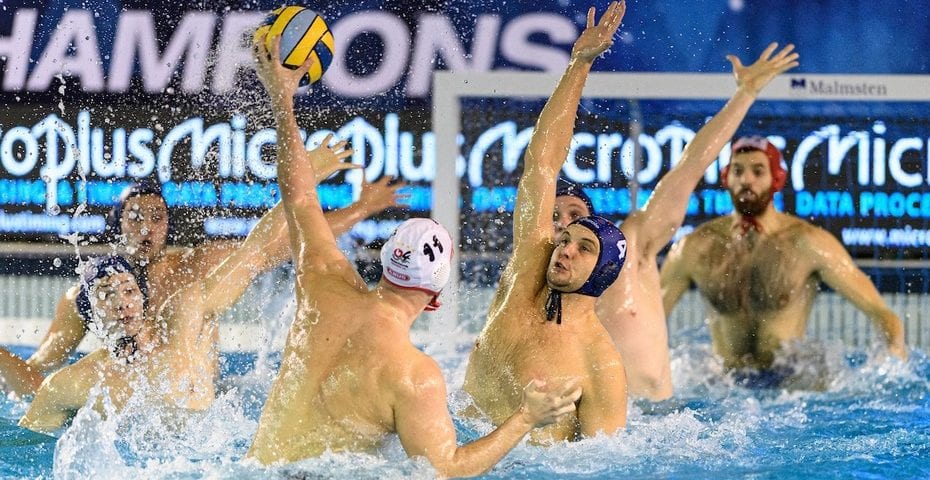 Jug Dubrovnik defeated Marseille narrowly (11:10) in the derby of the Champions League Day 2, played in Group A in Ostia.

This match wasn’t so thrilling as yesterday’s encounter between Pro Recco and Marseille (Recco won 11:9). Jug led almost during the whole game. Still, Marseille was very close to a comeback after the poor first half. The French are pointless after two rounds. But their performances in the games against Pro Recco and Jug is proof that they can fight equal battles with the best European teams.

There were no surprises in the other matches. Pro Recco struggled against Ortigia in the Italian derby but recorded a nice win. Olympiacos beat Spandau 04.

The first games were played in Group B in the Duna Arena in Budapest. All favorites recorded convincing wins.

Jug dominated the first half, and that was crucial. Marseille scored the first goal in the match – Andrija Prlainovic sent the ball into the net from a penalty. But, Jug took control shortly after and jumped to a 4:1 lead. The second period was similar to the first one. Prlainovic opened the quarter with another goal from a penalty. However, Jug didn’t let the French come back, and it had an 8:3 advantage at halftime.

After the first half, many thought that Marseille water polo players were tired after an outstanding performance against Pro Recco yesterday, and that Jug would achieve a convincing victory.
However, the 2019 LEN Euro Cup winners managed to organize themselves during the middle break. They scored three goals in a row to reduce the gap to 6:8. Jug made many mistakes in offensive play, and that, in combination with good saves by Marseille’s goalie Dejan Lazovic, resulted that Jug its first goal in the second half scored 36 seconds before the final break – Tomasovic for 9:6.

Loren Fatovic converted a man-up into a 10:7 lead in the 28th minute, but the drama wasn’t ended yet. Marseille’s center-forwards Camarasa and Spain scored two goals within 47 seconds, and the distance between the teams was just a goal (9:10) with 01:35 minutes to go. But, immediately after Marseille’s 9th goal, Luka Loncar, the best player of the game (scored 2 goals and forced many exclusions), netted for 11:9, and it was clear that the French couldn’t come back. Four seconds before the end, Ugo Crousillat scored a consolation goal, which might be important for the goal-difference at the end of the group stage.

After the match and before a new derby (against Olympiacos), Vjekoslav Kobescak, Jug coach, said:

“It was a good match. Apart from the very beginning, we took control of the game and closed it down even if they did come close at the end. They are a very good mix of players, they swim a lot. Tomorrow is going to be a different type of game I think since Olympiacos has two very good center-forwards. We would like to close the tournament with a third win.”

“I would like to congratulate Jug. They did exactly what they are known for, with routine and experience. It is not easy to find answers for that. However, we managed to regroup ourselves and come back, but it was too late. All in all I’m satisfied, though I have to be modest and realistic. It’s never good to lose but our approach is the right one I think when playing against the greats of water polo. It takes time to grow. Tomorrow we finally face an opponent of the same level as ours and are going for a win.”

Spandau stunned Olympiacos with an opening 2:0 lead. The Greeks didn’t wait too long to start coming back. They equalized in the last second of the first quarter (Genidounias scored from an extra). The winner was decided during the second period. Olympiacos built an 8:4 lead before the middle break. Deep into the third quarter, the Greeks stretched the margin to five (10:5), but persistent players of Spandau didn’t give in and cut the deficit in the third minute of the fourth period (8:10). Still, Olympiacos went 12:8 up in the 30th minute, when Stylianos Argyropoulos scored from a counter-attack and secured the three points for his team. Laszlo Baksa, Spandau’s goalkeeper, was excluded (with substitution) after that goal, because of protest (he signaled that Argyropoulos pushed the ball underwater).

Ortigia started better and was leading three times by a goal (1:0, 2:1, 3:2), but Recco managed to equalize on each occasion. Aleksandar Ivovic put Recco in front for the first time, with a goal from a counter-attack for 4:3, just 23 seconds before the middle break.

It seemed that Recco players took the match into their hands. At the start of the second half, Tomaso Negri replaced Marko Bijac in front of Recco’s goal. The Italian champion built a 2-goal lead in the third period (5:3, 6:4). After Mandic converted the man-up for 6:4, Recco players had a great chance to earn a 3-goal advantage, but they lost the ball, and they paid for it. Vidovic and Giacoppo leveled the score (6:6) in the middle of the quarter. Figari gave Recco a 7:6 lead, but Gallo responded with a new equalizer (7:7). It turned out that was Ortigia’s last goal in the match. After that, Bijac returned to the water and didn’t concede a goal until the end. By the end of the quarter, Figari scored with an extra player for 8:7. In the fourth period, Recco missed a few good chances, while Ortigia couldn’t find the right solution in front of Recco’s goal. Aaron Younger hit the back of the net for 9:7 with four minutes remaining. In the 31st minute, Francesco di Fulvio scored from a penalty – 10:7, and that was the end of the hard battle.

Brescia needed some time to find its rhythm. The Italians led 2:0 in the middle of the first quarter, but Dinamo responded with four unanswered goals and earned a 4:2 lead. The Georgian side maintained a 2-goal distance until the 11th minute (5:3). Brescia dominated in the following ten minutes. The Italians produced a 7:0 rush and jumped to a safe 10:5 lead midway through the third period. Dinamo couldn’t come back.

Brescia head coach Alessandro Bovo didn’t lead the team today, because of a suspension. He was excluded in the final match of the Group B of the qualifications in Budapest in November. Edvin Calderara replaced Bovo.

A rejuvenated team of Jadran Herceg Novi couldn’t make problems to the European champion. Ferencvaros earned an 8:0 lead before Jadran finally found the net 36 seconds before the end of the third quarter. 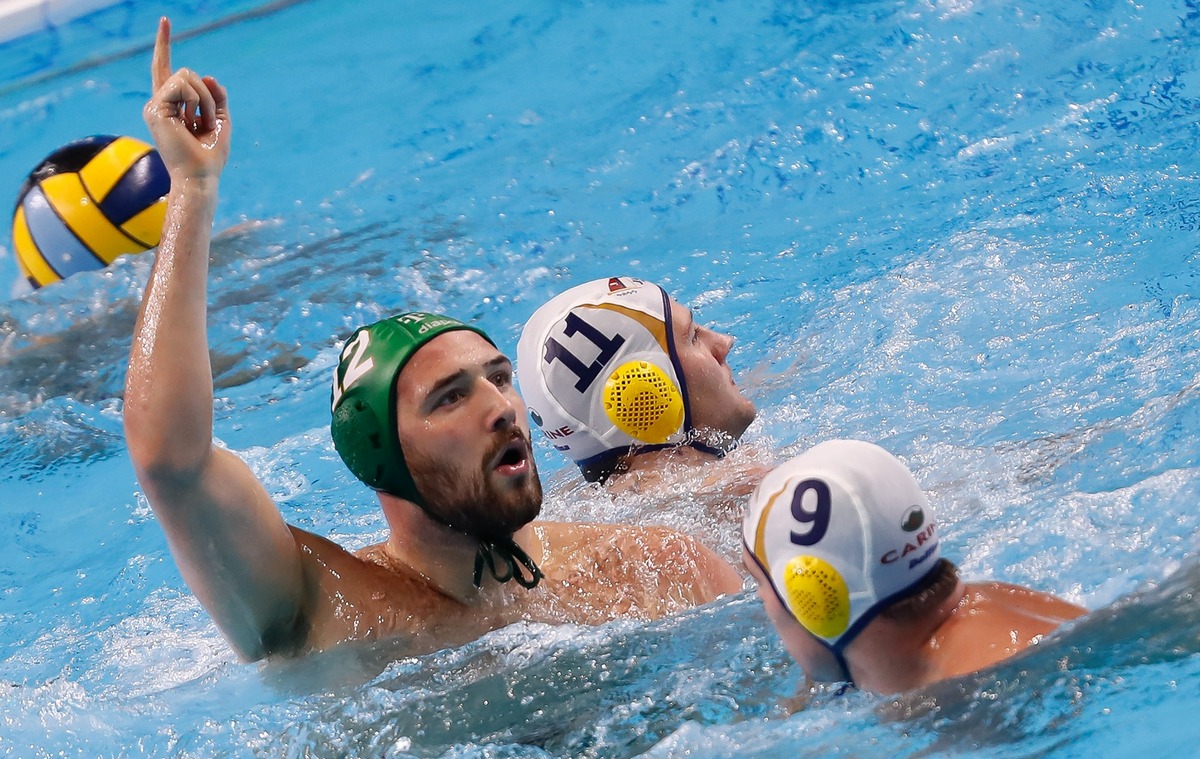 Barceloneta got off to a flying start and earned a 3:0 lead quickly. But, Waspo didn’t surrender easily. The German side caught up to the Spaniards before the end of the quarter (3:3).

Barceloneta opened the second quarter in the same way as the first period. Led by Alberto Munarriz, the 2014 European champion scored three straight goals for 6:3. Hannover captain Aleksandar Radovic scored for 4:6 (the goal was confirmed after a VAR review). However, Granados and Larumbe doubled Barceloneta’s advantage (8:4). Shutze’s goal eight seconds before the middle break (5:8) raised the Germans’ hopes. But Hannover, which didn’t play a single official match in the past two months and a half, couldn’t keep the pace dictated by the Catalan club in the second half.