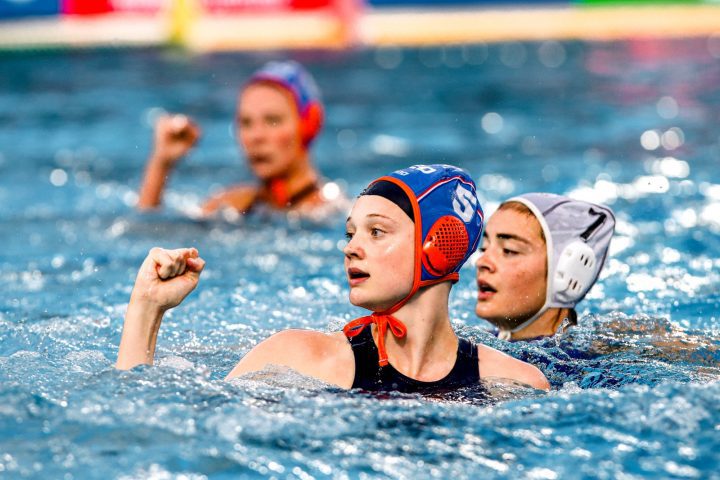 The Netherlands played with great confidence against Greece at Alfred Hajos this evening, running out 12-7 winners.

The Dutch proved too good for the Greeks tonight, showing too much quality in going forward, and too much strength in defence. They will now play Hungary in the Semi-Finals.

Lola Moolhuijzen continues to dazzle spectators of the World Championships, with another four goals to her tournament haul. Eleftheria Plevritou was a redeeming feature for the Greeks,  even if she practically only played half a game having received two exclusions within the first quarter.

The Netherlands had a better first quarter, despite the fact that Greece took the lead. It was Margarita Plevritou who had space on the right, and executed a wonderful lob that left Laura Aarts in the Dutch goal rooted to her spot.

But from then onwards, the Dutch dominated the possession, and created all the meaningful chances. Vivian Sevenich turned well in the pit to equalize, before Kitty Joustra flicked the ball home at centre forward past Ioanna Stamatopoulou.  Sabrina Van der Sloot then scored with a tasty lob from a far left position to give her side a 3-1 lead at the break.

Into the second period, the Dutch had a three goal lead thanks to a really well taken low driving shot from Lola Moolhuijzen. On the left, she had no option but to shoot, and her choice payed dividends for the Oranges.

Alexia Kammenou needed Eleftheria Plevritou, who received two exclusions in the first period, back in the pool. And when she got back in, her presence was felt immediately, with an outstanding shot from range that gave Laura Aarts no chance. Plevritou added another goal later in the quarter, but the Dutch continued to make progress with a well-crafted extra player goal from Bente Rogge. At the end of the half, Lola Moolhuijzen scored another goal from a 5m penalty, showing her diverse range of goal-scoring ability.

For much of the third quarter Greece were in control, but didn’t make anything count on the scoreboard. In fact, it was the Dutch that added to their lead, and it was, yet again, Lola Moolhuijzen with a perfect lob from the right – something we are becoming very accustomed to.

Maria Patra netted twice for the Greeks in hope that it would spark some sort of impact amongst her team mates, but finishes from Sevenich and Sleeking maintained the three goal Dutch lead.

But the Dutch defended expertly, and conversions from Rogge and Moolhuijzen put the game beyond Alexia Kammenou’s side.

Sabrina Van der Sloot (Netherlands) – “In the beginning we a little bit nervous, but we picked up very soon and we took the lead. I think we have more quality in our team, we are the better team and we showed it.

Lola Moolhuijzen (Netherlands) – “I feel great. I am really happy that we are into the Semi-finals. It was a really hard game, it didn’t seem like it because of the score, but you have to keep holding onto the extra goals that you have. I am really proud of the team. We still have two more important games, so I hope I can keep my performances up

Eva Doudesis (Netherlands) – “I am satisfied about the performance, in defence, but also in the way we attacked. I think we can play better, but it was a good step towards the next challenges. We were stable and made good choice in defence, which was the key. It will be an honour to play either Hungary or Australia.