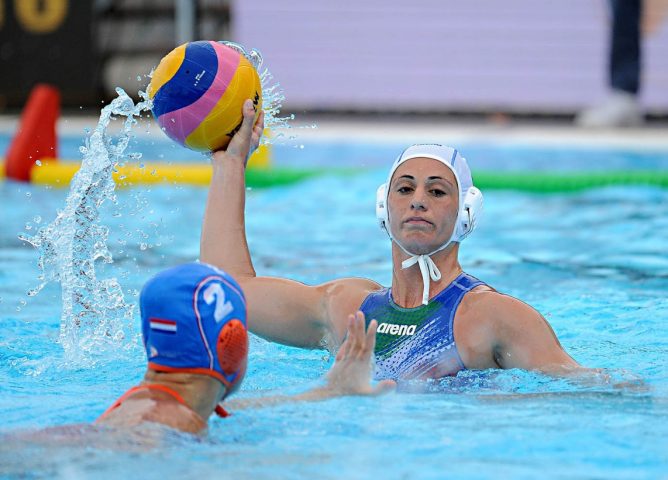 The Netherlands beat Italy today in the first game of the day, as the game was separated by the finest of margins, and some outstanding quality from the Dutch when it mattered.

The Dutch will now face the winner of Spain and Hungary, while Italy will await the loser of that match – to be played later.

For much of the game, the result was on a knife-edge, however, important scores from Van de Kraats, Moolhuijzen and Ten Broek in the last made all the difference for Eva Doudesis.

Ekipe Orizzonte’s Claudia Marletta put four goals away, albeit it half were from the penalty spot. For the Dutch, Sabrina Van der Sloot was the main scorer with three goals – two of which were in the second half.

The way the Italians play always relies on the fine margins going their way, and they looked to be comfortable in the game when the Dutch were producing very little. However, when the Oranges stepped up their game, the Italians couldn’t match the quality finishing of that of the Dutch.

Carlo Silipo will obviously be disappointed to lose such a game, and realistically the Netherlands are the Italian’s direct rivals with the same aspirations, but the Italy will be grateful for the run out, and will go again tomorrow.

The opening exchanges of the first quarter were cagey, as it almost felt like both sides were feeling each other out. The Dutch had a few openings but were hesitant to take the chance. Italy looked decent going forward, while the Dutch only carried a threat on the counter or extra-player situations.

The first real bit of quality in the game saw Italy receive a penalty, as Valeria Palmieri turned well at centre, drawing the foul from Nina Ten Broek, and Claudia Marletta converted for the Setterosa.

It was then 2-0 to the Italians with a carefully executed Sofia Giustini lob on the left, although the goal was initially not awarded, and only given a minute later after a VAR review. The review showed that the ball did in fact cross the line, something that seemed obvious in real time, but the line judge missed.

The Dutch eventually got their first score of the game via Bente Rogge. Agnese Cocchiere was excluded, and while Caterina Banchelli kept the initial shot out well, the Italians failed to clear their lines, and Rogge’s shot alluded Banchelli in the Italian goal.

If the Oranges were sluggish in the first period, they started the second with real intent. Sabrina Van der Sloot had her shot well saved , while Brigitte Sleeking’s first shot of the quarter was whiskers away from giving the Dutch the lead.

But, Italy held on, and took their chance when it came their way. Bente Rogge was dismissed for 20, and Claudia Marletta grabbed her second of the match with a sharp shot from the perimeter.

Sabrina Van de Sloot gave her side parity once more with a well taken penalty as the Dutch started the make the game work for them. Domi Picozzi was caught the wrong side of Simone Van de Kraats, who earned the opportunity well for her side.

The Italians were now seeming to find it difficult to move the ball quickly with any conviction towards the end of the 2nd period, with their only big chance coming from a Claudia Marletta shot on the left that was easily dealt with by Laura Aarts. The Dutch didn’t look that much more likely to score, with a Bente Rogge attempt the only real chance of note from the left-wing before the end of the half for the Dutch.

However, with just 1.3 seconds to go, Laura Aarts slipped up to give Italy a 4-3 lead at half-time. Ekipe Orizzonte’s Guilia Viacava took a very half-hearted shot from an extremely tight angle, however, the power seemed to throw off the experienced Dutch keeper, who could only parry the ball into her own net.

The half-time break was much needed for both teams – both looked out of sync going forward, and perhaps a point more relevant to the Italians rather than the Dutch was to cut out the ill-discipline of giving away too many exclusions.

Early in the third, both sides hit the woodwork; Roberta Biaconi’s shot for the Italians beat Aarts but not the post, while Ilse Koolhaas’s effort could only hit the crossbar.

The Dutch, however, did score first in the third period for 4-4. The centre-forwards had been used sparingly in the match, partly due to the defensive work of both sides. But when Bente Rogge put a lovely ball into the pit, the powerful Vivian Sevenich fired home a well-placed backshot to level the game up.

Following the trend of the match, the two sides cancelled each other out for the next few minutes. Neither had a really clear sight on goal, and neither side showed that much quality.

That all changed when Simone Van de Kraats took matters into her own hands with a minute on the clock. She was sat on 6m, with three blockers, but still managed to pick out an unbelievable shot that beat all the blocks, and the keeper. World-class players change games, and Van de Kraats had given her side the lead for the first time in the match at the end of the third.

And quality was the name of the game as we entered the fourth period. Nina Ten Broek, who plays her water polo in Spain, put away a scintillating chip off the post within the first attack of the quarter for 6-4 to the Netherlands.

Then, as if to copy her teammate, Lola Moolhuijzen, who had been quiet for much of the game, then burst to life with an equally beautiful lob. On the left, Moolhuijzen lofted the ball to the back post, and the flight of the ball dropped into the back of the net, to give the Dutch some breathing space (7-4).

The life was really sucked from the Italians after those two lobs, and they needed to recover quickly if they were to win this game. Fortunately for Carlo Silipo’s Setterosa, Nina Ten Broek gave them a way back (via a 5m penalty) after a mix-up at the back, and Claudia Marletta was reliable from the spot for her hat-trick.

But another bit of great play from the Dutch put them back ahead by three goals; Moolhuijzen was on the left-wing with the ball, picked out a clever lofted pass with the flick of her wrist and found Sabrina Van der Sloot on 2m – who could hardly miss for her second of the game.

And Van der Sloot made it a hat-trick just under a minute later and secured the game for the Dutch, as the Sabadell utility player found herself on the right perimeter, and rifled a shot home, with the power beating the Italian keeper.

Italy did get two goals late in the match thanks to a no-look shot from the top by Claudia Marletta, and a good finish by Giulia Emmolo. But the result belonged to the Dutch, who had the quality in the game when it mattered.