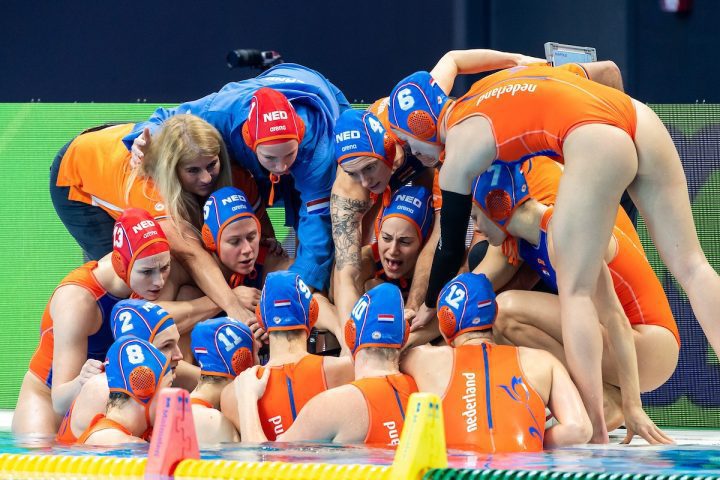 The Netherlands ran out big winners at home against Greece in a very mature performance for the hosts tonight in Rotterdam. In front of a supportive home crowd, Eva Doudesis secured his first win as Head Coach, as Van de Kraats secured a hat-trick with braces for Sleeking, Van der Sloot and a maiden duo of goals for Lola Moolhuijzen.

For Greece, they never really clicked in attack. They had some decent chances, but were without any real conviction going forward. Maria Myriokefalitaki was working hard at centre, and Eleftheria Plevritou had a decent game with three goals, but the Greeks were well beaten today.

There was a lively atmosphere in Sportbedrijf Swimming Pool in Rotterdam before the start of the game, and that definitely spilt over into the pool at least for the first quarter.

The game was level for the first 8 minutes, but the Dutch were fantastic going forward in the second period, converting key opportunities to swing the momentum in their favour.

The pace of the game slowed massively in the third – but that was fine for Eva Doudesis’s side, given their lead in the match.  They defended well when needed against a largely sluggish and ineffective Greek offense.

The Greeks didn’t improve in the last, and while the Dutch were not great either in the last moments, they didn’t need to be.

The win for the Dutch was needed. They are now level on points with Hungary and Greece (3pts), with each team playing two games.

Van der Sloot won the first swim, immediately making a chance for the Dutch, as they fed the pit and won the penalty. Simone Van de Kraats stepped up and inevitably slotted home to give her side the lead.

Immediately after, the Dutch repeated the same move, feeding the strong and dominant Vivian Sevenich, who was unlucky not to win a second penalty.

However Greece equalised through Vasiliki Plevritou, who found space on position 4, and rifled the ball past Laura Aarts for 1-1.

The Dutch equalised immediately though, as Brigitte Sleeking’s shot somehow squirmed past the Greek keeper. The Netherlands then extended their lead through their skipper with 5 minutes to go, as the side in Orange were patient on the man-up, and Sabrina Van der Sloot’s cross-cage shot was good enough to beat the keeper.

The Dutch had all the momentum, and Simone Van de Kraats made it two for her tally, and 4-1 for her side, as the player for Mataro had a shot on the right that once more dribbled over the Greek goal line.

However, when Nina Ten Broek was excluded, Eleftheria Plevritou was afforded too much time on the right-hand side, and punished the Dutch with a driven shot that Laura Arts could only divert into her own net.

Greece had a great chance with three minutes left in the quarter when Maria Myriokefalitaki pivoted on 2m, but Laura Aarts made a fantastic acrobatic, close-range save to deny the young Greek centre-forward. Aarts then denied another Maria (Patras), as the Olympiacos player picked her corner from the top of the perimeter.

At the end of the first, the Dutch led by 4 goals to 2. They had been more clinical in attack, finding the pit with ease at times, and gaining the extra-player situations to score more frequently than the Greeks.

The second quarter was a cagier affair to begin with, with missed chances for both sides in the opening three minutes. But it was eventually the Greeks who scored first, with Eleftheria Plevritou grabbing her second of the game.

However, no sooner had the Greeks pulled within one, the Dutch restored their two goal lead. It was Bente Rogge, to rifle a ball into the bottom right-hand corner of Kotsioni’s net.

But Eirini Ninou, who was drafted in last minute to replace Tricha, found the back of the net with a classy cross-cage finish from the left to put Greece back within one.

Nina Ten Broek did put the ball in the back of the net moments later, but the referee correctly disallowed the goal, for shooting inside two.

However, the Dutch were in no mood to let Greece back into the game. Firstly, Brigitte Sleeking have the Oranges their two goal cushion again when she found herself alone on the right, and beautifully placed a shot into the top-left of the Greek net, before Iris Wolves, who is currently playing for Mediterrani in Spain, turned fantastically in the pit to make it 7-4.

Myriokefalitaki grabbed one back for the Blue and Whites via a scrappy goal that barely crossed the line, but Simone Van de Kraats made it 8-5, punishing the Greeks on the counter with ninety seconds to go in the quarter from a great work on the right from Moolhuijzen. Lola Moolhuijzen, on her debut, then turned goal-scorer herself, with a fine finish from a tight angle in the left to give the Dutch breathing-space going into the second half.

The Greeks were struggling to feed the pit, but credit had to go to the fierce Dutch defence, pressing and dropping intermittently. You got the feeling that if they were going to get back into the game in the second period, they needed to be more incisive and clinical in front of goal.

But it was the Dutch who scored the first goal of the 2nd half – more fantastic work in the pit from Sevenich led to Vasiliki Plevritou’s exclusion, in which Van der Sloot converted from with a powerful shot from the right-post.

The subsequent minutes were end to end, with a few wayward shots from both sides (Kontogianni, Plevritou, Rogge, Patra and Sevenich). You sensed the Dutch were cleverly slowing the pace of the game down, to consolidate their now 5-goal lead. The intensity of the game dropped slightly, but the Dutch seemed content to limit the Greeks to speculative and low probability efforts only.

However, there were two very decent chances before the quarter was done for Greece – Maria  Myriokefalitaki and Eleftheria Plevritou having similar chances on the left, but failing to find the back of Laura Aarts net.

Into the last, it seemed unlikely that the Greeks would produce enough going forward to get anything out of the game. And this problem was exacerbated when the Dutch were awarded a penalty within the first attack. Lola Moolhuijzen, who plays her water polo in Greece, stepped up, and netted her second of the game.

Alexia Kammenou was not impressed that her side now trailed by 11 goals to 5, but even her intervention at a timeout could not spur a much needed Greek goal.

Maxine Schaap made her mark in the game with a perfectly executed man-up move by the Dutch from Maria Myriokefalitaki exclusion to put the result beyond doubt – even with six minutes to go in the game.

It was just an off day for the Greek attack. Nothing seemed to be coming off. They hit the bar from Christina Siouti and Ioanna Chydirioti attempts, but they just couldn’t find a way to make an impact on the Dutch scoresheet.

Eventually Maria Myriokefalitaki netted her second in the game, with a decent finish at the back post. But following the trend of the game, they could not produce any momentum, as moments later, Maud Koopman extended the Dutch lead once more (13-6).

Eleftheria Plevritou got her hat-trick, but it was hardly a consolation.