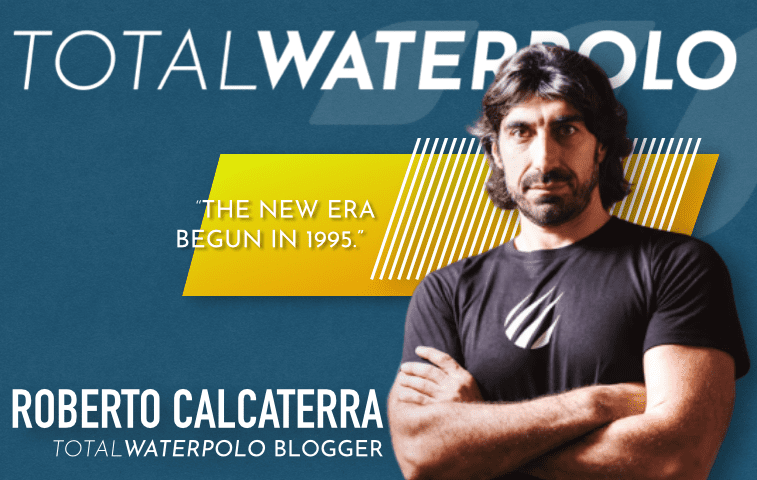 The series of the expert columns we continue with Roberto Calcaterra, who won two gold medals at the European Championships and the crown at the 1994 World Championships playing for Italy. He evoked the memories of his appearances at the Championships and wrote something about Budapest 2020.

I will never forget the letter that arrived in my club SNC Civitavecchia in September 1990: “The athlete Roberto Calcaterra is called to join the national team at the Acqua Acetosa sports center in Rome, by order of the head coach Ratko Rudic.”

Ratko Rudic, the man who changed the face of Italian water polo, wanted me with him from his first training in Italy … Our shared journey ended after ten years with the Sydney Olympics.
My mentality has been changed. The spirit of sacrifice for the team became the life rule. All that made me understand that there is no result without effort (#nopainnogain) and made me a winner.

The 1995 European Championship in Vienna was, in my opinion, a turning point in the world water polo.

After winning the World Championship in Rome in 1994, Rudic completely changed the formation of the Italian national team: only five players from the prior team remained in the squad, and many new, young players joined.

Months of hard work in the gym and the water, hours and hours of meetings and iron discipline formed a team that won gold in Vienna without any problems.

The game speed and reaction times have been changed radically compared to the World Championships in Rome. It was the beginning of a new era. All teams began to adapt, and shortly after, the phenomenal Hungarian generation came to the stage.

Alessandro Campagna succeeded Rudic as a national head coach. Guided by Campagna, Italy immediately won a new medal – silver at the European Championships in Budapest in 2001. The victory in the semifinal against the Olympic champion Hungary will remain among my best memories in the fantastic scenery of the Margaret Island.

After so many years, he is always the one who makes the history of Italian water polo: Alessandro Campagna.

Winning and charismatic coach, also forged by the “Factory Rudic”, who has been able to trace his way with methodology and innovation … leaves his mark with Olympic medals and world gold.

Campagna comes to the European Championships in Budapest with the world champion team, a cohesive group. The impressive individual of Francesco Di Fulvio, recently chosen the best player in the world of 2019, stands out from this coherent group.

Italy is a complete team in every way: speed and organization on the changes in front, capillary attention in defense, quality of the shot.

Special attention, and it could not have been otherwise, I give to my role, to the center-forward position: spotlight on Matteo Aicardi (whom I respect a lot), a player with an excellent technical background. In the past four months, Matteo had a low number of minutes in the Champions League with his Pro Recco. But, knowing the stubbornness and the desire to demonstrate his abilities, it will be a pleasure to watch this boy in Budapest.

Most likely, Campagna will use the European Championships to prepare the team for the Tokyo Olympics and discover which players should be members of the group that aims to win the most valuable medal at the Olympic Games . But, as in all important events, along the way, the desire to win grows, abandon the experiments, and heads straight to the final victory.

Good luck, Italy … leave your mark at the Championships (#leaveyourmark).