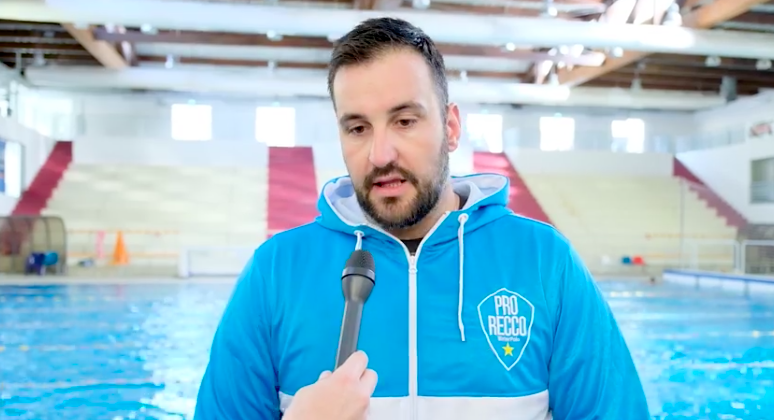 Day 12 of Champions League puts all eyes on Niksa Dobud making his debut for Pro Recco in front of fantastic Hungarian fans. In the other game played on Hungarian ground, Szolnok needs to halt group-leader Jug’s unbeaten run in order to stay on board.

In Group A, Super Cup winner Ferencvaros (HUN) takes on Pro Recco (ITA) which has already secured the top spot. The game is already sold out in Budapest, by the the Hungarians will know if their qualification hopes are still in danger or not. It depends on the outcome of the other big match of the day between Barceloneta (ESP) and Dynamo (RUS). Either way, Hungarian fans will have the opportunity to see is FTC ready for a big result this season and also witness the return of Niksa Dobud, one of the best center forwards in the world before he got suspended 4 years ago.

“I am very excited to return to play an official match after four years, I can’t wait for the game to start. I feel good physically, I’ve been training with the team for two months and before my arrival in Recco, I did four months of dryland training with my coach in Zagreb. I know, it won’t be easy after a long pause, but I’ll do my best.”

“Pro Recco is one of the strongest team in the competition that is still unbeaten this season. We are facing injury issues but we need to stand up and will be ready to give 100 % in this game in front of our supporters.”

Barceloneta is still battling for the second place but with an upset Dynamo may close on Ferencvaros and if the Magyar side loses to Recco, then only a point would separate them from the Russians and their trip to Moscow would turn into a live-or-die scenario on Day 14.

“With three matches remaining, we just need one more victory to qualify for the Final 8. Our objective is to secure those three points as soon as possible against this rival who also has a chance to qualify provided it could win all their remaining matches. So we expect a hard match against a physically very strong opponent with some talented individual players. We’re looking to win with the help of our fans and then book the tickets for Hannover!”

We need to beat one of the best teams not only in our group but also in the whole Champions League if we want to get to Final 8. We must show all our best and play without mistakes. I believe we can do it.”

In the other two matches, Steaua (ROU) tries to catch Eger (HUN) to finish their home campaign on a high, while Brescia (ITA) is expected to cruise on in Belgrade (SRB) to keep its second place.

“We have to stop the important players in order to achieve a good result against a very good team like Eger. I am positive and I think we can do it!”

“Last year we had a really hard match against Steaua. I know that they are getting better and better, because of gaining more and more Champions League routine.”

“Although the Italian side has a lot of great players we’ll give our best to earn the first points in front of our home crowd in Belgrade. We hope we can pull off a surprise win.”

“In Belgrade, we have to play strong and concentrated: we absolutely want to defend the second position, so we have to gain three points. We don’t have to look at the rankings, Red Star is a young team and for sure, in their pool, the Serbians will play with enthusiasm and aggressiveness. We don’t expect an easy challenge.”

Group B will offer the biggest showdown of the round as Szolnok (HUN) faces Jug (CRO). It’s another re-match of the 2017 final and the Hungarians’ only hope is to beat the group-leaders in order to stay in the race for the third place. Szolnok would be the first team to catch Jug this season in the Champions League as the Croats played ties in both their most ‘dangerous’ away matches, in Piraeus and in Busto. While Jug, winner in 2016, sits relatively comfortable in the first position, Szolnok needs all three points badly to set themselves up for a game with BPM (ITA) on the last day. On Day 3 it was an extremely close match when Jug won 8-7.

“We will meet the strongest team not only of the group but also of the league, we could say. They line up Olympic and World champions and are guided by an excellent coach Vjekoslav Kobescak. We have only been working as a team since Tuesday night since eight members of our team played at the European Cup finals in Zagreb. We are expecting to have a very difficult ‘life or death’ encounter. We will be doing our best to earn those very important three points.”

“I gave our national team players a few days of rest and we are not going to approach this match as we usually do. This is going to be a tough one but I hope we can still stay unbeaten after twelve rounds.”

The other two big rivals, BPM and Olympiacos (GRE) are set to pass German test. The Italians seemed to have an easier task as they play Hannover at home while the Greeks travel to Berlin, but Olympiacos proved in the last round that it could handle the challenges easily as they beat Mladost (CRO) soundly in the previous round in Zagreb.

“The upcoming game is a very insidious one because, despite with few points in the ranking, this team is full of quality that had made us suffer a lot in the first leg. It’s a difficult team to play with, also because they don’t worry about the result since they have already qualified. At the same time, we eye only one result: we must win. I’m convinced that our team is mature enough to bear the duty of that. “

“Eight weeks to the Final 8, and we want to play good water polo. If it’s possible to catch some points, we will bring them back to Hannover. Except for Giorgetti, all our players are fit.”

“We are the underdogs in this game, but the earlier comparisons with the Greeks show that we are not without a chance even against top teams if everything is in place: attitude, physical and mental presence, daily shape and individual ability. We will not give away any points easily, that is our principle.”

Mladost is on a five-game losing streak which they definitely want to halt against fellow Croatian side Jadran in a match where pride and prestige are at stake.

“This is the last game for us in front of our audience this season. We will do our best to offer our fans a great water polo match and a true spectacle. I hope we will have full stands and enjoy their support and of course win this game to finish our Champions League season properly.”

“We won our first quarter-final game against Solaris in Sibenik, we didn’t play a great match, but we did what we wanted to do, to win a match. Now we can focus on Saturday’s game against Mladost. It is a match without pressure for both teams, but still we want to win every game we play. We drew one and lost two against Mladost this year, but we feel we can do better.”