Novi Beograd beats Marseille;Ferecvaros edges out Jug to set up replay of 2021 final 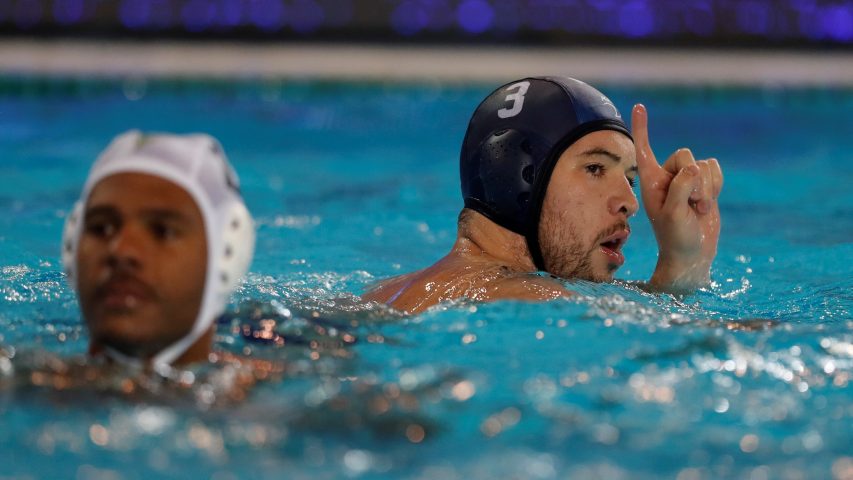 Novi Beograd will play in the Champions League semifinals for the first time in its history. Ferencvaros continues the tradition and advanced to the semis for the third time in a row.

Novi Beograd and Ferencvaros defeated Marseille and Jug respectively in the evening session of the quarterfinal day at the SPorts center “11 April” in Belgrade.

Novi Beograd beat Marseille by six goals in the third quarterfinal (16:10). The hosts broke the French in the middle of the game. They netted five goals in a row to jump from 7:6 to 12:6 and that was vital for their victory.

The last match of the day was a thriller with a few twists and turns. Ferencvaros defeated Jug narrowly (14:13)

Brescia and Novi Beograd will play in the first semifinal tomorrow (18:30 CET). These two teams have met twice this season. The match in Belgrade ended in an 11:11 draw. Novi Beograd defeated Brescia in Italy (16:13)

The second semifinal game will be a replay of the 2021 final, Pro Recco – Ferencvaros (20:30). Last year, Recco recorded a 9:6 win. Ferencvaros will try to take revenge tomorrow.

Novi Beograd took off to a flying start, scoring two goals in the first minute (Mandic’s from a penalty and V.Rasovic’s from a counter-attack). Marseille allowed two quick goals at the beginning, but they also responded quickly. After two and a half minutes of play, the score was 2:2. Novi Beograd dictated the pace in the first quarter. The hosts re-built a 2-goal lead in the 7th minute (Vasilije Martinovic) – 5:3, but the French halved the distance before the first break.

The hosts opened the second period the same way as in the first – with two back-to-back goals. In the 11th minute, Strahinja Rasovic converted a man-up to stretch the margin to three (7:4). Still, Marseille was able to come back and came very close (6:7). However, Novi Beograd had a 3-goal advantage at halftime. Drasovic scored a power-play goal a minute before the middle break. Youngster Vasilije Martinovic closed the first half in the last second, with a goal after a nice assist by Angelos Vlachopoulos – 9:6. 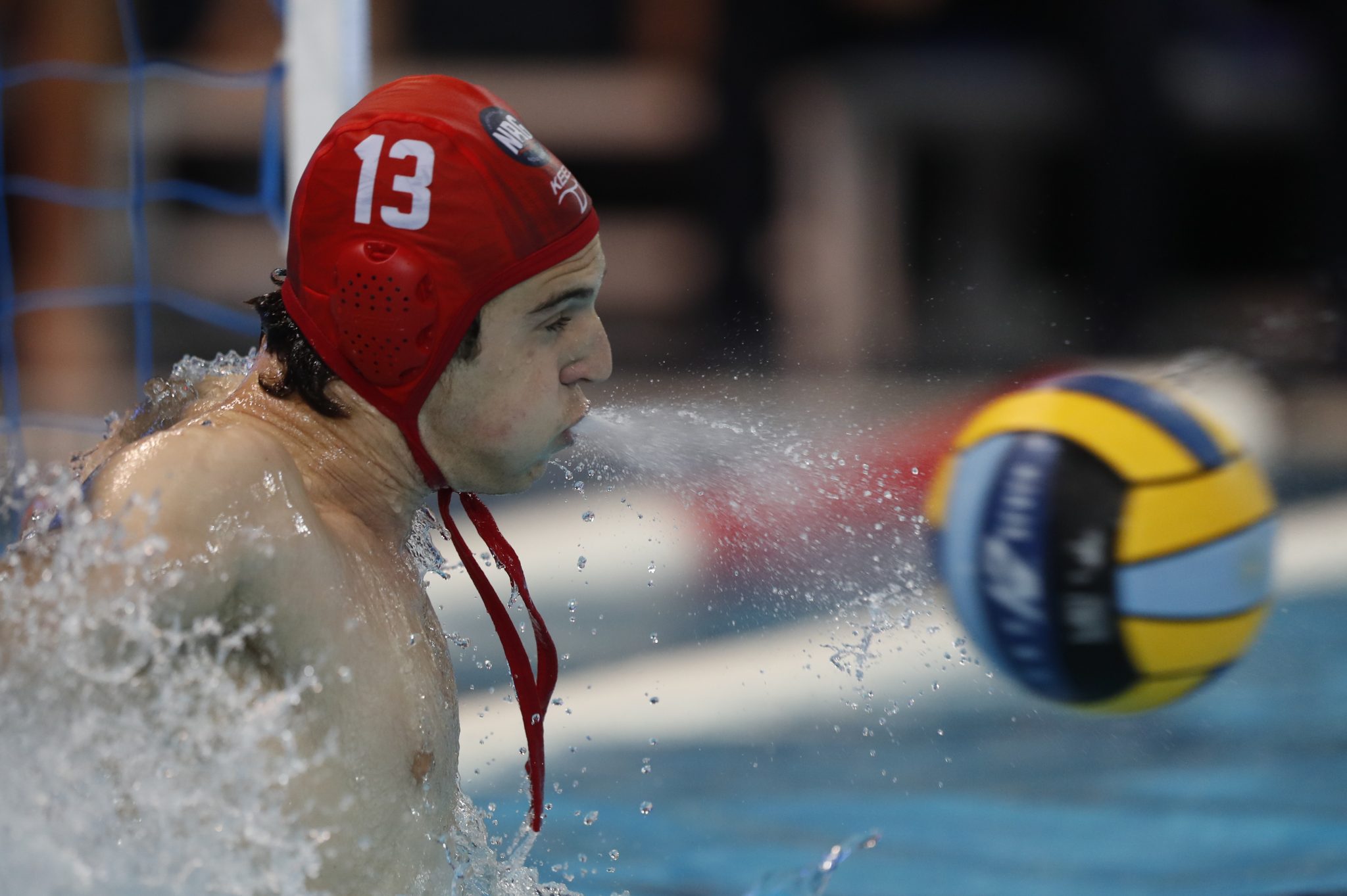 Young Brazilian Joao Pedro Coimbra, Igor Milanovic’s first pick for a goalkeeper today, did a good job, especially in the third quarter, which was decisive for the outcome. Coimbra posted several excellent saves in this period (he finished the match with 16 saves). Coimbra’s teammates helped him with a disciplined play in defense. Dusan Mandic netted three fine long-distance goals at the other end of the pool, and the Serbian champion jumped to a 12:6 lead. After five straight goals by Novi Beograd, Andrija Prlainovic, who was the French’s power engine today, broke Marseille’s silence for 7:12, but it was too late.

Novi Beograd secured a ticket for the semifinals in the third period, but they lost Dusko Pijetlovic. The great center-forward, who got injured in the middle of this quarter and wasn’t able to return in the water. Still, he will be ready for the semifinals.

Early in the fourth period, Marseille reduced the gap to four (8:12), but Novi Beograd controlled the match and regained a 6-goal lead. 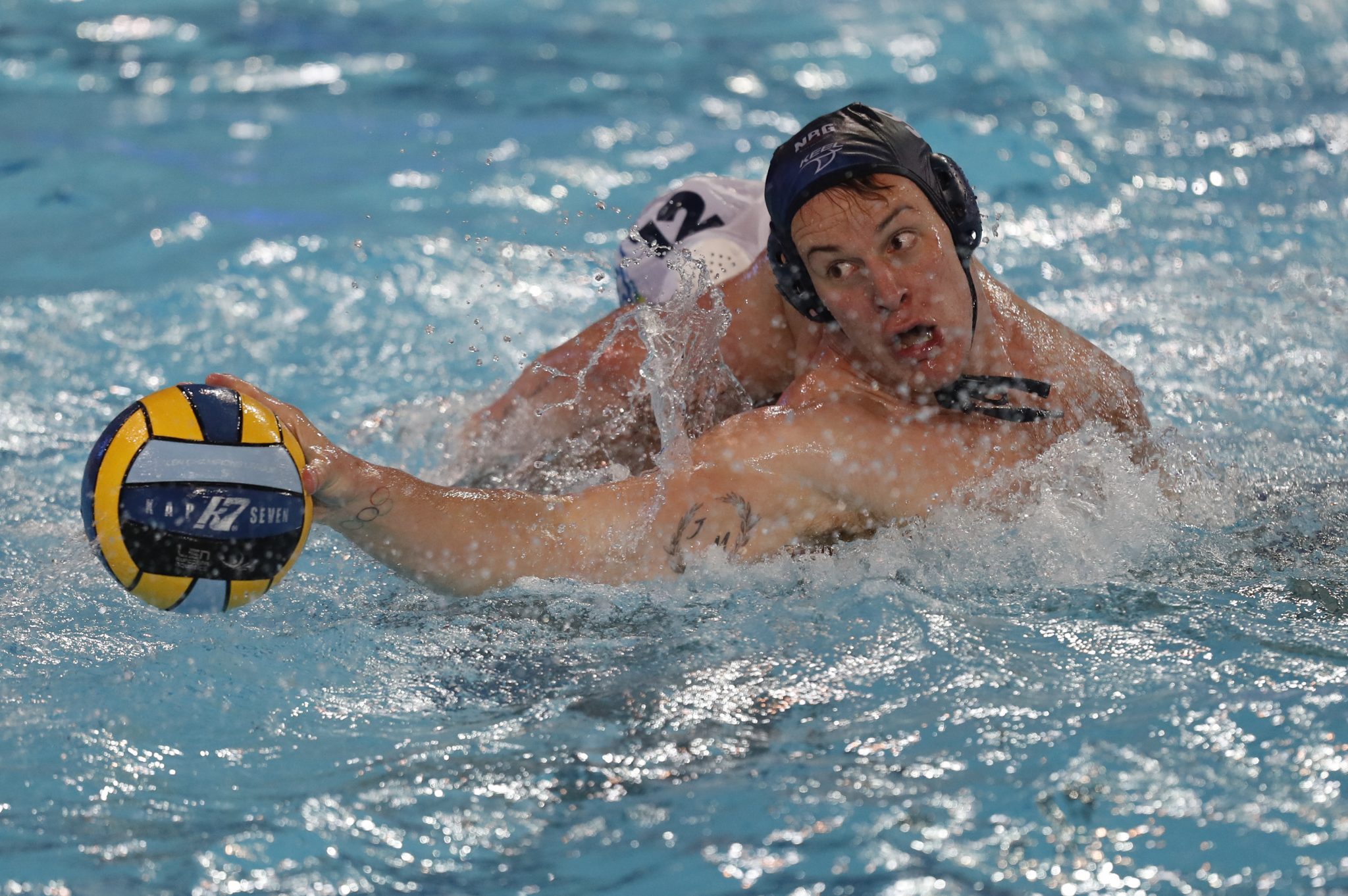 Novi Beograd’s captain Dusan Mandic scored five goals from as many attempts. The winner of the 2021 Total Player award was delighted after the match:

“We have to be satisfied with how we played against a respectable opponent, as Marseille is. After the domestic season we focused only on the Champions League quarterfinals. We prepared well, our goalkeeper did a good job. Tomorrow, we will play another match against an excellent team. But, we have already played against Brescia (11:11 and 16:13 – Ed), and we know more about them than about Marseille. We will try to eliminate some of the errors we made today and play even better tomorrow. We go on.”

Two days ago, we wrote that the pool “11 April” has become Jug’s reserve pool for this season because the Dubrovnik-based side played eight games here before the F8. But, Ferencvaros’ players felt like they were home.

They had “an extra player” during the whole match. A large group of Ferencvaros’ fans, who are very devoted to the club, was in the stands. 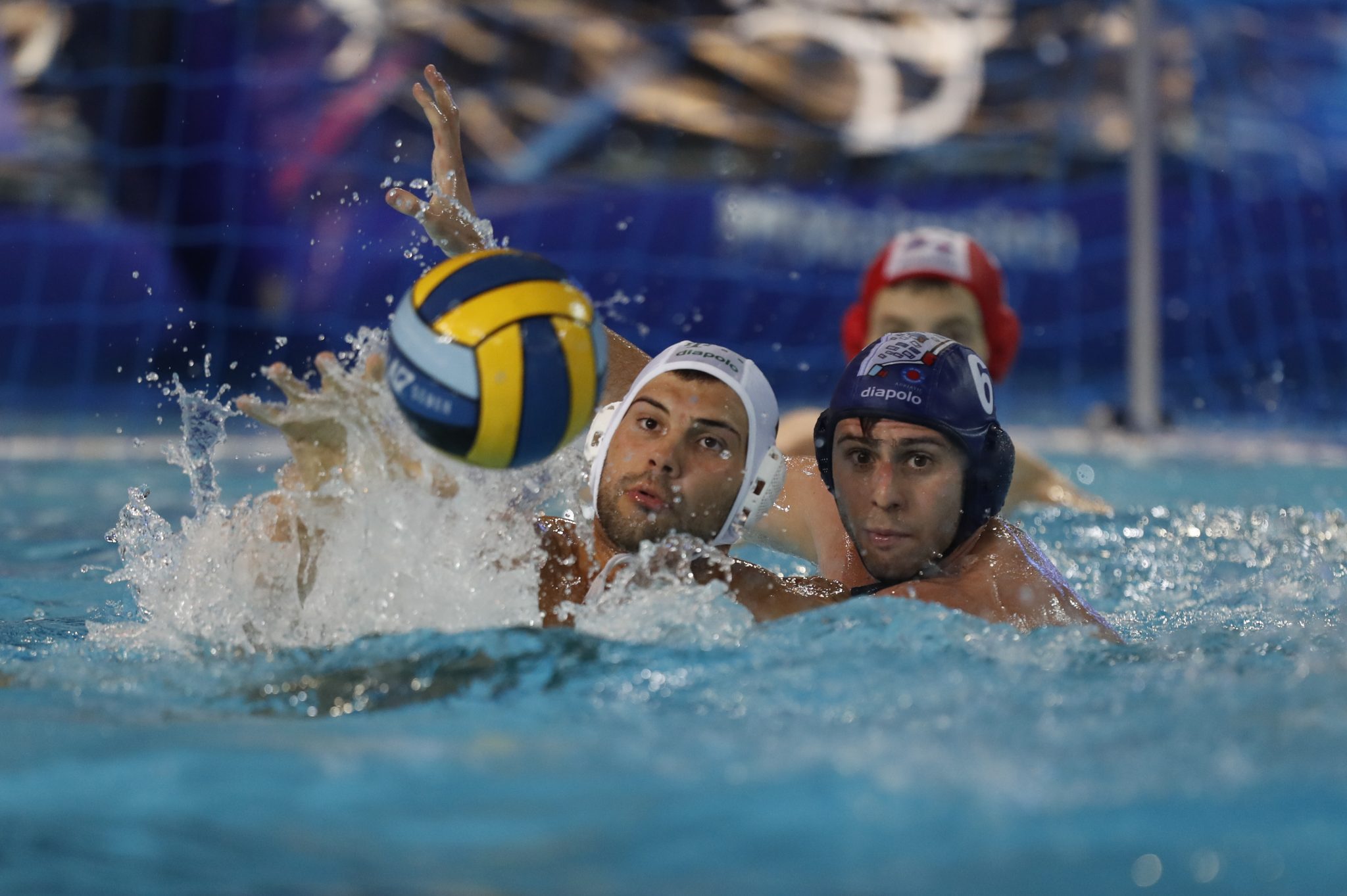 The Hungarians rushed to a 3:0 lead by the middle of the second quarter (Vamos 2 and Pohl). Jug, which arrived in Belgrade without an injured Hrvoje Benic, recovered from an opening shock and started coming back. The game was a “tit for tat battle” for the next several minutes. Each team scored five goals. Ferencvaros kept a three-goal distance until the middle of the second period (8:5).

Two and a half minutes before the middle break, Marko Zuvela scored an action goal for 7:8. A minute after, Jug earned a man-up and an opportunity to equalize with an extra player. But, Loren Fatovic had his shot blocked. Shortly after, Alex Papanastasiou hit the post. Daniil Merkulov doubled Ferencvaros’ advantage, but three seconds from the end of the period, Zuvela added his third goal for 8:9.

In the 20th minute, Jug finally caught up with the Hungarians. Alexandros Papanastasiou scored from a counterattack for 9:9. Vendel Vigvari replied immediately, but the referees annulled the goal after a VAR check.
The oldest “member of the Greek colony in Dubrovnik”, Stylianos Argyropoulos, put the Croats in front, scoring an action goal (22nd minute) for 10:9. Denes Varga leveled at 10:10, but the Croatian champion had a slim lead at the last break, as Maro Jokovic found the net for 11:10 immediately after Varga’s equalizer.

Argyropoulos doubled Jug’s advantage. However, then came Denes Varga, who netted two goals in 45 seconds and the teams were equal again – 12:12. A big drama was reaching its culmination. Jug was in front again after Papanastasiou made it 13:12. But, Merkulov answered quickly -13:13 (29th minute). After that, both teams tightened their defenses. A minute and 44 seconds before the final buzzer, Szilard Jansik hit the back of the net from the perimeter – 14:13. It turned out that it was the final score. Jug had a man-up in its last possession. Maro Jokovic missed with 11 seconds left on the clock and Ferencvaros advanced to the semifinals. 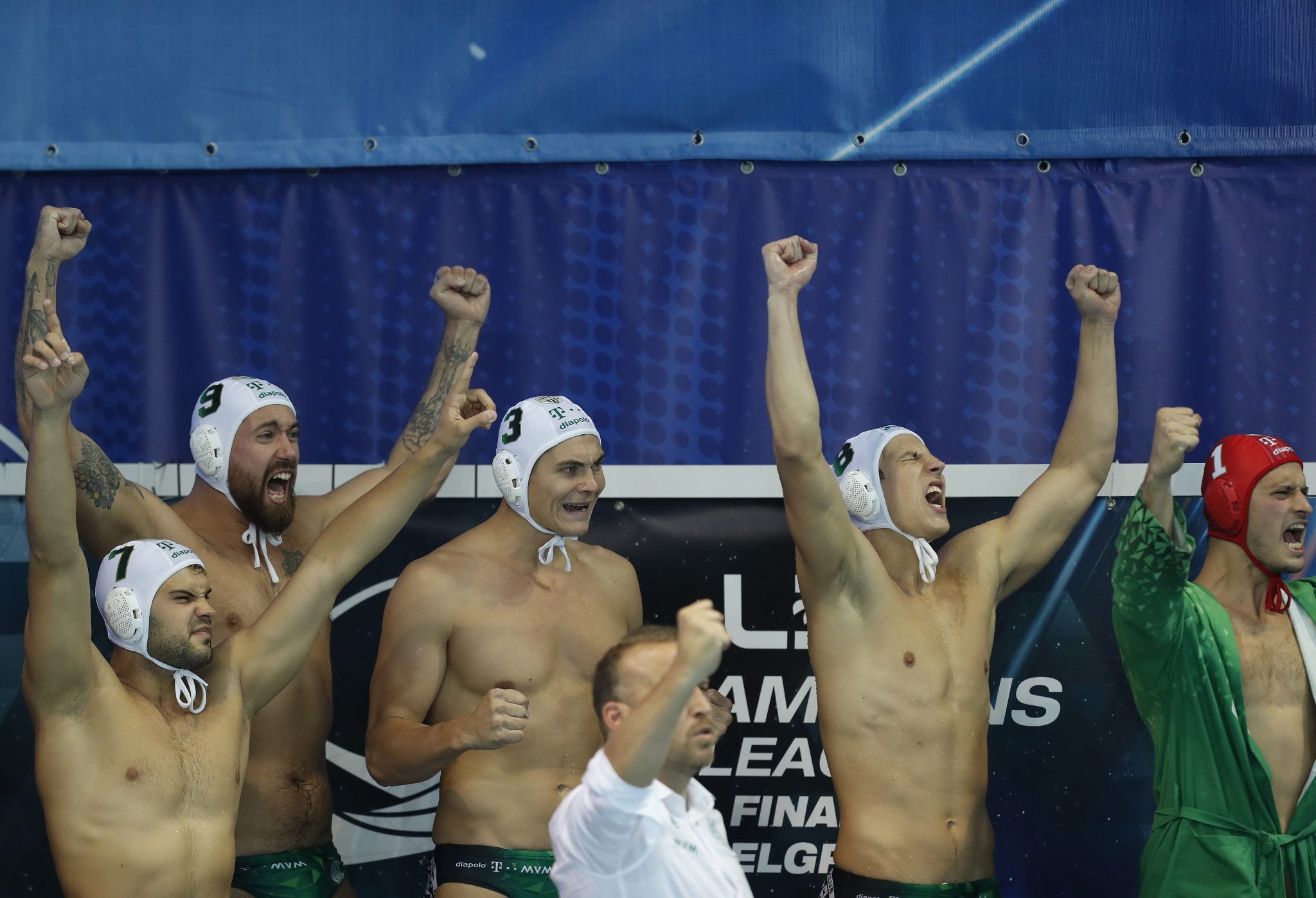 “I congratulate to Jug and my former teammate Vjekslav Kobescak (the two played in Mladost – Ed). We had a very good start. But since the second quarter we had a lot of problems with an exclusions. Some of our key players, like Denes Varga and Marton Vamos were pressured by two personal fouls. That changed the course of the game and our play. But, we started coming back step by step, and our defense worked well. So we achieved out first goal here in Belgrade. Now, we are starting to prepare for the next big challenge.

“I’m proud of my team because we managed to come back, although we had a terrible start. In the second quarter we found our rhythm, we improved our defense. Unfortunately, we didn’t keep our rhythm until the very end. We are very disappointed after the loss, but we’ll do our best in tomorrow’s semifinals for places 5th-8th.