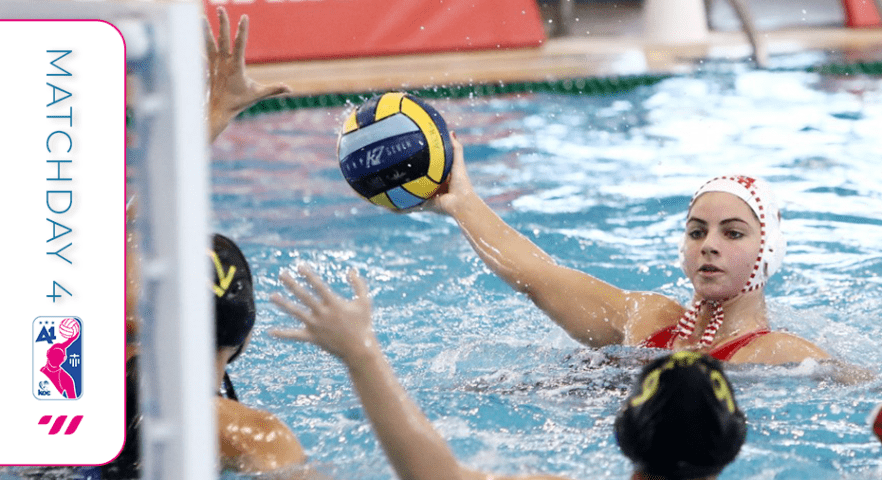 With many of Europe’s top women’s leagues suspending or postponing a number of games in the coming days due to the World League Super Finals, matchday four of the Greek A1 featured a full slate of games.

The story of the matchday was that there were no big shocks, but some emphatic results; Olympiacos kept a clean sheet in a 16-0 rout over AEK, while Alimos were the only other team to have won all four games this season, defeating Larissa by eight scores, 18-8.

Glyfada confidently dispatched Peristeri, while Ethnikos has two wins in a row after putting PAOK to the sword. Patra defeated Rethymnou in Chania. In the midweek game, Vouliagmeni showed their class against a spirited Panionios.

AEK was annihilated 16-0 by Olympiacos this afternoon. Even with the likes of Eleni Xenaki, Eleftheria Plevritou, Margarita Plevritou, Vasiliki Plevritou, Nikoleta Eleftheriadou, and Ioanna Chydirioti rested by Olympiacos Head Coach Alexander Ciric, the reigning champions asserted their dominance ruthlessly in attack, and keeping a clean sheet in defence.

Stefania Santa and seventeen-year-old Amalia Chirstodoulou-Out secured a hat-trick in the game, while there were two goals for the excellent Sofia Tornarou – who was yesterday called up to Alexia Kammenou’s senior Greek squad after a string of good performances.

AEK have a must-win relegation battle next weekend against Rethymnou, while Olympiacos travel to Panionios.

Alimos is one of only two teams in the league to remain unbeaten, having won all four of their games, including today’s match against Larissa. The ten goal margin perhaps flatter Alimos in this match, but the quality of their team helped them to three more points today.

Alexandra Asimaki scored four times in the match, as did the talented young Nefeli Chaldaiou – whose recent performances have warranted a senior call-up to the national team.

Larissa have a tough task of winning their next game, when they host Glyfada. Alimos have a potentially tricky match when they travel to Patra.

Glyfada bounced back from a horrible defeat last week against Ethnikos with a confident display against Peristeri. It was a lightning fast start that helped Patra Vangelis’s team unsettle Peristeri, leading 5-0 after the opening quarter, and 9-1 at the turnaround.

Glyfada has four players joining up with the Greek national team on Monday; Ninou, Fountotou, Karytsa and Moustakaria.

Peristeri are still without a win, and they might not get a better chance than next weekend at home to PAOK.

Ethnikos followed up their storming performance last week against Glyfada with a fairly routine victory in Thessaloniki against PAOK this afternoon.

The game might have been close in the first period, but Ethnikos started to control the game in the second to take an 8-3 lead. From there, PAOK, who have not won a match all season, could not recover.

Patra have won for the second time this season, picking up three points for the  first away contest this season.

Michallis Lazaridis’s side were well beaten by Olympiacos last week, and hadn’t won since the opening day against AEK, but they were comfortably the better side today. Ephrosyne Tsimara netted five, while Denia Kureta bagged a quad.

While Elliniadi will take the plaudits for the goals in attack, Kiki Liosi’s team can be proud of an excellent defensive display throughout the game. The Nautical club are now up to third in the league.

Vouliagmeni have a huge derby coming up next against Ethnikos, which will show us a lot about Kiki Liosi’s team.